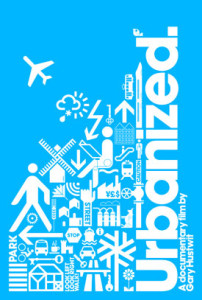 Urbanized is a documentary film about city and urban planning. It is the third documentary film by Gary Hustwit to explore design as it relates to people and the modern world. His first film, Helvetica, was about print design and the namesake typeface, and his second, Objectified, about physical objects and product design. Urbanized skips the history of the subject and dives right in to case studies of different cities around the world, as expressed by city officials and urban development specialists, much like the narrative and pacing of his previous films.

There are many cities he could have covered in this documentary, but his choices were purposeful. He covers quintessential and obvious cities such as New York and Paris, as well as evolving and progressive cities like Bogota, along with the slums of Mumbai and Santiago. It is in these unexpected cities that Hustwit’s urban planning philosophy reveals itself.

Enrique Penalosa inadvertently sums up the philosophy that led his initiatives in Bogota where he was mayor, by stating,

The film proceeds from the World Health Organization statistic that 75% of the human population will live in cities by the year 2050, and though the specific problems in each of the cities studied are different, the answers seem strikingly similar – to design as if life matters.

Throughout the film it is apparent that Hustwit agrees with this perspective. He offers Phoenix and Brasilia as examples of misinformed urban plans where suburban sprawl and big-picture development reign. These case studies reinforce the importance of designing cities with an emphasis on quality of life, where sustainability awareness can curtail many of their difficulties.