“Any human will blossom in a hundred unexpected talents and capacity simply given the opportunity to do so.” —Doris Lessing 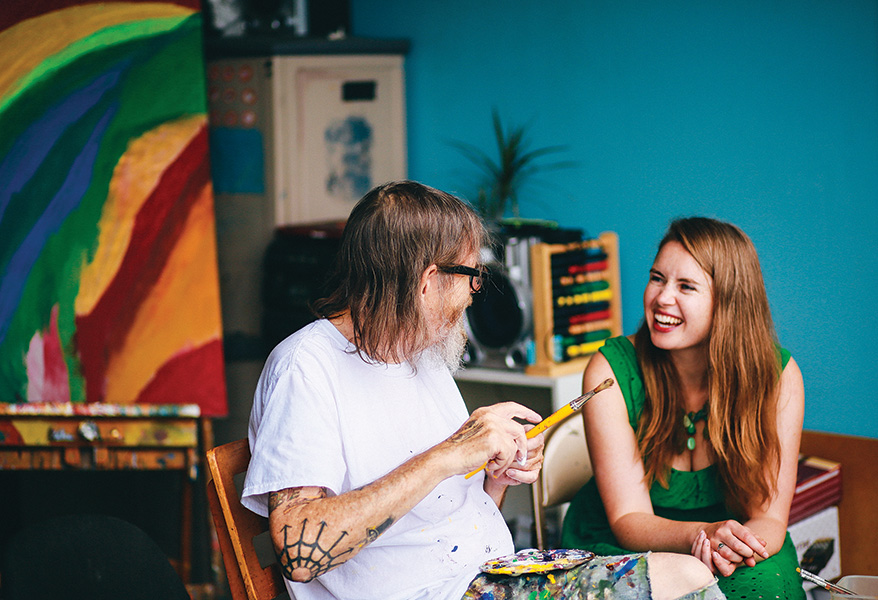 Liz Powers has dedicated her life to empowering others through art as a co-founder and leader of ArtLifting. Liz surrounded herself with art from an early age. She took her passion with her as she began a career in social work at the age of 18, finding ways to interweave art into her practice even before she realized its business potential. She recounted, “when I did volunteer casework in college many of my clients who were homeless or had disabilities told me they felt lonely. I decided to create art groups in shelters as a way to help combat this common feeling of loneliness.” As her career progressed at various shelters and disability centers, she would frequently find residents’ art pieces strewn in dark closets or forgotten in basements. Thanks to her art background, Powers recognized the quality of the art and the untapped power of artistic expression for healing in marginalized communities.

Art’s capacity to fulfill human needs inspired Liz and her brother Spencer to co-found ArtLifting in 2013. Organized as a for-profit social enterprise benefit corporation, ArtLifting is a purpose-driven organization that gives artists living with homelessness and disability a platform to share and sell their artwork. Liz Powers believes that thriving comes from people’s ability “to have the freedom to be happy and express themselves.” In working with these communities, people would often say, “Liz, I want an opportunity, not a handout.” Opportunity is the motivator of the human spirit. ArtLifting not only values and enables creative expression, it allows artists to find economic success through their own merit. Presenting and showcasing their work at a national level, artists receive 55% of the profit from the sale of their art. Creating an economic path to independence empowers the artist, but not all value is economic.(1)

Powers believes that, “True dignity is found when people feel valued and recognized. Many need a nudge and an opportunity in order for their creative talents to be seen.” She aims to instill a sense of confidence and courage and works to enable people to overcome the disequilibrium in their lives through the sale of something they love to create. The profound impact that ArtLifting has on people can be visualized with Maslow’s Hierarchy of Needs. Psychologist, Abraham Maslow presented his influential pyramid in his 1943 paper, A Theory of Human Motivation. According to Maslow, humans must fulfill a set of needs to achieve a level of self-actualization that unlocks a deeper understanding of self and creative expression. Maslow’s work has been used as a framework for personal growth and to develop successful cultures within organizations to enable thriving. 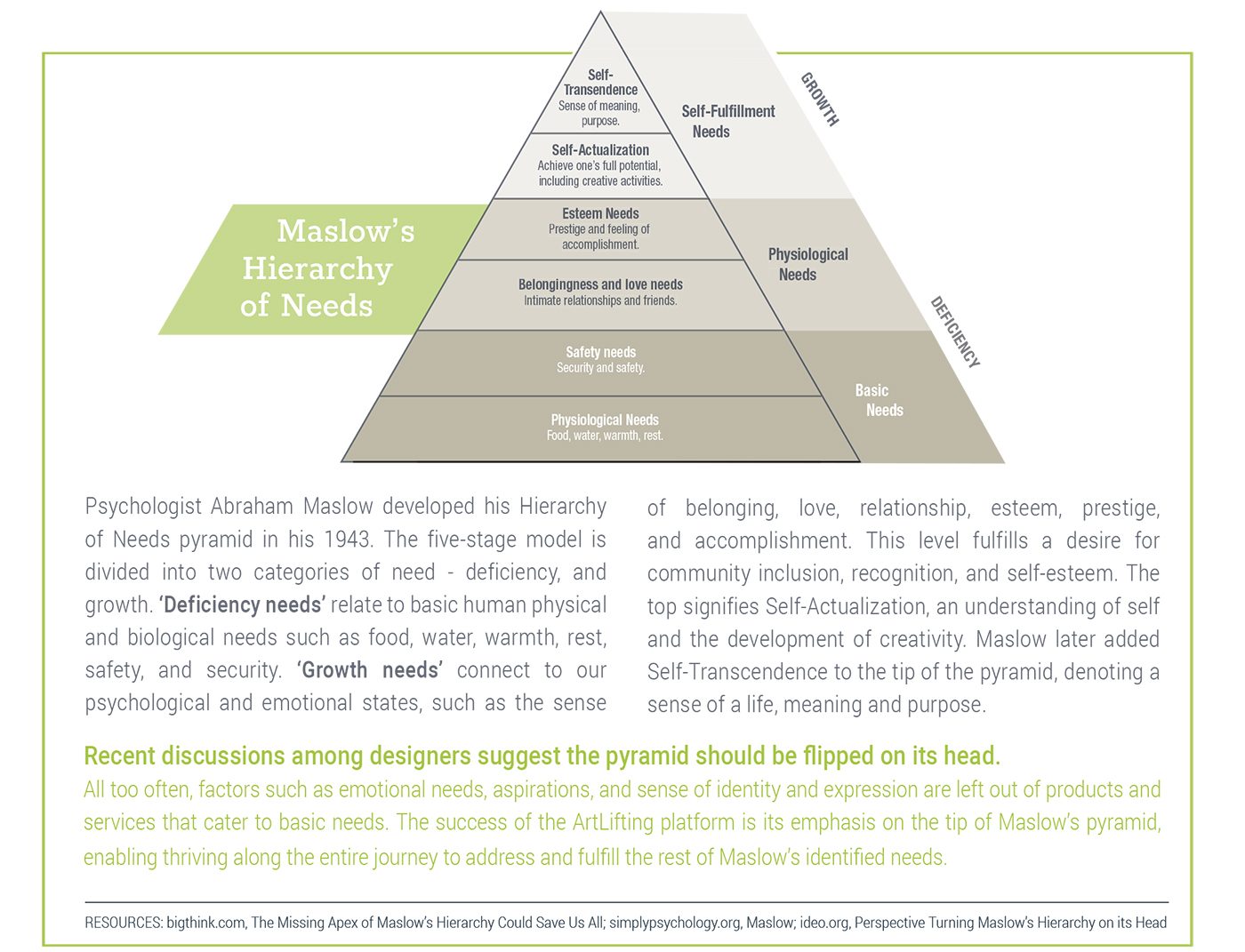 Powers recognized the connection between art and organizational culture early on and seized the opportunity to sell much of its art through partnerships with corporate clients. Organizations are eager to work with ArtLifting, as they experience the direct correlation and benefit of art to worker productivity. Studies have shown that workers are 17% more productive when they work in enriched spaces designed for people. According to Google real estate project executive John Moran, Google developed the Art@Google program to “create amazing work environments and experiences that help Googlers perform at their best every day.” An early ArtLifting partner, Google identified what a joint survey from the Business Committee for the Arts and the International Association for Professional Art Advisors revealed in a 2003 survey – that art in the workplace reduces stress, increases creativity, and encourages communication and the sharing of opinions.(2)

In a world that is dominated by technology and guided by data, machines can amplify our productivity and knowledge, but art makes a connection to people and their stories. Rather than simply offering decorative artwork, ArtLifting shares their artists’ personal stories of heartbreak, courage, hope and inspiration alongside their work. Art’s powerful effect on the human spirit is its ability to create empathetic touch points so people can relate better to one another. According to Powers, “art can activate a thriving culture by creating connections among people who don’t normally interact, and to communities that largely remain invisible. It helps create empathy. It gives you a viewpoint to understand someone else’s perspective and to learn their story.” By connecting viewers to the life journeys of people living with homelessness or disability, ArtLifting becomes a touch point to our greater humanity. It connects us all to our deeply human need for dignity, creative expression and self-actualization, while threading disparate communities together through the experience of beautiful art.

Within five years, ArtLifting has grown to represent 140 artists nationwide selling in 20 states. Their art can be viewed in the offices of Google, Microsoft, LinkedIn, and Starbucks as well as the retail spaces of FedEx and West Elm. 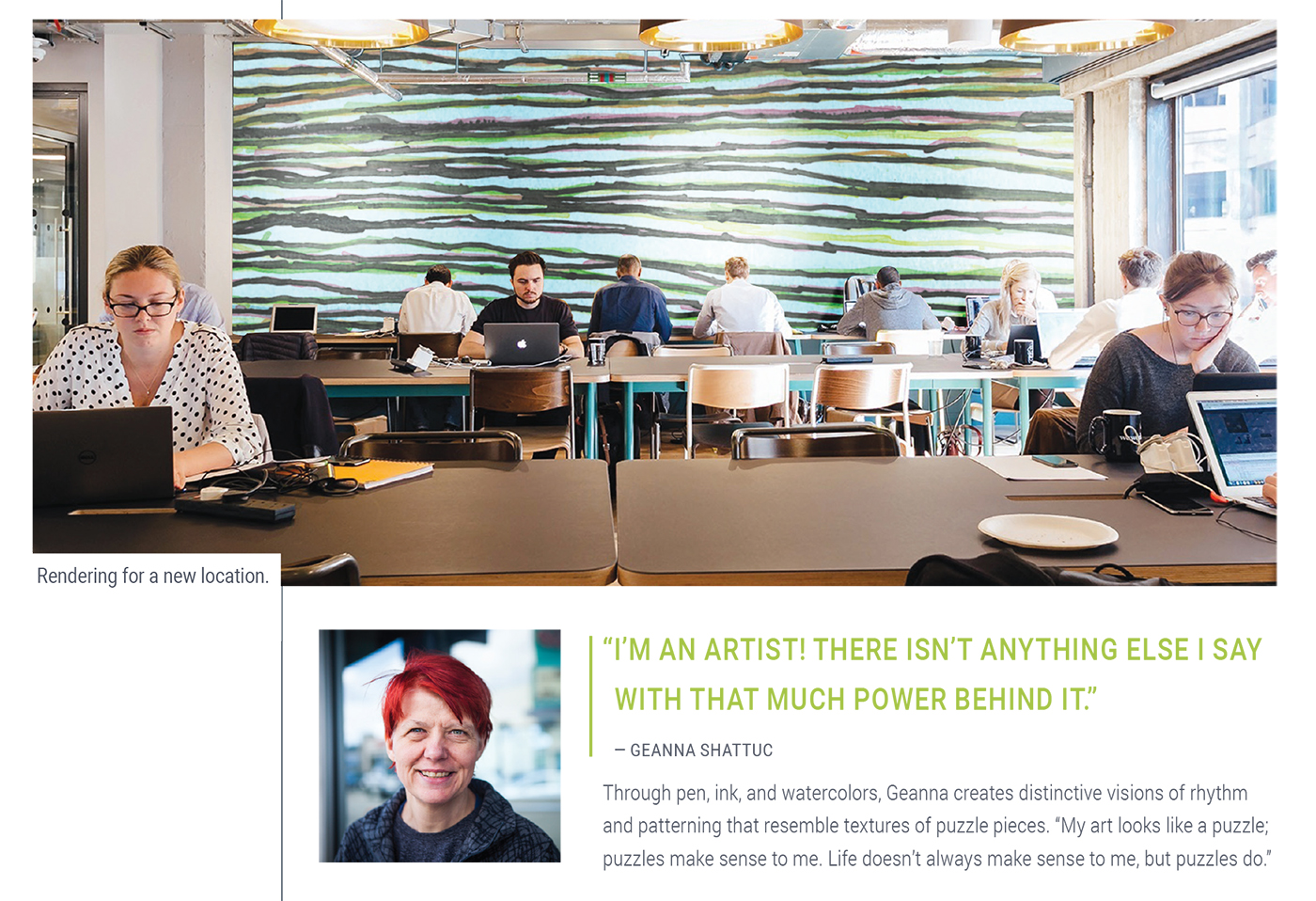 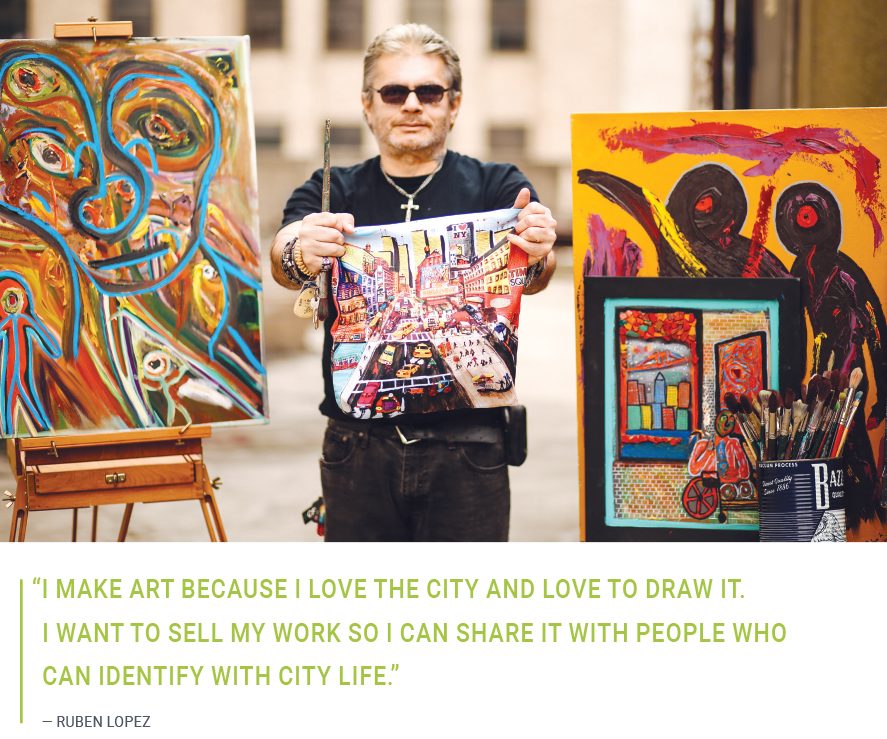 Lopez, who has experienced homelessness and addiction was inspired to become an artist attending an art
therapy program at Bellevue Hospital. Lopez paints the city that he sees around him and while part of Fresh Art,
a NYC non-profit that produces public art exhibitions at various venues throughout the city. He gives back by
volunteering at the Bellevue Chemical Dependency Outpatient Program in Manhattan.

STRATEGIES IN ACTION:
>> LEAD to create financial and cultural value.
>> RECOGNIZE and value people.
>> ENRICH spaces designed for people with art that connects people and their stories.