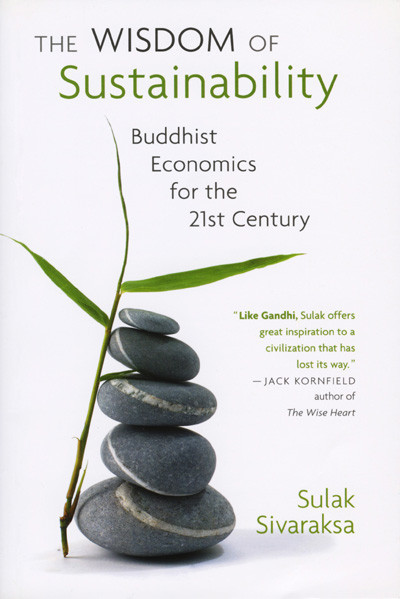 The Wisdom of Sustainability: Buddhist Economics for the 21st Century

“National security,” “private property,” and “free-market capitalism” are current social structures that coexist with violence, economic disparity, environmental degradation, and religious intolerance. One alternative that puts the human dimension back into economics and can bring about a more peaceful world is Buddhist Economics— “Societies where people help each other in difficult times, where power is shared rather than fought over, where nature is respected and wisdom cherished” (p.30).

Sulak Sivaraksa is one of Asia’s leading activists, twice nominated for the Nobel Peace Prize and a winner of the Right Livelihood Award. He has founded a number of NGOs, is a visiting professor at University of California Berkeley and Cornell University, and advised the government of Bhutan on the Gross National Happiness policy and implementation. His economic theory continues E.F.Schumacher’s work “Small is beautiful: Economics as if People Mattered” which is a return to focus on small-scale economies. Simplicity and nonviolence are the keys of the theory. Bottom-up development and education are the keys of the implementation.

The Wisdom of Sustainability outlines the development of the current economic practices and the details of its absence of sustainability. Sivaraksa discusses the belief that the World Bank’s current policy on financing modernization left the developing countries to depend on industrialized ones. The book focuses on Thailand, his home country, as one of the examples of how the economy of globalization created the economic disparity and the loss of cultural diversity. He also illustrates how the indigenous Buddhist economy can be integrated into the current system to design peace into economics, especially in the “agricultural South” countries.

The points that Sivaraksa makes are powerful. He touches on both individual and global levels of sustainability, the importance of education based on holistic understanding of development that includes spiritually and culturally appropriate, and moral government.

Rather than focus only on Gross National Product (GDP),he illustrates how to measure Gross National Happiness (GNH): the degree of trust, social capital, cultural continuity, access to healthcare and education, social solidarity, and the level of environmental integrity.

It simply considers the opposite way of “mania for success” as he states: “Real success is not to conquer others, not to have more cars and money, but to appreciate what you have, how to share with others.”

The book encourages the strategic intent in defining an alternative economic model “as if people mattered”. The reader does not require a prior knowledge of Buddhism or economics to understand the lessons Sivaraksa intends to teach. Anyone who is interested in sustainability will benefit from his book and his open heart. “We should never think that our tradition is the best. We need to study and respect all traditions and practices…we can share peace with others. This is the foundation of true security”- Sulak Sivaraksa.