What is the number one US export? Corn? Aircraft? Garbage? These are definitely high on the list, but according to the founders of The Living Principles it is culture. Culture cannot be quantified in terms of dollars, yen, pounds or kilos. You will not find it on any top ten lists. However, standing on a street corner of any major city in the world, one would be hard-pressed to deny it.

The shared attitudes of the majority of Americans encourage the rest of the world to produce unsustainable levels of consumption and waste. It is evident through the cars, cuisine, gadgets, architecture, fashion, and music that other countries aspire to possess. Their familiarity with McDonalds, clamshell packaging, and the logical offspring – individually wrapped slices of cheese, make it apparent that the US is very influential. Think computers and big screen TVs that are replaced every two years because they are no longer aesthetically pleasing. Envision king-sized everything!

The Living Principles for Design is a sustainability framework originally conceived of by AIGA | the professional association for design. It was further developed and co-authored by Gaby Brink, Nathalie Destandau, Phil Hamlett and, as they are careful to point out, “with generous input and inspiration from an inter-disciplinary group of designers, authors, educators, strategists and business leaders.”1 The organization is made up of Partner/Endorsers, Ambassadors and an online Community. At its core are four streams of sustainability – environment, people, economy, and culture. The Partners are organizations that have adopted the principles and promote an understanding of the framework. 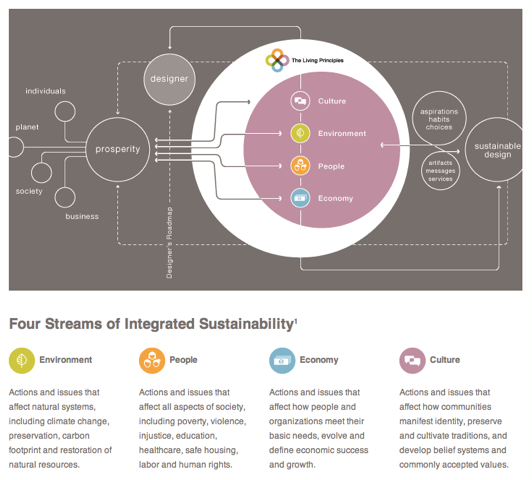 The Living Principles website is a tremendous resource which includes a calendar of events, a sustainability glossary (Words To Know), an online community and forum, and a video library of talks by designers, scholars, and business leaders. The framework is much like that of Triple Bottom Line, ratified in 2007 by the United Nations and ICLEI, Local Governments for Sustainability. But the addition of the fourth stream takes into account that unquantifiable and perhaps, most toxic US export – culture. To learn more about The Living Principles and make an important addition to your bookmarks, go to www.livingprinciples.org.