The Role of Education in Designing Wellbeing

I can still remember vividly, in my past life as a political science student, a classroom debate about whether or not education was a right or a priveledge. I’ve always believed it to be a right, as it benefits both society and the individual. The idea that education should be available to all is at the core of The Khan Academy, an open for all online school where curious minds from around the world can access information and lessons on everything under the sun. Khan Academy, founded by Salman Khan, the recipient of the 2009 Microsoft Tech Award in Education, is a non-profit organization with the modest goal of supplying education to ‘anyone, anywhere’. Khan, an MBA gradute from Harvard, started the online ‘school’ by creating simple math lessons on youtube for his cousin who lived abroad. Before he knew it, thousands of people were accessing his online tutorials.

Education plays a big role in the overall issue of wellbeing. It has an impact on almost every level and facet of our lives. If we start late in our schooling and formal education, it has a ripple effect that can last years. Income level disparity between the educated and non-educated has been clearly documented in recent years, showing a correlation between an individual’s level of schooling and pay. If students fall behind early on, they may spend many years trying to catch up. A lack of adequate education programs can also adversely affect communities, as poor educational offerings aid in keeping areas economically depressed.  I was lucky to have parents who both worked in education; yet, not all families have matriarchs and patriarchs who value education. In some countries the schools are inadequate at best, non-existent at worst. 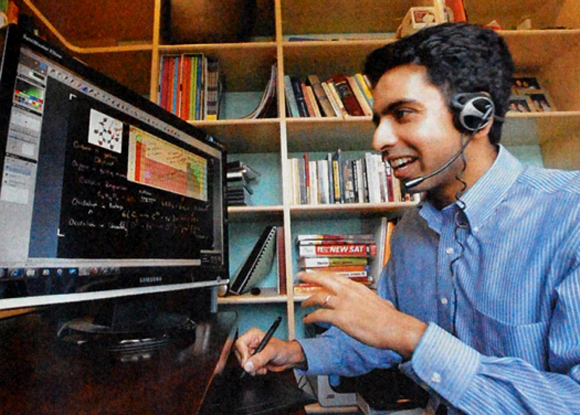 The Khan Academy is a powerful example of the use of design because Khan has successfully developed an organization with a strong mission that requires limited resources and funds. By using the free technology provided by youtube, Khan has distributed education lessons to many corners of the globe, a feat that would have cost thousands of dollars ten years ago. Lessons are also not made with fancy software, but basic freeware that come with any PC. For example, he used Microsoft Paint to illustrate his cousin’s first lesson. Khan stumbled upon the power of his idea by chance, and has used his constraints to his advantage in growing the awareness and popularity of the Khan Academy. It is also a sign of the changing times: one man can single handedly reach thousands through the use of open access internet applications.

The lessons themselves are also incredibly well done. Short and succinct, each video tackles a different concept including Chemistry, Biology, Linear Algebra, Economics, Calculus, English, History and many other traditional subject areas. Along with the traditional education lessons for children, Khan has also begun to branch out into explaining complex concepts for adults as well. He has lessons on the Stock Market, Health Care Costs and many other topics that are difficult to understand without formal education.

Khan Academy, despite its success, is still in the early phases of development and is not self-sustaining yet. Khan estimates that he should be able to live completely off revenue created by the school within a year. Hopefully, the Khan academy will continue on to reward its founder Salman Khan, and to increase the wellbeing of the thousands who learn the value of education through its use.