The High Line Reclaiming Urban Assets: A Call to Action

Case Study on The High Line

The High Line transforms the concept of urban wilderness from one of abandonment to one of environmental, social and economic impact. Although the High Line has received ample press to date, we felt it fitting to salute the project in anticipation of its grand opening during the Summer of 2009. In looking closely at strategic design in New York City, we could not help but acknowledge the High Line as an outstanding example of recognizing a hidden asset in order to revive an urban landscape. 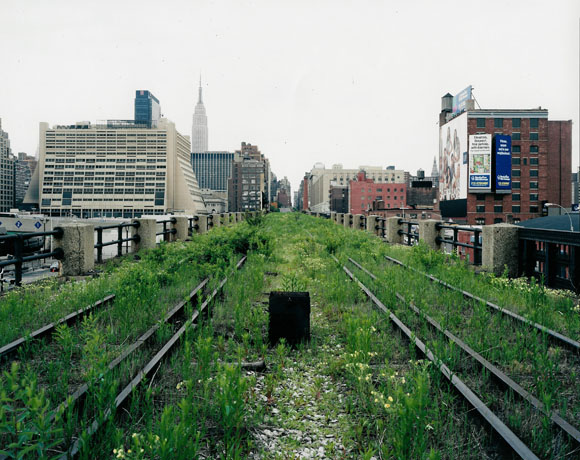 Photographs taken by Joe Sternfeld inspired the founders
of Friends of the High Line to launch the reclamation project.

Rendering of the first section of the High Line;
starting at Gansevoort and stretching north of 14th Street.

In the summer of 1999, Joshua David and Robert Hammond united with an innovative vision to transform the decaying railroad tracks, which had been abandoned twenty years earlier, into a community destination and landmark. David and Hammond established Friends of the High Line, a community-based group that spearheaded the design competition, fund raising and collaboration necessary to make their vision a reality. They actively opposed the demolition of the elevated railroad tracks, a measure that had been signed into action by outgoing Mayor Rudy Giuliani in 2002.

The project began with a unique definition of “park” inspired by a competition that gathered the ideas of novices and professionals alike. The Commissioner of the New York City Department of Parks and Recreation has described it as, “A park unlike any other, the High Line will be lifted 29 feet above the street, linking 22 blocks, connecting three neighborhoods, even passing through the interiors of buildings.”1 The park stretches more than a mile up Manhattan’s West Side from the Meatpacking District through the Hudson Yards and Hell’s Kitchen neighborhoods.

David and Hammond later reflected, “In their 2004 competition entry, Field Operations and Diller Sconfidio + Renfro showed us a proposal that retained the sense of wilderness and mystery of the original High Line landscape. It celebrated all that was great about the High Line’s past while making the High Line accessible and giving it a future.”1

Building with Nature
The design of the High Line is a graceful convergence of nature and industry, an exquisite paradox that makes the space so unique. A unique, modular planking system has enabled a dynamic installation of alternating planks and plant life, as evident in the illustration below. As the principal of Field Operations explained, “This intermixing of plants with paving creates a rambling, textural effect of immersion, strolling ‘within’ and ‘amongst’ rather than feeling distanced from.” 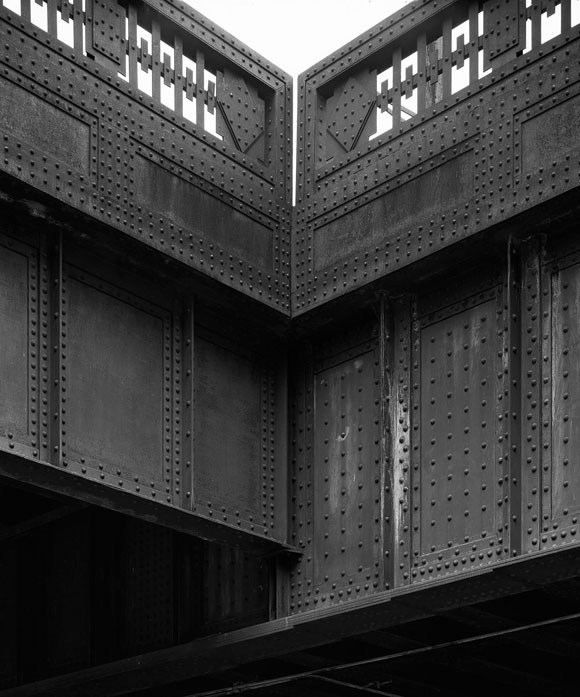 An example of historical preservation through the refurbishing of art deco railings found along the original, elevated railroad structure. [Joe Sternfeld © 2000.]

Further, the design of the High Line honors the structure’s history with the preservation and restoration of the art deco railings and the preservation of the historic railroad tracks themselves. As a further testament to sustainable design practices, it is this very re-use of an existing structure, which illustrates conscious resource management. Additionally, the preserved intricacies of the High Line, such as railroad ties, steel beams and railings, support the wonderment of the space, whispering stories of the past to future generations.

Designing Buy-In
“This project has always been about images.”1 It began with the photographs Joel Sternfeld took between 2000 and 2001. The images depicted the High Line in its naturally evolved state of vegetation cohabitating with industrial structure. His photos inspired community members like David and Hammond to quite literally “see” potential in the structure and question the plans for demolition.

Next came the careful translation of creative vision into realistic renderings that inspired support from the necessary government bodies as well as donor support to fund the large undertaking. “As part of its strategy, the coalition to save the High Line held a series of open meetings where they used a wide variety of photos, illustrations and diagrams to present the audience, the media and public officials with a vision of how the park could be revitalized and developed.”2 Through various forms of visual media Field Operations and Diller Sconfidio + Renfro enabled their audience to virtually “experience” the High Line long before construction began. Friends of the High Line went further using a blog and videos to champion their cause.

As New York Mayor Bloomberg expressed, “It is also a testament to how much we can accomplish through public-private partnerships, which combine the best talents and resources of government, the business community, and nonprofit organizations.”1 As New York City continues to create a cauldron of sustainable design initiatives, it is the strategic formation of public and private partnerships that will ensure the economic vitality of the projects.

Growing Value
The High Line offers the New York community a wealth of environmental, social and economic value. It brings wildlife and plant life to an otherwise industrial area mostly covered in cement and asphalt. The wilderness brings more than much needed public recreational space; it also serves as a cooling agent to offset heat reflected from seemingly endless blocks of concrete and glass. At a time when the climate change crisis demands action from all sectors, the environmental benefits of adding green space in urban areas are gaining more attention. 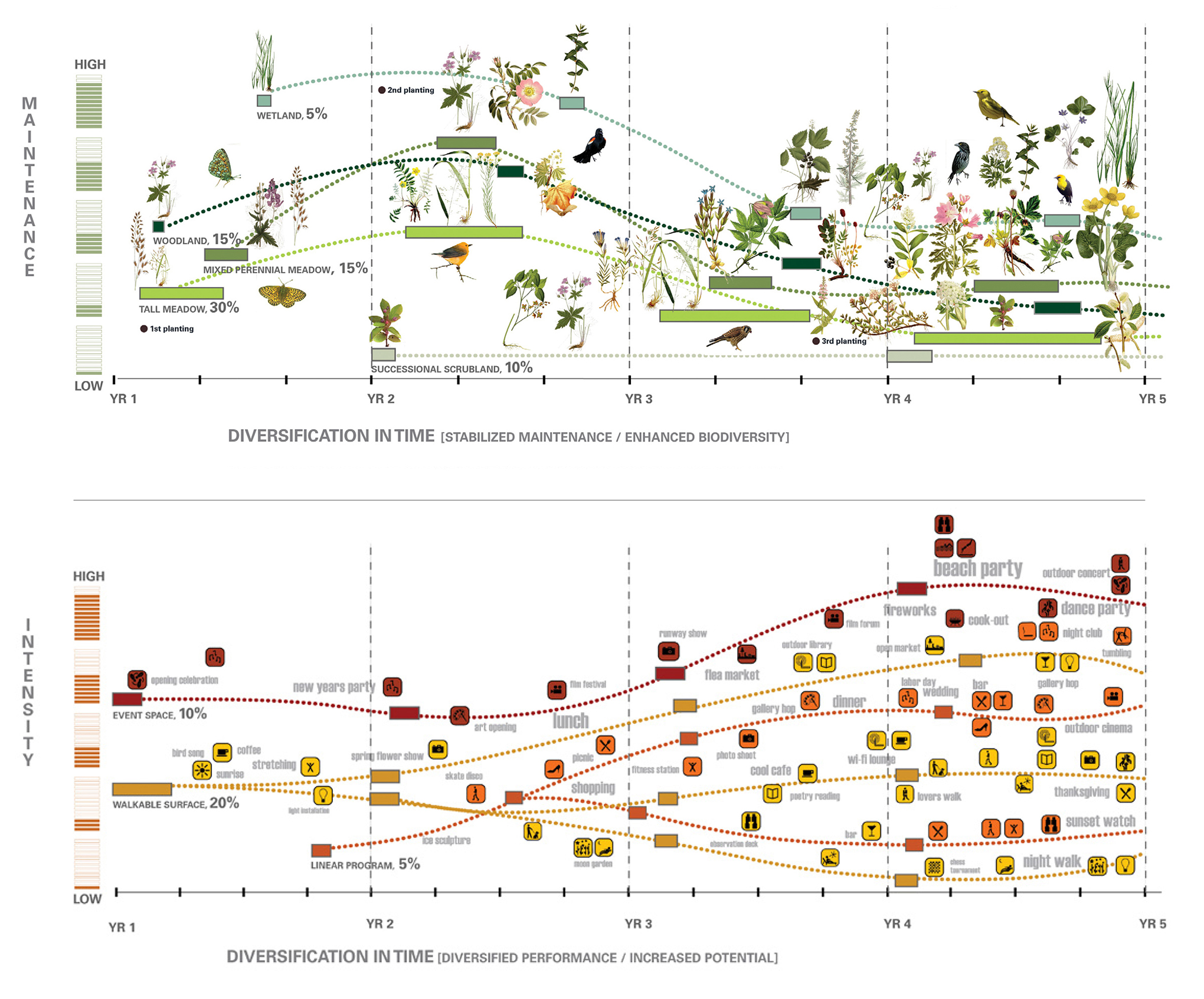 Intricate information graphics representing the possible evolution of natural life on the High Line (top) and community use of the space (bottom). Both graphics: James Corner Field Operations and Diller Scofidio + Renfro. Courtesy of the City of New York.

Culturally, the park is an oasis for recreation and interaction between community members. As James Corner, Principal of Field Operations, explains, “The strategy is to slow things down, to promote a sense of duration and of being in another place, where time seems less pressing. Long stairways, meandering pathways and hidden niches with seating encourage taking one’s time.”1 Similarly, architect, Richaro Scofidio describes, “Access points are durational experiences designed to prolong the transition from the frenetic pace of the city streets to the slow, otherworldly landscape of the High Line.”1 As the neighborhood arteries surrounding the High Line have transitioned away from industrial uses, local residents and workers are deserving of this calming, community space.

This unique offering of a natural oasis in an urban environment will likely make New York City more attractive in the eyes of home buyers, corporations and tourists. As evidenced in the surrounding developments by some of the most notable architects in the industry, the High Line has already fueled much local real estate attention. Beyond satisfying an acute environmental and social need, the project provides significant economic incentives for civil involvement. Motivations come in the form of tax revenues from newly developed property, increased property value surrounding the elevated park and increased tourist traffic. As Mayor Michael Bloomberg touts, “In years to come, it is destined to become one of our city’s most treasured and iconic public spaces.”

Because the High Line is a truly unique undertaking in the U.S., it serves as a beacon, a call to investigate our urban environments that have been abandoned. It is imperative that a call to action include uncovering and deploying assets through creative thinking, particularly in urban redevelopment. Through strategic design these spaces can bring a windfall of benefits. As America is faced with “reinventing” herself, perhaps maintaining a sense of wilderness as a part of progress is a small step in the right direction. 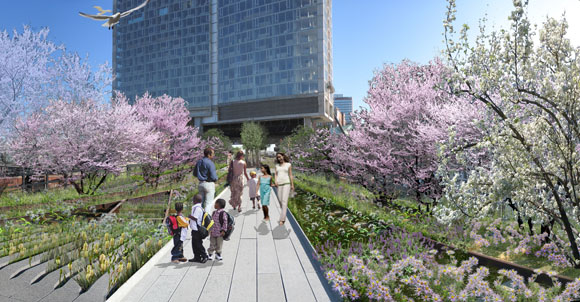 Rendering of the sundeck, which features a wading pool. Located between 14th and 15th streets. 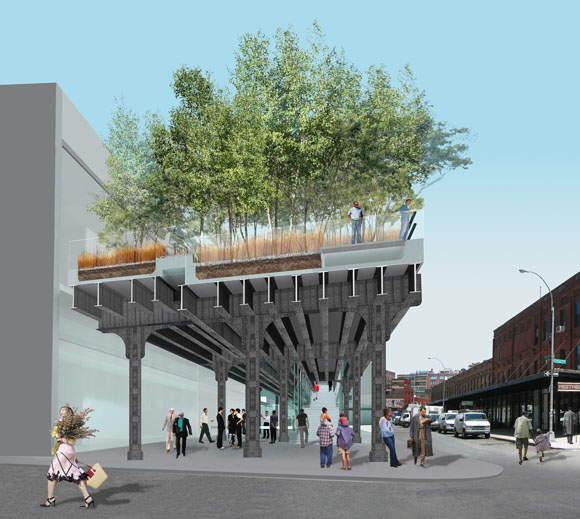 The Southern-most entrance to the High Line at Gansevoort Street. 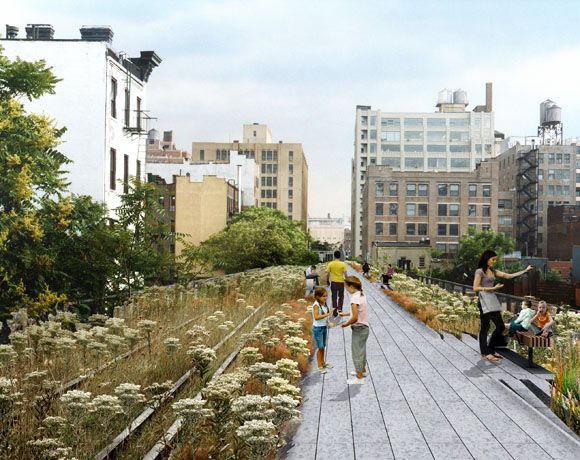 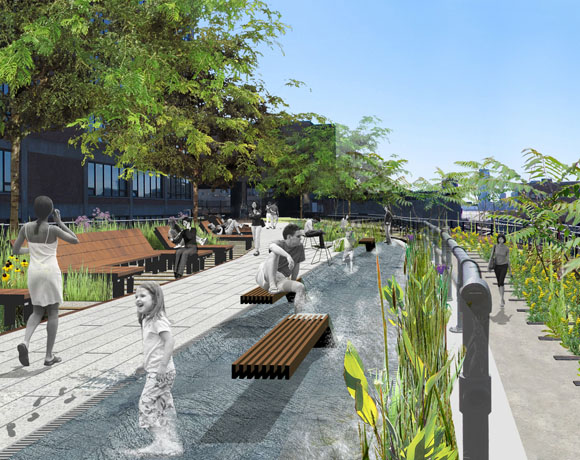 Erin Weber is a student in the Pratt Design Management program. She spends her weekdays directing the marketing initiatives and designing ads for a luxury furniture company based in Manhattan. Erin received her undergraduate degree in Communication Design and Psychology from Carnegie Mellon University.

See how another iconic NYC landmark, the Empire State Building, is being upgraded to sustainable status.