Last night at the UJA Federation of New York 200 business professionals and designers met to discuss how sustainable innovation and business work together. It was the 8th and final event in the Columbia Business School’s series ‘Making Green from Green’. Pratt Design Management Director Mary McBride led a panel discussion featuring Pratt Design Management Professor Eric Wilmot (Director of Innovation Group at Wolf Olins), Ken Drucker (who is the design director of HOK, a global architecture firm) and Andrew Dent of Material Connexion, a company that specializes in providing sustainable materials for companies that are seeking new solutions to the manufacturing process. McBride led the discussion by asking the panel a series of questions on the intersection of design, business and sustainability:

After brief introductions each panelist was then able to speak about how the business landscape is changing and how design will be used to achieve sustainability.

The night yielded several insights, the first of which was Andrew Dent’s re-telling of an experience he had while working with Puma, the shoe company. Material Connexion had been hired to re-think the sustainability aspect of the iconic red box Puma uses in their packaging. After fifteen months of work, Material Connexion had devised a new box, using egg carton material and no dye. Everything about it looked sustainable and eco-friendly. However, the new solution had to be made by machine, whereas the old box was made by hand. This single change in the supply chain and manufacturing process made the carbon footprint of the box even larger than the original box, despite its eco-friendly look. He related this to the notion that sustainability is not ‘this looks green and that looks eco friendly’, but stressed that businesses need to attach numbers to their sustainability measures, and consider the entire value chain. It’s not simply the materials going into the product, it’s how it’s packaged, shipped, and ultimately what happens to it when the consumer is finished with it. Their final design addresses all of these elements successfully. 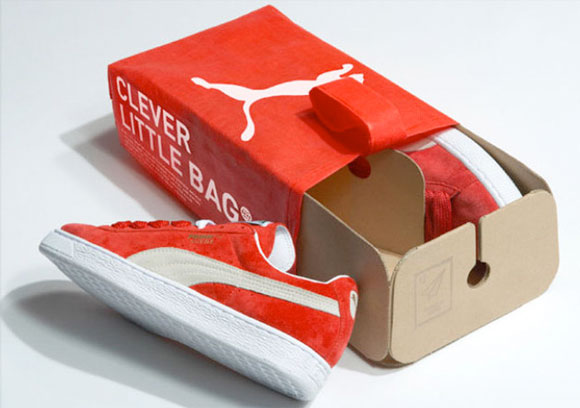 Another interesting revelation was the idea of working with companies who are currently considered unethical. Eric Wilmot expounded upon the idea that Wolf Ollins is open to working with any company that is interested in changing their ways for the better. He stated that if a company is willing to truly change its views and practices on its sustainability practices then they are worth helping and consulting for. Sometimes these companies are the best to work with, because they are embracing the change that needs to happen and will be open to new, big ideas. Surprisingly, a company that could change sustainability practices is Wal-Mart. Typically the subject of criticism for unfair labor practices; the company has a new policy that will promote sustainable products through life-cycle analysis and will not sell items that falsely promote green practices.