The Design Community Reacts to Haiti

In 2010 there have already been three natural disasters of great magnitude. In Port-au–Prince, Haiti an earthquake nearly leveled the nation’s capital. Several weeks later Santiago, Chile was struck with a quake of an even greater magnitude. And more recently in Japan, a 7.3 level earthquake hit Okinawa. The fallout and reaction from Haiti has been the loudest as celebrities, organizations and nations have all come to the country’s aid. The events in Port-au-Prince have also generated a lot of buzz in the design community with much discussion on how design can help alleviate the problems of the country. What follows is a sample of the design community’s reactions, ranging from infrastructure design solutions to visual communication that increases awareness. 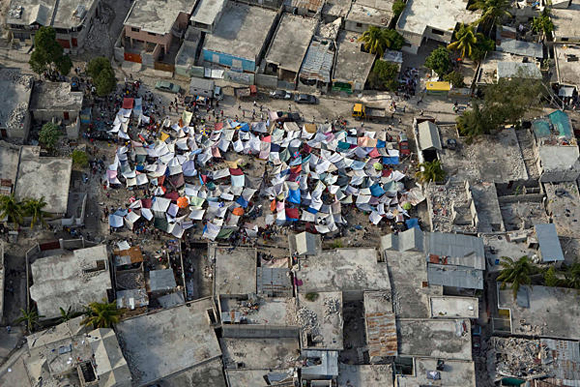 A birds eye view of the disaster relief in Port-au-Prince, Haiti

First, is KCRW’s Design and Architecture with Frances Anderton. The weekly program, able to be downloaded as a podcast, addressed the Haiti issue right off the bat in this show from January 19th. Anderton speaks with several experts on architectural design, most notable among them the founder of Architecture for Humanity, Cameron Sinclair. Anderton discusses with her guests not only how design can help rebuild Port-au-Prince but also how design can be used as a preventative measure that anticipates these kinds of events.

Likewise, the National Design Museum recently held a panel discussion on design’s ability to help Haiti in recovery. Design in the Face of Disaster was an hour long discussion at the Cooper-Hewitt in New York City on the need for design to be more involved in these larger issues as opposed to focusing on design for fortune 500 companies and financial profit. Featuring footage from Haiti, they discussed possible solutions moving forward. The panel had guests from a wide array of organizations including the Design Continuum in Boston and UNICEF.

The International Council of Societies of Industrial Design has also called for design help. Their initiative encourages designers to come to the forefront of the problem-solving process by stating, “Uniting Designers in Disaster is an open forum for designers of all disciplines to come together with ideas and initiatives to help address the current crisis in Haiti.” They have launched a facebook page to generate grassroots support and it has upwards of 3,000 fans to date. 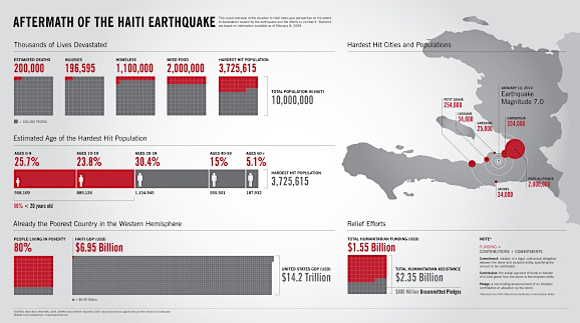 The Winner of GOOD and Design for Haiti’s info-graphic contest.

On the more traditional design front was a contest launched by designforhaiti.com. In a hope to create and foster a better understanding of the events in Haiti, Design for Haiti, in partnership with GOOD magazine, launched an info-graphic contest to communicate the events that occurred in Port-au-Prince and the ensuing global reaction. Inspired by the massive success of the role design played in the Obama Presidential campaign, it exemplifies the power design can have in educating and rallying people around important global and humanitarian issues. The response was hundreds of submissions of info-graphic and poster designs. The winner was announced and posted on GOOD last month.

This is just a sample of the design community’s response to the events in Haiti. What they all have in common is that they view design as a tool for serious, global problem solving. They also reflect the ability design has to involve people otherwise not interested in humanitarian issues. But more so, they communicate the ability for design to be part of the initial planning of communities and urban infrastructures. Hopefully, we will see much more design involvement in the recovery effort in Port-au-Prince but also in the development efforts of other countries which are subject to similar natural disasters.