A Hands-On Lab for Reverse Innovation?

David A. Smith, the founder of the Affordable Housing Institute (AHI) tells us that “markets alone will never satisfactorily house a nation’s poorest citizens…whether people buy or rent, housing is typically affordable to only half of the population.” The result? Smith points to a “spontaneous community of self-built or informally built homes — the shanty towns, settlements, and ever-expanding slums that sprout like mushrooms on the outskirts of cities in the developing world.”

We started discussing the issue, examining the subject through the lens of reverse innovation.
Here are five questions Christian and I asked ourselves:

Livable Housing. Our first thought was that self-built houses are usually built from materials that are available — cardboard, plastic, mud or clay, metal scraps and whatever else is nearby. Built on dirt floors, these structures are prone to collapse and catching fire. Solution: replace these unsafe structures with a mass-produced, standard, affordable, and sustainable solution. We want to create the $300-House-for-the-Poor.

Look and Feel. To designers, our sketch of this house might be a bit of a joke, but it’s useful nonetheless to illustrate the concept, to get started. We wanted the house to be an ecosystem of products and solutions designed around the real needs of the inhabitants. Of course it would have to be made out of sustainable, green materials, but more crucially, it would have to be durable enough to withstand torrential rains, earthquakes, and the stress of children playing. The house might be a single room structure with drop-down partitions for privacy. Furniture — sleeping hammocks and fold-down chairs would be built in. The roof would boast an inexpensive solar panel and battery to light the house and charge the mobile phone and tablet computer. An inexpensive water filter would be built in as well.

In effect, the house is really a one-room shed designed around the family ecosystem, a lego-like aggregation of useful products that “bring good things to life” for the poor. 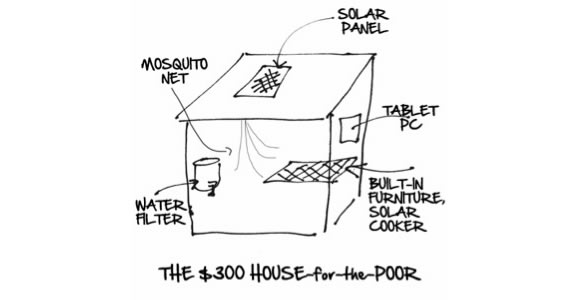 World-Class Design. Our next question was: “Who will do this?” We decided that it would be have to be a collaboration between global design and engineering companies and non-profits with experience solving problems for the poor. The usual suspects ran through our minds — IDEO, GE, TATA, Siemens, Habitat-for Humanity, Partners In Health, the Solar Electric Light Fund, the Clinton Initiative, the Gates Foundation, Grameen. Governments may play an important part is setting the stage for these types of cross-country innovation projects.

The Reverse Innovation Payoff. Participating companies will reap two rewards. First, they will be able to serve the unserved, the 2.5 billion who make up the bottom of the pyramid. Second, they create new competencies which can help transform lives in rich countries by creating breakthrough innovations to solve several problems (scaled housing for hurricane victims, refugees, and even the armed forces).

A House of One’s Own: Affordability. To move beyond charity, the poor must become owners of their homes, responsible for their care and upkeep. The model of social business introduced by Muhammad Yunus resonates strongly with us. Micro-finance must surely play a role in making the $300 House-for-the-Poor a viable and self-sustaining solution.

Of course, the idea we present here is an experiment. Nevertheless, we feel it deserves to be explored. From the one-room shacks in Haiti’s Central Plateau to the jhuggi clusters in and around Delhi, to the favelas in São Paulo, the problem of housing-for-the-poor is truly global.

We ask CEOs, Governments, NGOs, Foundations: Are there any takers?