The coffee chain strives to standardize its operations.

Last week, as I was standing in line at Starbucks, I witnessed the chaos as baristas shuffled behind the counter. I observed a few static elements of their operations: one barista was in charge of warming pastries, another was fixed on the register, one shuffled an inventory of fruit cups to the front counter, and about two others made drinks. Yet the process was not seamless, and after waiting a long eight minutes, my caramel latte was piping hot, but without caramel.

If you’ve ever visited multiple Starbucks locations and realized that your drink was made inconsistently, you are not alone. A recent WSJ article reported that Starbuck’s customers have complained that the quality and taste of coffee beverages vary from store to store. As a result, the organization is mandating that barista’s slow down and focus on no more than two drinks at a time. This shift in production is likely to cause longer lines and impact the consumer experience as they order coffee or dine inside, which is a real concern to baristas. 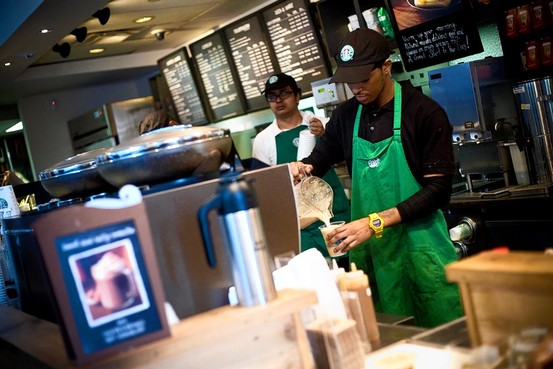 The company has evolved its operation procedures over the past few years, developing a “lean team” to standardize its behind-the-counter processes similar to the way auto manufacturers produce cars in a plant. The team identified that each store operated differently; even so much as storing beans in different locations. This one shift caused a variation in the time it took baristas to access beans for a beverage.

As Starbuck’s moves to standardize its operations, I think they would benefit from implementing a mechanical based operation, similar to what McDonalds’ uses. This operational strategy relies more on mechanics such as timed ovens, cookers and blenders, rather than people, to perform critical steps. Using strategic design, they should really take another look at how baristas operate, and identify which steps are repetitive for the most popular beverages. (The beverages that require additional, unique steps should be omitted from the menu.) With that information, the team should assess the procedures that would benefit from a mechanized process. Then maybe caramel latte’s could be served in six minutes, piping hot and with caramel at every location.