Executive Summary
Memories have static definitions that belong to the past; once done, they are complete.

The Spatial Agreements project is a design exercise that experiments with the meaning of objects out of their context. It intends to break down the associative reaction that links memory and object recognition. It recreates a new reality to celebrate the possibilities of the forgotten. The project plays with different models of cities and spaces, where design is utilized as a tool to involve citizens in the process of building their cities. In its initial iteration, Spatial Agreements brought together communities and youths in the city of Denver with the goal to encourage the reimagination of the city and to explore its cultural heritage and legacy. 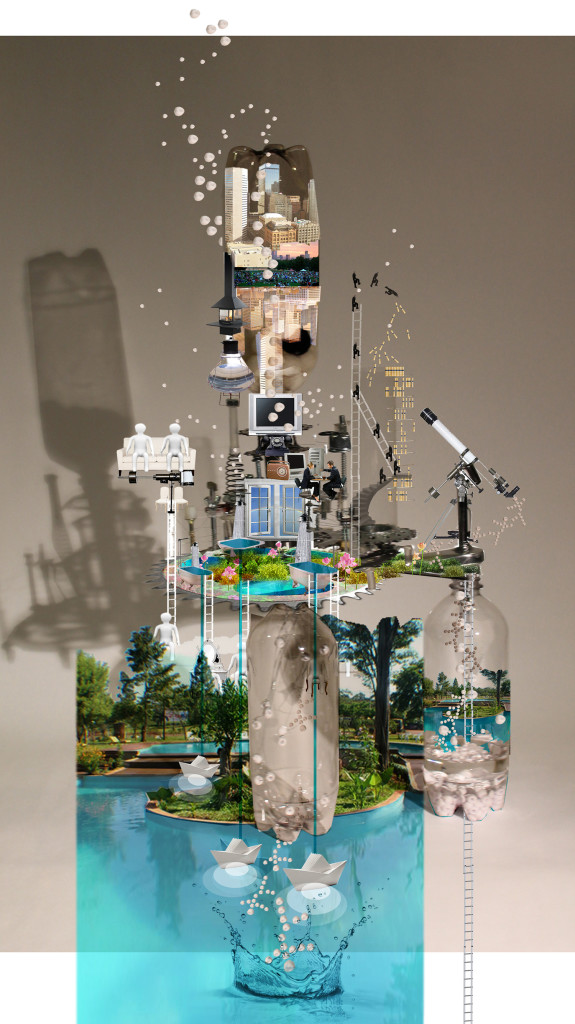 Developed from a 90-day artist residency grant in Denver, Colorado, Spatial Agreements was a partnership between the nonprofit organization PlatteForum, and the Colorado I Have a Dream Foundation.

PlatteForum is an organization that teams underserved youth from around the metropolitan area with contemporary master artists in intensive, structured, and long-term creative learning environments. The Colorado I Have a Dream Foundation is an award-winning nonprofit organization helping some of Denver’s most disadvantaged youth achieve academic success.

Both organizations believe in “strengthening individual practice through collaboration,” supporting the synergy of disconnectedness and the power of collective negotiation.

The collaboration was developed in a separate but interconnected process. On one hand, we intended to engage the Platteforum community in the process of experimenting with new scenarios that explore the meaning of our cultural legacy. On the other hand, the production of the workshop, A City for Us, with underserved high school students that aimed to empower their sight and awareness about the significant impact they can have on the design of their city. It aims to develop young peoples’ awareness of the importance of their role as citizens. A City For US defends the importance of every citizen on this process, training the capacities of the youth to develop critical minds, able to justify and decide the possibilities of the cities they inhabit.

For Spatial Agreements and the A City for US workshop, the concept of “Our Collective Cultural Heritage” was a driving theme. During five hours a week over the course of five weeks, Spatial Agreements worked with a team of underserved urban youth (K-12) to conduct the A City for Us workshop. After the participants chose the buildings they considered representative of Denver, they used the workshop to open up the limits of architecture into public spaces.

The Process Informs the Design
The process, rather than the outcome, was the focus of Spatial Agreements and the workshop. It was important that participants learn to explore the morphological conditions that define objects, and the possibilities that occur when detached from their cultural reference. The intended consequence of this decontextualization is that the act of design becomes a state of debate that attempts to break down the static associative reaction that links the memory and the objects. Through the project, associative memories stop being untouchable boundaries, but instead, they become a source of accumulated references ready to be manipulated as active agents for innovation.

Three components of the process actively challenged the often-linear structure of a traditional design process: inventory production, project assemblage and final product. Spatial Agreements implored workshop participants to focus on local materials and objects. The community held a critical role in the process of gathering materials throughout the project and design process.

In the project, the inventory consisted of recycled materials from nonprofit organizations, thrift and antiques stores, donations from Denver’s citizens eager to discard home items and appliances, leftover material from Platteforum, as well as additional donations from local citizens. The material list was never fixed, never closed. It was the result of a temporal and spatial encounter that didn’t stop until the end of the project.
Project Assemblage

The final inventory only stopped growing near the end of the Spatial Agreements residency when the meaning of ownership reversed the nature of this phase. As the project participants acquired more everyday materials and objects, they investigated the potential of the materials. One informed the other as the designs grew and morphed. In example, if the umbrella had not been acquired at the same time as the iron, the mosquito scene would have never been created. The process became the design itself.

The Final Product
A final exhibition concluded the project; however, the outcomes went beyond the physical manifestation of the project and workshop. The exhibition sparked an open debate about the redefinition created through the materials. People talked on a micro and macro level, from the new buildings that the students created for the city of Denver, to how amazing it would be if the model could be made a reality. They even spoke of how the spider made out of a toaster, could simultaneously be a helicopter. The final product was a physical manifestation designed to move beyond reaction. It was the reflection that arose from the spectator with the consequence that she could re-think her surroundings.

The Spatial Agreements project represents the consequence of a negotiation between the morphology of the object and the new spatial definition associated with it.

In this context, the belief of “form follows function” is flipped to “function follows form” An encounter with the “in between,” the numerous layers that define the object creates experimental structures with forms that suggest possible scenarios that continue to inform the meaning of the objects and their potential use. The morphology of these objects is what dictates their use, which should be one of the principles of sustainability. Read the nature of things, and make the best of it. 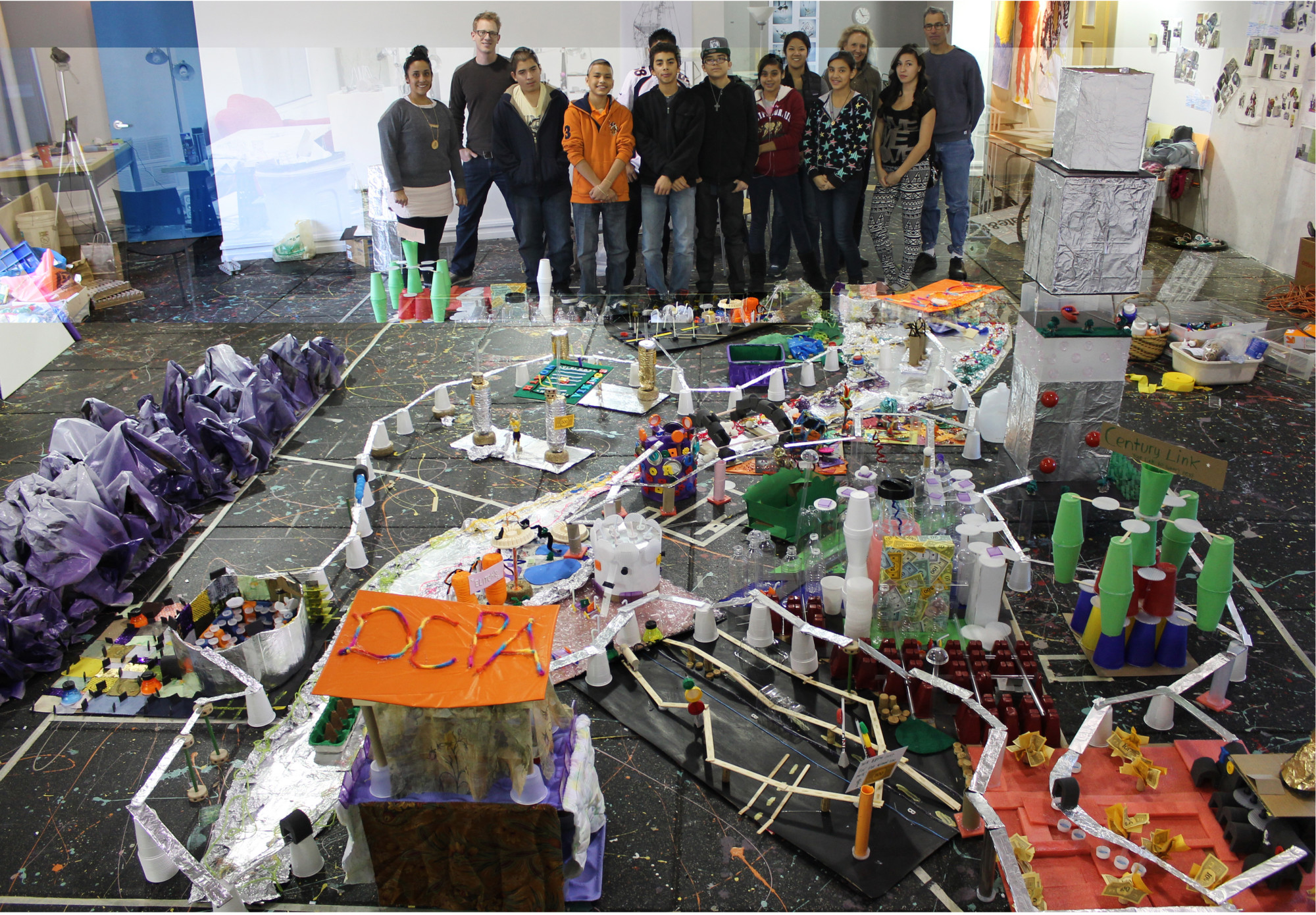 Here are some of the thoughts from young participants of the A City for Us workshop:
Jasmine: I recreated the Cash Register building. First, we made a plaza at the bottom making the rest of the building appear as if it is floating above the ground. At the center, we made an open glass atrium that you can see into. These changes could make for a more public space, open to everyone, because it gives the public a chance to see more things. Denver does not seem to be a place fit for kids, and I feel that this new place could give kids and teens somewhere to go to get away from their lives. The public would probably be shocked and surprised and also happy that they have these spaces. I think this building could be a reality, but it would take someone to stand up for it and campaign for these changes. I feel like if we had more public spaces we would have less crime and violence, and it would empower youth to do something more constructive versus sitting at home.

Angel: I designed a park near PlatteForum and I also helped reconstruct roads. In both places, I added more colors, more creativity, and made the streets safer, based on observations of the local area. My designed park included added sculptures, and I gave the streets more lamps, to help the drivers and people see better. It shows that Denver can be safe, but at the same time, goofy and creative. If my creations were real, I think the public would be shocked, because usually in a city you do not see so much creativity everywhere. I think these upgrades can occur in real life if we all work together and advocate these needs

Juan: For this project, I made a few things including the State Capitol, Civic Center Park, painting the mountains, and a football field for the North Vikings. I had the most fun coming up with the new football field and painting the mountains. One of the changes I made was to the capitol, by placing the words “Y.O.L.O.” on the front to remind everyone to live well. I also made money trees for Civic Center Park, because the government has a lot of money, but they do not spend it on the right things. With the money trees, everyone can come get money and spend it on good things. The football field represents the future because I designed it to float in mid-air, and that is not something you see right now. Instead of being a normal city, I think Denver could be more futuristic. We have the power to change lives and encourage others to come up with new ideas for making society better. Most of the changes I made could be possible except for the money trees, because everyone knows that money does not grow on trees.

The Value of Decontextualized Design Thinking
The Spatial Agreements project framed a scenario where design was no longer the result of a controlled idea, but the consequence of the relationship established with a city and its community. It upheld a few key considerations throughout the projects’ process. First, substitute project with ‘experiment’, then tap into the spontaneous consequences of a collaboration. Next, challenge the loyalty to any fixed physical manifestation, value the unexpected encounters derived from an open process, and trade mission for negotiation. Ultimately, it challenged participants to think differently and creatively about the everyday places, spaces, and objects that define their cities and form the foundations of culture.

We must start thinking of spatial occupation in other ways. Thinking of space as content and not just as containers. Spatial Agreements was not only a physical project but also a thought process. This approach is essential for the process of building creative cities and thus, creative citizens. It reclaims the importance of the analysis of its existence, and its definition to discover the qualities that might recreate the future.

The city is the consequence of a collective memory inherited. We do not live in an era where cities need to be re-thought from scratch, rather, we are in a time where things already exist that can be redefined, to the benefit of our cultural heritage of our cities and communities. On many occasions we miss qualities of existing space because of the need to accomplish a concrete mission far apart from its context. It requires a critical vision detached from the past, and an analytical attachment to the present. This temporal contraposition is what makes possible a creative definition of the future.

STRATEGIES IN ACTION:
Rethink sustainability; it relates to changing one’s mindset to step out of the box.

Collaborate as there is no need to start from scratch when what already exists can be redefined.

Reimagine design possibilities by stepping back and changing the scenario.

Remember context goes hand in hand with a collective memory. 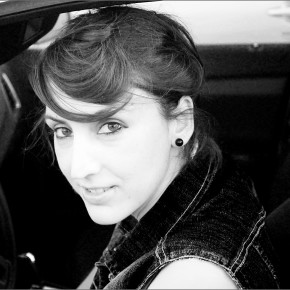 Ana Peñalba holds a Masters degree in Architecture from the Polytechnic University of Madrid, completing her education with a Post-Master Degree in Environment Studies and Bioclimatic Architecture in 2007. In 2005 she has co-founded the Architecture Collective Leon11 and is currently working as an Urban Design Researcher at the organization Terreform under the direction of Michael Sorkin.

Ana explores the limits where the mission of Architecture serves to, understanding her practice as the result of overlapped disciplines that uses controversial actions to challenge quotidian attitudes, to restore Architecture to the service of thinking and to implement new visions of the society and cities where we live. She is regularly invited as a guest critic at Anne Spitzer School of Architecture (CUNY), Graduate School of Art Planning and Preservation (GSAPP) Columbia School, Pratt School of Architecture, Fashion Institute of Technology (FIT) and The New York School of Interior Design.