Navdanya International is redesigning the agriculture model in India by training farmers with practices that naturally increase crop yield while decreasing dependence on expensive oil and scarce water supplies. The organization is fortifying the local economy by developing a sustainable framework that maximizes income while taking into account the wellness of farmers and their families and respect for the land on which their livelihoods depend.

Our world economy is driven by the use of oil. It finds its way into every corner of production and consumption around the world and the increasing need for more oil to fuel expanding markets and growing populations is a major challenge facing the 21st Century. Unfortunately, the oil crisis, as most people understand it today, is being confined mainly to the issue of energy. In actuality, it pervades much deeper into the fundamentals of the globalized industrial economy — how food is produced, how our towns and homes are designed and how goods are distributed. The oil crisis is inextricably linked to the climate crisis, yet this understanding is rarely referred to in climate change negotiations and discussions.

The climate debate is being narrowed down to problems and solutions from the perspective of industrialized, urbanized societies. From the perspective of the “rich,” the problem that needs solving is how to control the world’s oil supply while simultaneously finding alternatives to oil before the resource runs out and before climate change disrupts the current world order. The issue of over-extraction and over-consumption of energy is being avoided, as is the issue of injustice to the poor and other life forms whose homes and habitats, lives and futures, are being sacrificed to provide the energy and resources to run a globalized consumerist economy. 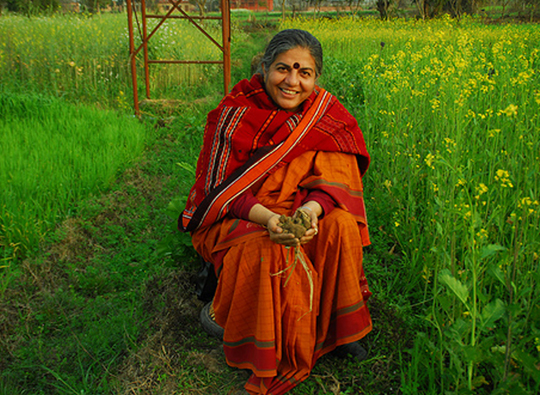 Dr. Shiva is an active champion for biodiverse farming in India.

This is a reductionist analysis, leading to reductionist solutions. Energy, a multidimensional category, is reduced to industrial consumptive energy alone — energy as electricity or fuel. Solutions to climate chaos require a paradigm shift, from a reductionist to a holistic worldview, from a mechanistic, Industrial model to an ecological one, and to an understanding that our collective creative energies must work together, between the rich and the poor, to become conservers of the Earth’s finite resources and co-creators of wealth with nature.

To do so, we must re-evaluate the way we design global industrialized systems. Agriculture, one of the world’s largest industries, is a leading contributor to climate change and is also one of the most vulnerable to climate chaos. The dominant paradigm of agriculture today is based on the “Green Revolution,” which was introduced in the 1950s and postures that soil fertility and crop productivity could be enhanced in factories through the manufacture of fertilizers and pesticides. The model diminishes biodiversity and organic production to promote monocultures, using intensive inputs of chemicals, water and fossil fuels. 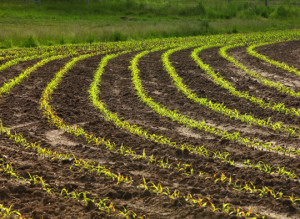 In the mid 1960’s, Norman Borlaug, the Nobel Prize-winning “father of the Green Revolution” traveled to India to attend a meeting in New Delhi and told Indian politicians and diplomats that they should encourage Indian farmers to use fertilizers in order to increase their production rates.1 Today, as a result of fertilizer-based farming methods, yields in India are declining, the soil is depleted of nutrients and the water is polluted with nitrates and pesticides.

Chemical monocultures of the “Green Revolution” also use ten times more water than biodiverse ecological farming systems. In the 1970s, the World Bank gave massive loans to India to promote groundwater mining. It forced states like Maharashtra to stop growing water prudent crops, such as millets (which needs 300 mm of water), and shift to water-guzzling crops like sugarcane (which needs 2500 mm of water). In a region with 600 mm of rainfall and 10% ground water recharge, this is a recipe for disaster.2 Since the introduction of the “Green Revolution” model of chemical farming, under the direction of the World Bank and with pressure from the United States, India has overexploited its ground water, creating a water famine and intensifying the effects of weaker monsoons and subsequent drought. 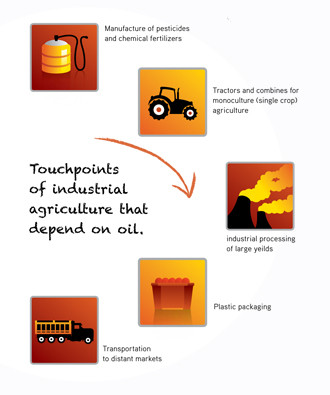 Touchpoints of industrial agriculture that depend on oil.

Not only has water-wasteful chemical agriculture mined ground water, it has also devastated soil fertility. Chemical fertilizers destroy the living processes of the soil and make soils more vulnerable to drought. Monoculture crops using high-yield seed varieties also draw out nutrients from the soil at a rapid rate and create micronutrient deficiencies in the soil. The use of fertilizers and pesticides also results in soil toxicity by introducing excess quantities of trace elements, such as fluorine and selenium, into the ecosystem. The build up of these trace elements pose a threat not only to the soil, but also to ground water supplies and animal and human health. Finally, chemical fertilizers also produce nitrogen oxide, a greenhouse gas, which is three hundred times more potent than carbon dioxide.

The high environmental cost of corporate agriculture is also having an adverse impact on farmers’ livelihoods. The increasing cost of production, which includes hybrid and genetically engineered seeds, stronger pesticides, irrigation, and falling market prices combined with the decline in farm credit is putting a great burden on farmers and pushing them to desperation. Since 1997, more than 250,000 farmers from Andhra Pradesh, Karnataka, Maharashtra and Punjab have taken their lives. The Research Foundation for Science, Technology, and Ecology (RFSTE) has been monitoring the impact of trade liberalization policies on Indian farmers and Indian agriculture since the New Economic Policy (1991) and World Trade Organization rules of the agreement on agriculture (1995) came into force.

As these multiple crises deepen, the very same corporations that are the driving force behind the “Green Revolution” and genetic engineering are trying to transform the crisis into new marketing opportunities. Recently, these corporations began “inventing” and patenting climate resilient traits of seeds, the identical traits in seeds that farmers have evolved over centuries. India has already been named a potential market for the first drought-resistant crop, maize, which is expected to be commercialized by 2010. Furthermore, these corporations are pushing the use of stronger and broader spectrum herbicides on the new “drought-resistant crops”, which continues to destroy soil biodiversity, intensifies our oil addiction, and entrenches farmers further into debt. 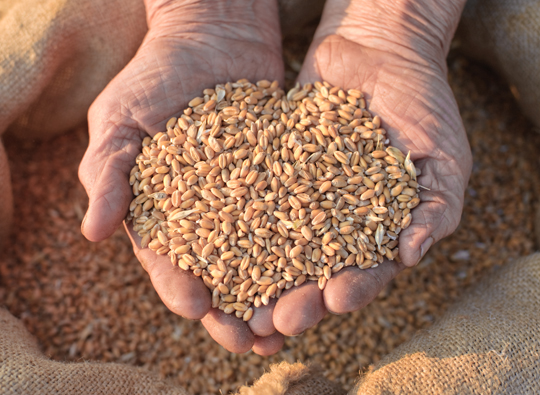 Dr. Shiva’s work with Navdanya includes the conservation and distribution of native seed varieties, which have been adapted over centuries to naturally meet ecological demands.

What these corporations fail to realize is that India has hundreds of thousands of drought resistant crops already, some of which are conserved in and distributed by Navdanya’s 54 community seed banks across India. Navdanya means “nine seeds,” or “the new gift,” and our organization brings the gift of ancient seeds, evolved and bred over millennia, to impoverished farmers around India as an alternative to industrial monocultures.

Navdanya believes that designing a new system of agriculture based on biodiversity and protection of the Earth’s soil is the first pillar of transitioning to climate-safe economies.

Navdanya’s efforts have resulted in the conservation of more than 3,000 rice varieties, 75 varieties of wheat, hundreds of millets, oilseeds, and other multi-purpose plant species from all over the country, including indigenous varieties that have been adapted over centuries to meet different ecological demands. Navdanya believes biodiversity based organic farming systems are a solution for the climate crisis in India and around the world.

Biodiverse ecological farms address the climate crisis by reducing our addiction to oil. Eliminating petrochemical-based pesticides and fertilizers, managing land-use responsibly, protecting forests from expansion of industrial agriculture and minimizing transport of food and crops around the world can reduce the industry’s carbon footprint. Such changes can result in a two to seven-fold energy savings and a five to 15% global fuel emissions offset through the sequestration of carbon in organically managed soil. Biodiverse ecological farms also address the climate crisis by increasing soil fertility. The millions of organisms found in soil are the source of its fertility. Healthy soils are the most effective carbon sinks, which help reduce emissions of greenhouse gases such as nitrogen oxide, and absorb carbon dioxide in plants as well as in the soil. They also help adapt to climate change and drought by increasing soil organic matter, which in turn increases the moisture-holding capacity of soil. Navdanya’s work has indicated that organic farming increases carbon absorption by up to 55% and water-holding capacity by 10%. 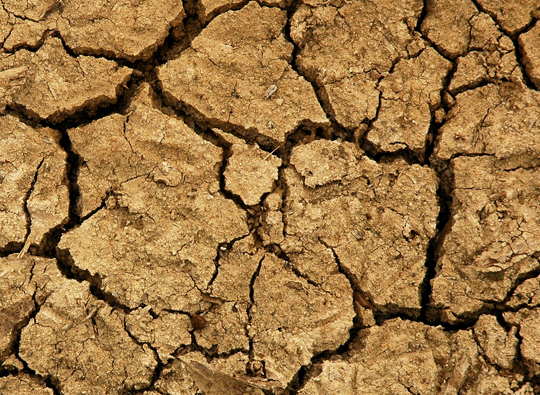 Navdanya’s work has indicated that organic farming increases carbon absorption by up to 55% and water holding capacity by 10%.

Biodiverse organic systems also address the water crisis. First, production based on water-prudent crops like millets reduces the demand for water. Second, organic systems use ten times less water than chemical systems, reducing irrigation demand and helping to conserve water in agriculture. Navdanya’s seed bank has proven successful even in drought years. While cultivation of rice has gone down from 25.673 million hectares to 19.13 million hectares, the area under water-prudent drought resistant nutritious crops has gone up from 15.325 to 15.956 million hectares. The biotechnology industry is clearly a laggard in breeding for drought resistance compared to centuries of breeding by India’s farmers.

Over the past 20 years, Navdanya has championed the convergence between conserving biodiverse agricultural practices, reducing climate change impact and alleviating poverty. To date, Navdanya has trained more than 400,000 men and women farmers, students, government officials, representatives of national, as well as international, NGOs and voluntary organizations on biodiversity conservation and organic farming. The successes are palpable across India. In Sikkim, for instance, a monoculture farm of corn yielded 4,950 Rupees per acre while a biodiverse farm of corn, radish and other varieties yielded 11,700 Rupees per acre, nearly two and a half times the profit. Across India, conservation of native seeds and biodiverse farming have yielded incomes two to three times higher than monoculture farming, and eight to nine times higher than industrial systems using genetically-engineered seeds.

Navdanya believes that designing a new system of agriculture based on biodiversity and protection of the Earth’s soil is the first pillar of transitioning to climatesafe economies. “We have shown that we can grow more crops and provide higher incomes to farmers without destroying the environment. We can lower the costs of production while increasing output. We can wean ourselves off oil and support growing populations for generations to follow in a new climate-safe world.” 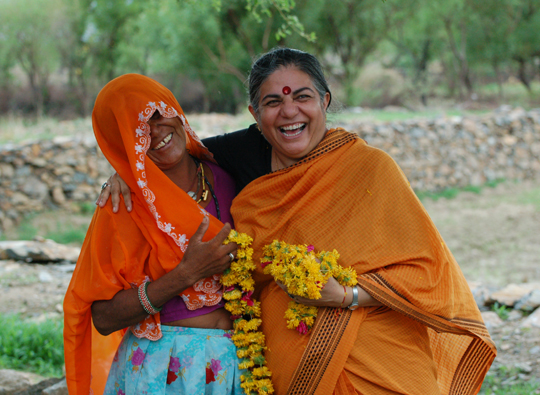