Referred to by Fast Company as the “Doctor of the Future,” Dr. Jay Parkinson has been revered as an innovator, and written up in publications like Newsweek, Esquire and The Boston Globe. After finishing a residency in pediatrics and one in preventive medicine at Johns Hopkins, with just $1,500 in the bank and over a quarter-million dollars of student loans, Jay Parkinson set out to design a better medical practice. Since then his solutions have taken different forms and seen varied degreed of success. Now Parkinson is back with new venture called Sherpaa, a New York City service that connects patients and doctors 24/7 via cell phone and web.

Currently, Sherpaa is aimed primarily at businesses. Here’s how it works: Sherpaa’s team works with its insurance experts to find a suitable high-deductible plan. Sherpaa then provides members with access to a 24/7 team of doctors online or over the phone. This can prevent unnecessary trips to the emergency room and/or time-consuming trips to primary care physicians only to be referred to a specialist. The final piece of the puzzle is that the company gives employees a debit card equal to the amount of the plan’s deducible. The debit card is to be used for medical expenses, and any funds remaining on the card at the end of the year are returned to the company.

The first company to work with Sherpaa was Tumblr, and since then they have continued to see success. Sherpaa has now signed other tech-savvy startup companies such as Percolate, Skillshare, CZ Studio, Greatist, Hard Candy Shell, and Timehop. They also recently raised $1.85 million in venture funding from First Round Capital, O’Reilly Alpha Tech Ventures and Collaborative Fund. 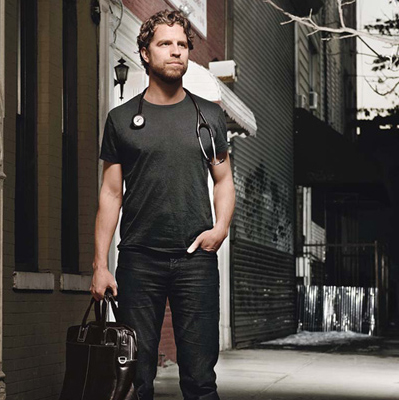 “…you always have to start with the innovators and the ones that have the means to adopt early.”

Critics have pointed out that the list of young, startup clients highlights a flaw in the Sherpaa model. While it works for companies with relatively young, healthy employees it may not be applicable for firms with a more diverse employee base. In an article published by the The New York Observer, Parkinson explains, “…you always have to start with the innovators and the ones that have the means to adopt early.”

One high profile fan of Sherpaa, the conservative commentator Reihan Salam, also points out the importance of early adopters to innovation. In an article about Sherpaa and Parkinson in the National Review Online Salam says:

“Some people should and will attack our dysfunctional health system frontally. But of course there is a place for some firms to attack the pathologies of the health system from the ‘easiest’ angles. Solving the problem of getting mobile phones into the hands of everyone in the world, starting with the poorest countries, would have been very difficult indeed had there not been an elite niche market of people with lots of disposable income willing to experiment with new approaches. One is reminded of William Gibson’s famous remark that ‘The future is already here – it’s just not evenly distributed.’”

One example of cost savings with Sherppa.

Innovation is desperately needed in healthcare. Our delivery system is stuck in the 20th century despite the fact that we have new tools and new means of communication in every other aspect of our lives.  Sherpaa may not be the answer for everyone right now, but at least it’s a step; an action to remove the strangle hold of our current, broken system.