A proposal for redesigning education within an urban fabric

We live in a global economy, unquestionably. The common metaphor, pioneered by Thomas Friedman is that “the world is flat.” Technology and a less expensive knowledge-based workforce in countries like India, Brazil and Vietnam have leveled the economic gap between the developing world and western countries. An alternate view, held by urban theorist Richard Florida, seems more compelling to me. He argues that the world is not flat but “spiky.” The “spikes” are the world’s cities, and these urban centers are the critical components that will lead to a better balance between our limited planetary resources and the rapidly expanding human population.

More than half of the human race lives in a city. This figure will rise to 70% by the year 2050. Florida cites the statistic [PDF] that together New York, Los Angeles, Chicago and Boston have a bigger economy than all of China. These urban centers are supported by a diversity of interconnected systems and infrastructure that enhance the human condition (i.e. employment, culture, housing, education, transportation, public safety, health care, energy and technology). Given the population density and critical mass of economic, social and intellectual capital in cities, they naturally become innovation hubs. Furthermore, hubs like London, Paris, New York, Tokyo, Chicago, San Francisco, Hong Kong, Singapore and Los Angeles are dynamically interconnected with each other. 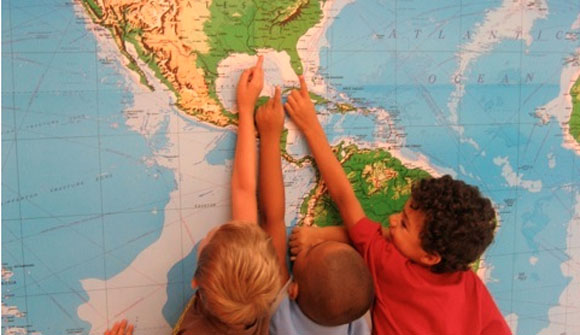 But there is always a weak link, and in this instance, the weakest link in many of the leading urban economies is preK-12 education. Education is critical to a thriving urban center, so why are urban education systems in distress? Better yet: What can we do to change this fate? What does an urban preK-12 physical environment look like in the third millennium? What is the new pedagogy? Here are a few humble suggestions for redesigning education within an urban fabric—the outcomes of which should be more intelligent city centers and a more sustainable planet.

Develop Learning Centers Closer to Home
McDonald’s appears to have a very simple business model–build a McDonald’s for every 25,000 people. Let’s apply this simple concept to building schools by developing a formula that allots a certain number of smaller schools for each city neighborhood with a maximum 20-minute walk between the school and any home in the designated area. If we build schools closer to home, our neighborhoods will be safer, we will cut transportation costs drastically and students and parents will not waste time commuting. We will be building schools that also act as community centers that the neighborhood can access during after-school hours and during the summer. School buses are eliminated, thereby reducing the overall carbon footprint of the urban center. And walking to school provides a means for addressing childhood obesity.

Create Connections Between Schools and the Business Community
Urban centers are the concentration of brain power in most disciplines and industries, which promotes a natural and organic state of collaboration. Schools need to take advantage of this density of innovation and seek out experts and companies to teach and mentor young learners. Imagine a mathematician working for Wall Street teaching calculus to teenagers–there’s the short answer to why learning calculus is necessary. We should take advantage of the purpose-driven millennial generation that is willing to volunteer to teach young children through urban programs like Teach for America, City Year and the countless others that are out there.

Let’s connect the dots by connecting the systems so urban centers become exponentially smarter and more efficient. And, more importantly, we’ll be instilling the ideal of multidisciplinary collaboration in our children–tomorrow’s leaders.

Read the full article on fastcodesign