Environmentalist David de Rothschild’s Voyage to Save Our Oceans 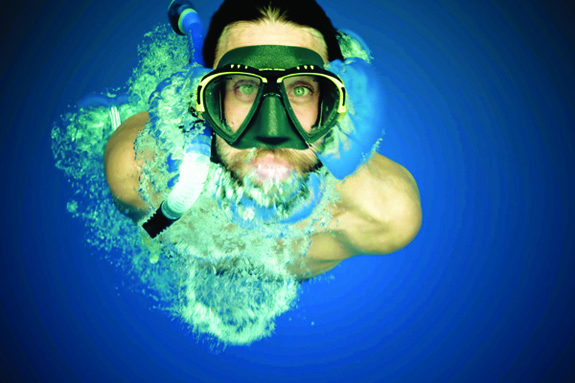 Executive Summary
In March 2010, Adventure Ecology founder and environmentalist David de Rothschild and his intrepid crew set sail on an ocean adventure of unrivaled proportions. The journey took them over 11,000 nautical miles across the Pacific in a boat made almost entirely from plastic bottles. The Plastiki has been on a mission to beat waste, not only as a product or outcome, but also as a system for how strategic design can re-imagine definitions of the “good life”. Created almost entirely from reclaimed plastic water and soda bottles and a uniquely recyclable and relatively unexplored material, Seretex, this distinctive, one-of-a-kind construction not only set the stage for a historic expedition, but allowed Adventure Ecology and its crew to deliver a spectacular global “Message in a Bottle.”

CATALYST: Can you give us the background on the Plastiki?
The Plastiki began her adventure in 2006 after taking inspiration from a report issued by United Nations Environment Programme (UNEP), called ‘Ecosystems and Biodiversity in Deep Waters and High Seas’ and Thor Heyerdahl’s epic 1947 expedition, The Kon-Tiki. True to their values,

a compelling and pioneering expedition was needed that would not only inform, but would also captivate, activate and educate the world that waste is fundamentally a product of inefficient design. With more efficient design and a smarter understanding of how we use materials, principally plastic, waste can be transformed into a valuable resource, in turn helping to lessen our plastic fingerprints on the world’s oceans.

To undertake the Plastiki expedition David and his team were not only influenced by the principles of ‘cradle-to-cradle’ design and biomimicry but also brought together a multi-faceted team from the fields of sustainable design, boat building, architecture and material science in order to foster a collection of new ideas and cutting-edge technologies that allow the Plastiki to be a truly unique, one-of-a-kind expedition vessel. The Plastiki as a system, not necessarily as an outcome or object, can be a prototype for other “cradle-to-cradle” innovations. In that sense, it is a challenge and adventure for those who innovate in other ways.

CATALYST: What was your motivation?
PLASTIKI: It is estimated that almost all of the marine pollution in the world is comprised of plastic materials. The average proportion varies between 60% and 80% of total marine pollution. In many regions in the northern and southern Pacific Ocean Gyres, or waste accumulation zones, plastic materials constitute as much as 90 to 95% of the total amount of marine debris. Scientists estimate that every year at least one million seabirds and 100,000 marine mammals and sea turtles die when they entangle themselves in plastic pollution or ingest it. According to Project Aware, 15 billion pounds of plastic are produced in the U.S. every year, and only one billion pounds are recycled.

CATALYST: Can you elaborate on the philosophy of the expedition?
PLASTIKI: We started by recognizing that waste is fundamentally a design flaw, meaning that it does not appear in nature. Essentially, we wanted to re-think waste as a resource. At present, plastic is the one material that is specifically designed for one-time use, even though it lasts forever. Approximately 17 million barrels of crude oil are used to make the 29 billion plastic bottles Americans consume each year. Five out of every six plastic water bottles are not recycled, and a plastic bottle can take up to 450 years to degrade. This is no way to be energy efficient!

We decided to approach this problem by thinking about cyclical ‘cradle-to-cradle’ processes rather than using linear thinking to design our world. To gain a better understanding of the lifecycles and materials used in our everyday lives, we made the commitment to be curious and open. We were prepared to let go of assumptions in order to undertake a new ‘Planet 2.0’ way of thinking and acting.

Acknowledging that we don’t have all the answers and that nobody is as smart as everybody, we placed a lot of value on being collaborative and curious in order to engage multiple perspectives, skills, opinions and organizations. Our philosophy is about constantly learning, unlearning and re-learning.

Re-integrating back into the web of life will take recognizing and reducing our human fingerprints on the natural world. We felt it was imperative to move on from just articulating the problems. We wanted to inspire actions and design solutions. In the end, our voyage and philosophy is about encouraging the world to reduce, reuse, recycle and rethink the planet’s natural resources by delivering a spectacular global “Message in a Bottle”.

CATALYST: You mentioned captivating, activating and educating the world about the design flaw represented by waste. How did you engage your worldwide audience while at sea?
PLASTIKI: From our launch to our arrival, we undertook over one hundred interviews while at sea. We were able to generate a lot of interest, and were featured in over six hundred print publications and an equal number of broadcast and radio pieces. Over four thousand news web sites have featured us, and we have a pretty strong social media following as well, including about eight hundred tweets during the voyage while we were at sea.

CATALYST:The storytelling and adventurous aspect of the Plastiki book was one of the most compelling aspects. I was also intrigued by some of the vignettes about design innovation, such as bio glue, biomimicry. How does Plastiki evidence these design innovations?
PLASTIKI: The Plastiki is no ordinary vessel. It was created almost entirely from reclaimed plastic water and soda bottles. The reclaimed polyethylene terephthalate (PET) soda bottles are one of the core building components of the Plastiki. Around 12,000 reclaimed soda bottles were used to keep us afloat.

Seretex is a self-reinforced PET and a uniquely recyclable and relatively unexplored material. It has never been used to make anything like a boat before. It is a woven fabric made from PET fibers and is 100% recyclable. Free of contaminants, it can be melted down and reused to make just about anything, from objects such as car body panels to construction products. It is a natural fit to replace fibreglass in future ocean-going vessels and has almost limitless applications.

The Plastiki was primarily powered by wind-power. When extra precision was required, for example, when navigating coral reefs, the trailing turbine was also used for propulsion. The turbine is electrically powered; utilizing charge from solar panels, a wind turbine and bicycle-powered generators on board.

Part of the inspiration for our voyage was the knowledge that this one-of-a-kind vessel would not only set the stage for a historic expedition, but would allow Adventure Ecology and its crew to deliver a spectacular global “Message in a Bottle.”

“The first challenge was to find a way to turn a very weak material (plastic bottles) into a structure that would withstand the forces likely to be experienced on a voyage through the Pacific Ocean. We took our inspiration from a number of examples that included the way that eggs used to be packaged in Japan (tied together with reeds so that the eggs are held firmly in compression). However, the source that provided the greatest breakthrough was a pomegranate. When I was cutting one up, I realized that each individual segment had a degree of internal pressure, and that by packing them together in a geometrically compact way, filling the gaps with pith, and surrounding them all with a tough skin, the end result is a very resilient form… It was very satisfying to see the concepts of biomimicry being taken through the whole project, including the design of the cabin by Nathaniel Corum of Architecture for Humanity and the first use of a completely nontoxic type of glue as an alternative to the conventional resin-based compounds used in boat building.”

– Michael Pawlyn, From Pomegranates to Plastiki: How Biomimicry Helped to Build the Boat

Plastic pollution, while a massive, global environmental problem, is also a very personal one. The effects of global warming caused by colorless, odorless gases may not yet be widely felt; we all see and touch plastic every day of our lives. We can readily see our waste footprint grow, but all of us can do something immediate and measurable to reduce it.

STRATEGIES IN ACTION:
Recognize that waste is fundamentally a design flaw that does not appear in nature.
Rethink waste as a resource.
Understand the lifecycles and materials used in our everyday lives, and how behaviors can be changed to suit.
Reintegrate back into the web of life by reducing the human fingerprint on the natural world. 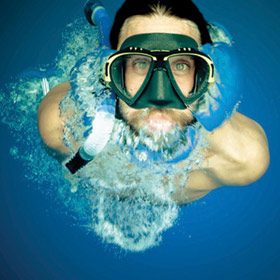 David de Rothschild Environmentalist; Founder of Adventure Ecology, MYOO David is an adventurer, environmentalist and the founder of MYOO, a meaningful marketing agency, online zine and adventure group, specializing in sustainability consultancy, material science and product design. It is MYOO’s goal to inspire dreams, fuel conversation, share innovations and activate change in order to give nature a voice. From March to July 2010, David and a crew of five undertook the latest expedition, ‘the Plastiki’, sailing across the Pacific Ocean on a catamaran made buoyant by 12,500 reclaimed plastic bottles to beat waste.