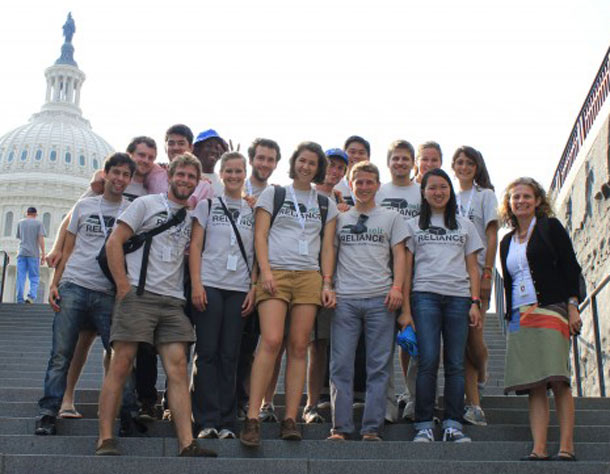 An abundance of enthusiasm helped the rain soaked start to this year’s 6th Annual Solar Decathlon. Only a few days before the September 23rd opening, 19 teams from around the world gathered on Washington DC’s soggy West Potomac Park and began to assemble their forward thinking, highly energy-efficient, solar-powered designed homes. Teams came from as far as New Zealand, China, and Belgium, and from across the US including southern California and a small town in Vermont to share their team’s enthusiasm, dedication, design and strategies.

The Solar Decathlon is a U.S. Department of Energy competition that offers  university teams a chance to design and build homes that run entirely on solar energy. Participants compete in ten contest areas. Each home is monitored for its performance in five areas relating to performance and livability: comfort (maintaining comfortable temperature and humidity in the home), hot water (producing a sufficient quantity for washing and bathing), appliances (such as keeping refrigerated items at the right temperature), home entertainment (running lights, computers, and other devices), and energy balance (energy consumption and generation must even out so that they use zero net energy over the course of a week). 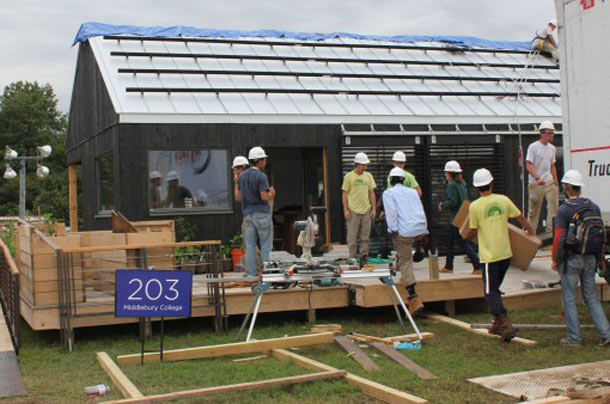 Additionally, the teams are rated by experts in five other areas: communications with the public, affordability, architecture, engineering, and market appeal of their homes. The overall winning team is the one that best blends affordability, consumer appeal, and design excellence with optimal energy production and maximum efficiency.

While preparing for its Fall 2011 issue, “Designing the Good Life,” Catalyst Strategic Design Review took an interest in this competition. A former Pratt architect graduate, had shared with us that she was leading a team of her students at Middlebury College (that small town in VT) in the competition. As Andrea Murray explained her experience it was clear, the story directly spoke to the publication’s theme.

Presently while the entire “Good Life” issue receives its finishing touches, The Solar Decathlon is well underway with Middlebury College’s team “Self-Reliant” holding on tight to a top five spot. Andrea sent an update before the weekend and final judging.

“Greetings from Washington, DC and the Solar Decathlon. Yesterday was a most remarkable day. We journeyed as a team to the Capitol where results from the Architecture Contest were announced. You may have already heard, but our liberal arts college – with no professional programs (graduate or undergraduate) in architecture or engineering – placed fourth. And, we were so close to third we could taste it. Our design was judged better than some of the most prestigious design schools in the nation, including SCI-Arch/CalTECH, Illinois Institute of Technology, and Parsons School of Design.

I smiled so much this afternoon, my cheeks hurt.

Not only do we have incredibly talented student designers on our team, but we have developed an integrated process where students from various disciplines have had the opportunity to contribute to the design of our house. As a result, our design is thoughtful, realistic, and clearly representative of the place from which it came. Our collective wisdom has out-smarted that of just about all the other teams.

I am exceedingly proud. This morning as I write this, we are in fourth place overall – amazing!

Jurors have called us, ‘the Black Stallion’ of the competition; visitors have said things like, ‘I could really live in this house;’ and people are even asking if they can purchase the house.”

Catalyst congratulates Andrea and her entire Self-Reliant team. They are winners by merely participating in this week’s competition. Now holding with a spot in the top five they are looking forward to what will be a photo finish no matter what happens.