Delicate origami boats float in a puddle across from the Reichstag in Berlin, Germany. An historical monument built to house the Imperial Diet.
Today, the meeting place of the Bundestag “Federal Assembly”, the lower house of Germany’s national legislature.
December 12, 2015 Photo by Marcello Zerletti retrieved from Flickr.com

The Migration Crisis in Germany

ince 2015, more than one million refugees have applied for asylum in Germany. For many people fleeing the crisis in Syria and other conflict zones in the Levant, Balkans and North Africa, Germany was long considered one of the best places to rebuild a thriving life in Europe.(1) Yet the scale and influx of refugees initially strained Germany’s state governments and local authorities beyond capacity. As the government struggled to keep up, an increasing number of private citizens began to serve in honorary capacities committed to the interests of refugees.(2)

Global media showed pictures of people welcoming refugees at train stations with cardboard signs reading “refugees welcome.” Public opinion showed a positive attitude towards immigration and was backed by the German Chancellor Angela Merkel’s slogan “We can do it” in the summer of 2015. However, not all the public has been as accepting of this new wave of refugees. Smaller political groups and parties on the right fringe of the political spectrum (e.g. Pegida) have lobbied against immigration policies and demonstrated against an inundation of foreigners.

Left: Refugee lodging Mainz (Flüchtlingsunterkunft Zwerchallee Mainz) flats in Mainz, November 2013 before being refurbished for scores of refugees and their family from many countries. Right: Meeting point refugee accommodation Mainz (Treffpunkt Flüchtlingsunterkunft Zwerchallee Mainz), June 2015. New tenants are welcomed guests for a get together, where everyone prepared delicacies from their home-countries. The green sign seems to have replaced the barbwire pointing to an inclusive and welcoming community. Photos by Andreas Coerper, retrieved on Flickr.com.

Refugee Welcome Centre in Hamburg situated in an empty school, an initiative of hundreds in the community meant to show how easily things can be solved. Hamburg, Germany, May 2014. Photos by Rasande Tyskar, retrieved on Flickr.com. As the crisis took center stage in the public realm, cultural institutions in Germany also became more involved with various thematic interpretations on migration and displacement. Initially, institutions from all cultural fields started with emergency assistance and supported refugees with actions outside of their core business.(5) The Deutsches Schauspielhaus Hamburg (“German Playhouse in Hamburg”) for instance offered emergency accommodation, distributed free food and clothes and helped with issues such as visas and work permits. The Deutsches Theater in Berlin (“German Theater in Berlin”) among others, gathered donations from their staff and audiences for humanitarian aid projects (auctioning costumes and props, charity concerts), and offered language courses.

Over time, many of these cultural institutions began to expand the scope of their work. They explored ways to build bridges to German citizens and started to consider refugees as potential visitors of their existing offerings and extending special invitations to them. For example, they offered free entrance to their rehearsals, regular programs and exhibitions, or curated special programs and guided tours through their institutions in multiple languages (e.g. collective `Refugees Welcome!`– offers of several museums in Berlin). Others offered tandem programs that encouraged the discovery and the exchange of common and different habits and cultures of locals and refugees. The Young Ensemble Stuttgart (“Junges Ensemble Stuttgart”) and the Staatsschauspiel Dresden (“State Playhouse Dresden”) for instance offered theater workshops to bring refugees and locals together.

As strategies evolved, museums began to devise more inclusive ways of activating exchange and connections. In many cases, refugees were invited to co-create experiences with diverse audiences. The Staatstheater Kassel (“Kassel State Theater”) designed art workshops to bring refugee and local families together. Some museums even brought refuges into the operational fold. The Neanderthal Museum in Mettman invited refugees to give lectures and guided tours on their personal experiences, whereas “Multaka – Meeting Point Museum” by the Berlin State Museum and the German Historical Museum in Berlin (“Staatliche Museen Berlin”, “Deutsches Historisches Museum Berlin”) qualified refugees to become professional guides, who now provide tours for other refugees in their native language.

A few institutions have even dealt with the refugee situation artistically, such as the Haus der Geschichte in Bonn (“House of the History of the Federal Republic of Germany”), which is co-working with refugees to develop special exhibitions on topics such as exodus and asylum. Others invited guest performances from the refugees´ countries of origin or integrated artists or objects originating from these countries in their programs, such as the Syrian Expat Philharmonic Orchestra playing at the Berlin Concert Hall (“Konzerthaus Berlin”) and the “DADA Africa” exhibition at the Berlinische Galerie (“Berlin Museum of Modern Art”). Singer Cornelia Lanz and the association “Zuflucht Kultur” developed arts projects together with refugees in so-called “refugee operas” that toured several cities in Germany under the name “Ensemble Refuge”.(6)

As the arts and cultural sector develops a more intentional orientation to the refugee crisis, some individual institutions are taking up clear political positions. A few, like the Schauspiel Köln (“Cologne Playhouse”), have organized public discussions, lectures and festivals on the issue of migration and flight, while others have been more confrontational. The Maxim Gorki Theater in Berlin initiated protests to draw public attention to the issue of the restrictive EU immigration policy.(7) Additional institutions, like the Semper Opera Dresden (“Semperoper Dresden”) were projecting slogans on their outer walls, hissing flags and banners or posting on their Facebook profiles calling for understanding and tolerance. And, in a subversive move, the Semper Opera and the Opera of the Staatstheater Mainz (“Mainz State Playhouse”) even countered demonstrating political groups and parties on the right fringe of the political spectrum by drowning out their shouting of slogans via singing classical choruses.

“Winterlights” is a festival at the Westfalenpark Dortmund with many colorful installations. It takes place annually, from
early December and ends the first week of January with huge fireworks. When I first saw this installation my thoughts were, so many REFUGEES are coming to our beautiful country, Germany) and many others all over Europe at this time and
“WE ALL SHOULD BE FRIENDS!”
Photo and caption/quote by K Edinger, December 2015, retrieved from Flickr.com. 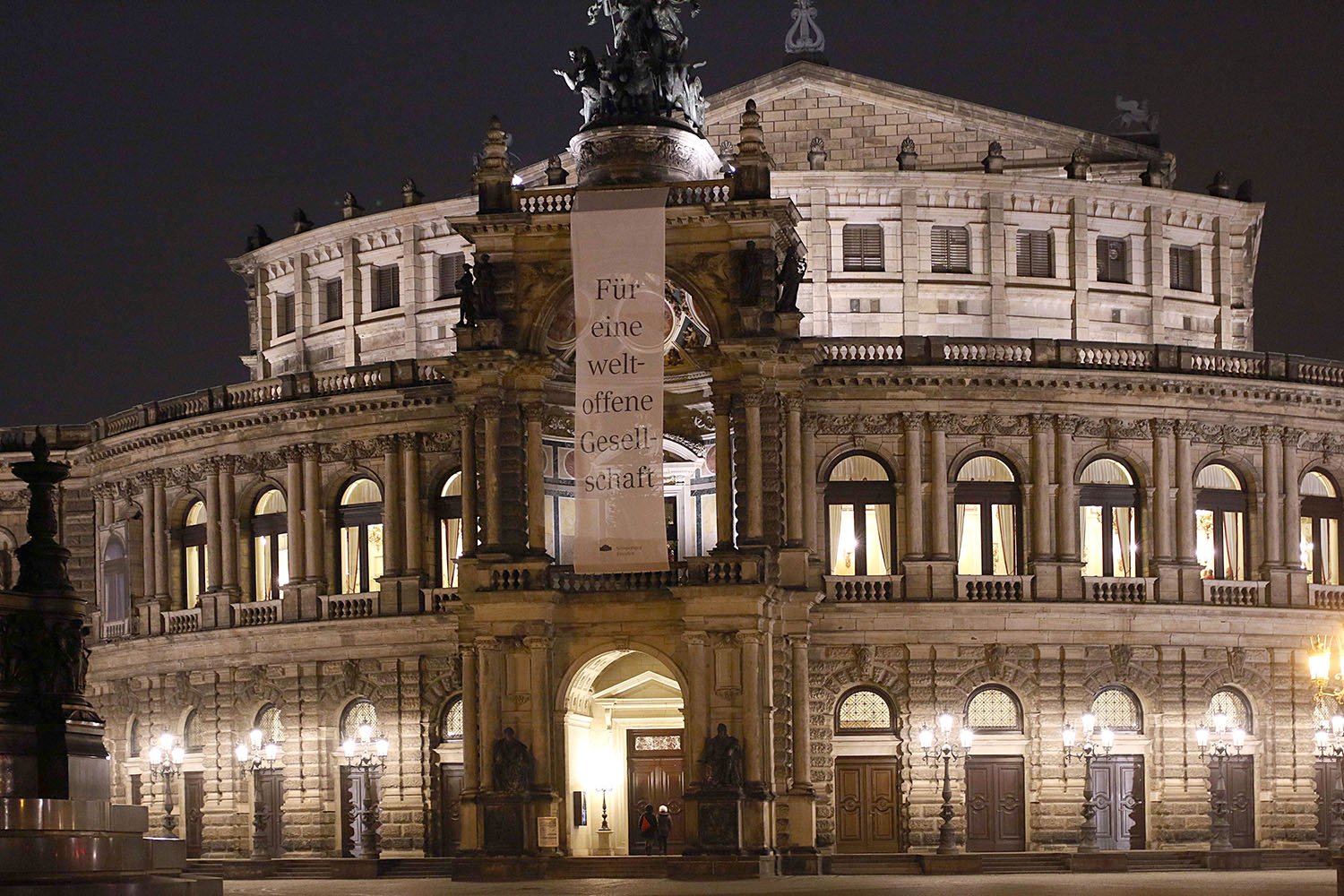 This rich fabric of cultural responses is in some ways unique to Germany. The strong momentum it gathered was a surprise even for operators in the cultural field. The clear majority of Germany’s cultural institutions, including museums, theaters and operas, are financed through public funds. Particularly in the field of high-culture, on average 80 percent of the funding originates through state means, and only 20 per cent through self-financing. This has historical roots. After the abuse of the arts for political means during World War II, the Constitution of the Federal Republic of Germany embodied a so-called “guarantee of artistic freedom.” This is interpreted as an active mandate for the state to foster artistic excellence and support democratic access to arts and culture initiatives, ensuring that the arts will never again be abused in service to one party’s political agenda. It has also led to the understanding that institutions should fulfill a cultural and educational role in society.(8) In essence, this system of public funding has historically driven the supply side rather than demand.

In the last 20 years however, cultural institutions have stepped up their efforts to reach out to new audiences in an attempt to counter increasingly insecure state funding programs, a result of social changes that have had a negative impact on audience development and on the relevance of institutions within society in Western cultures. The pluralization and individualization of lifestyles have lead to the loss of a “core audience” while the demographic change has led to a decrease in the population. The question if cultural institutions could (or should) play a role in society has already been the topic of theoretical discussion in Germany since the 1970s. However, only in the past decade, due to this increasing need by cultural institutions to find new audiences and create public value, have we been beginning to see signs of a real shift in the way the institutions view and position themselves. Cultural institutions are intensifying arts education programs, audience development strategies, and approaches to community building and community engagement activities.

Although Germany has become increasingly pluralized since its founding and, according to a study of the Organization for Economic Cooperation and Development (OECD), it currently is the most attractive immigration country among industrialized countries next to the United States,(9) it only officially accepted its status as an immigration country after the start of the new millennium.(10) Germany could no longer ignore the fact that ‘migrant’ groups could not be treated as a small minority – at least not in major German cities such as Frankfurt am Main, Munich, Stuttgart or Nuremberg, where up to 45 percent of the inhabitants have foreign roots.(11) For a long time, the focus in public and politics has been on immigrants and their task to integrate into German society. In recent years, the awareness has increased that integration needs to be mutual and that Germans also must play an active part in building and accepting a multicultural society. Significant discussions and consideration of the possible role the cultural sector could or should play are also quite new. In addressing this issue, Monika Grütters, the Federal Government Commissioner for Culture and the Media invented a special award in Spring 2016 for outstanding and innovative projects addressing cultural integration, therefore lending greater political weight to the topic.

Can the Arts and Culture Sector Transform Society?

Since the summer of 2016, the number of asylum seekers arriving in Germany has steadily decreased and the initial euphoria of the German population has given way to more realistic judgments.

Now that immediate action is no longer needed, our gratitude to those who have engaged themselves in this task and who have achieved great things needs to replaced with the critical examination of what can be done in the future. How can the activities that were hurriedly cobbled together be improved upon, how can cultural institutions be asked to stick with their activities, how sustainable will those offerings or projects with refugees be in the future? Are there other societal groups in Germany that deserve equal attention?

And most importantly, how will this current situation change the cultural sector in Germany in the long run? Ultimately, we are a critical inflection point where Germany’s attempts to remarket cultural offerings to a wider public over the past decade is being met head on by an opportunity for cultural institutions to play an active role in shaping a more inclusive society for all. Creating sustainable programming related to multicultural exchange and understanding are keys here for success. It will be certainly very exciting to follow the development. STRATEGIES IN ACTION:
>> Consider
ways to attract refugees as visitors.
>> Activate
methods of exchange and connection between refugees and the larger public.
>> Invite
refugees to co-create programming.
>> Use
the institution as an advocacy platform for cultural inclusion. Vera Allmanritter received her Master’s in Arts and Media Administration at the Free University of Berlin. Since 2015 she has been Scientific Fellow at the Department of Cultural Policy at the University of Hildesheim. Her doctoral thesis was published in the spring of 2017 (title: “Audience development in a migration society”).

(4) Arzheimer, Kai (2015): Every Monday, thousands of Germans rally against Muslims. Here are the 6 things you need to know about the ‘Pegida’ movement, The Washington Post November 4, 2015

(5) The selection made here does not imply any judgement on the quality or the special value of these examples.