Lessons for the Road

As CATALYST rounds out its first year in existence and I finish my transition out of the role of Executive Editor, it seems an appropriate time to reflect on the unexpected lessons this past year has brought…

STRATEGIC DESIGN CAN CHANGE THE WORLD.
It took 6 months, two issues and lots of discussions and reading for me to fully comprehend why designers should be talking about enabling land ownership in Central America, transforming abandoned infrastructure into park space and developing sustainability standards for agriculture. My intrinsic interest in its breadth of topics and noble efforts of its subject matter attracted me to become the first editor of CATALYST Strategic Design Review. However, it took time for me to effectively articulate the value design brings to the solution of complex challenges and why CATALYST should feature authors and subject matter outside the traditional scope of design publications. 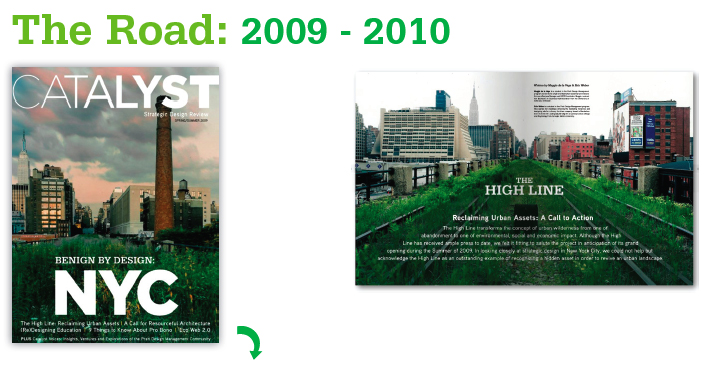 In the fall of 2008, when I had been attending the Pratt Design Management (DM) program for just two months, the director, Mary McBride, expressed her vision for the publication of a magazine which would represent the diverse, triple bottom line focus of the curriculum. I volunteered to lead our small team through the process of launching the publication while trusting that Mary’s “big, hairy, audacious goal” would come into focus during my process of discovery.

“The next generation of designers will need to be as comfortable in the boardroom as they are in the studio or the shop, and they will need to begin looking at every problem—from adult illiteracy to global warming—as a design problem.”

Looking back, I am thankful to have trusted Mary’s insight. The summer after Issue 1, Tim Brown’s words in his book Change by Design spoke to my newfound appreciation of Mary’s vision for CATALYST:

“The next generation of designers will need to be as comfortable in the boardroom as they are in the studio or the shop, and they will need to begin looking at every problem—from adult illiteracy to global warming—as a design problem.”– Tim Brown, CEO of IDEO

He goes on to say, “Our real goal, then, is not so much fulfilling manifest needs by creating a speedier or a more ergonomic keyboard; that’s the job of design .It is helping people to articulate the latent needs they may not even know they have, and this is the challenge of design thinkers.”

By the time Issue 2 was published, I had instituted the addition of “CATALYST Insights,” snippets of text, which bridge article content to the processes and practices used by strategic designers (or as Brown would call us, design thinkers).

Everyone has a story to tell.
I have always been a “people person,” but I was not prepared for the unexpected connections and doors CATALYST opened during the course of this past year.

Various talented  alumni and professors have advised on everything from the CATALYST name, to font choices, blog posts and editing. In fact, one of CATALYST’s primary editors was also the author of the HOW magazine article that initially attracted me to the Pratt DM program. Thanks to CATALYST, I was able to thank her in person for writing the article that redirected my entire professional future!

Another Pratt alum connected me with a talented photographer while I was in search of a professional to capture my wedding day. We quickly got to talking about his life outside wedding photography. The next thing I knew, he was connecting me with Agros International and sending me his beautiful photographs to enliven the spreads of the Cradle to Cradle issue.

And then sometimes contacts are unavailable and luck, timing and an enticing sales pitch must be on your side. While soliciting articles for issue two, I decided to throw a hail Mary and send an email to the publicist for Ray Anderson, the CEO of Interface Carpet, one of the “it” companies for sustainability. To my amazement, Mr. Anderson’s publicist replied, invited us to meet him and facilitated the collection of content, which was later featured in Life-Centered Design.

CATALYST opened my eyes to the number of interested and supportive people who are willing to become involved in a good cause.

The value of defining processes.
When we launched Issue 1, I wore many hats: author, editor, project manager, designer, typesetter, production specialist, marketer… (you get the idea). That omnipresent strategy would be even more challenging now that CATALYST has an expanded web presence, tripled its staff and set lofty goals for the future.

In order to create a sustainable organization that could continue to flourish after I graduated, the processes I had internalized for my own reference needed to be clearly defined in order to facilitate a transition to my predecessors. It was while establishing those standards and best practices that I became a true believer in the value of a leader’s exposure to every part of the process. Early in her experience, the incoming blog director asked how we determined what blog posts were appropriate for inclusion. Her question was a good one and something I had taken for granted because the three of us who launched the magazine had come to internalize its brand promise. It quickly became clear that there was value in defining that promise in the form of a mission, vision and questions to ask when considering the relevance of proposed content. Additionally, the process of defining CATALYST terms and blog categories further enhanced my personal understanding of the topics we were covering.

I found it helpful to forfeit my responsibilities in steps. For instance, a designer joined the team for issue two which meant that instead of adding content on the fly, I needed to consolidate everything and bundle it into a clear deliverable to be handed off. Writing captions, “strategy in actions”, CATALYST insights and compiling content for the entire publication took me nearly 40 hours. By Issue 3, I was able to explain the components and process to our editorial board and divide the work load between eight people. Consequently each editorial board member was able to dive further into the article content they were managing and CATALYST represented a wider spectrum of perspectives (not to mention that I got more sleep!).

As Roger Martin presents in his book The Design of Business, moving ideas through the “knowledge funnel” from abstract ideas (“mysteries”), to general rules of thumb (“heuristics”) and then defined processes (“algorithms”) enables organizational efficiency and growth.

For the Road…
As I head into the next stage of my career, I am grateful to take with me these life lessons from my time with CATALYST. I am extremely grateful for the opportunity to apply the Design Management curriculum to the leadership and implementation of this organization. My hope is that my predecessors gain as much inspiration and insight from the experience as I have!

Erin Weber recently became a Program Manager at the Manhattan office of Frog Design. This spring, she graduated from the Pratt Design Management program. She holds an interdisciplinary degree from Carnegie Mellon University in Communication Design and Psychology. She maintains a blog called Resolving to Innovate, which was inspired by one of  the posts she wrote for CATALYST.