Building an international reputation through art can make significant contributions to the economic growth and urban development of cities. When cities expose their appreciation of art and design, one can see economic potential, including resiliency, a richer cultural heritage and continuous evolvement. Furthermore, people are more likely to innovate in exposed environments. 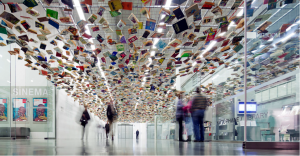 Istanbul, enriched by the distinctive cultures of Europe and the Middle East, is one of the most inspiring metropolises in the world. As a member of the European, Mediterranean and Asian communities, the city has an eclectic environment that enables various formations of art. In Newsweek, August 25th, 2005, Istanbul was claimed to be “on the cusp of change”, identifying how the diversified nature of the city affects the growth of people from within, creating new businesses across various industries. 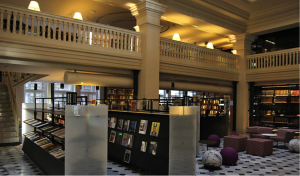 The contemporary culture of the city has attracted the attention of many people over the past few decades. The increased number of art districts stimulates urban development, and helps the tourism industry grow. The city is now hosting several events and cultural activities, such as global conferences, biennales, and festivals. Additionally, exhibitions have enabled transformation through art, providing a more creative dynamic in social interactions. This trend can be found in the workplace as well, with the growth of technology altering the way people think, reviving the creative business ecosystem. 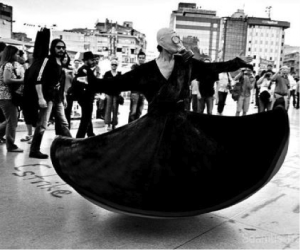 Protesters try to tell their resistance to police and the government about the violent acts happening in Gezipark by using art and literature, June, 2013

The city has witnessed a high level of self-expression by the young generations, who possess different backgrounds and skillsets. During political incidents that occurred during the summer of 2013 at Gezi Park, Taksim protesters expressed themselves in new ways. The Taksim protests started over the protection of a local city park being taken over by the government for urban development plans. Subsequently, additional protests took place across Turkey over a wide range of concerns, mostly regarding freedom of expression without government involvement. People from all over the world exhibited the truly transformative power of art during protest camps; they built libraries and art installations to reveal the potential threats to Turkey’s secularism and sovereignty.

Creative dynamics at the camps brought protests to unexpected levels; social media was bombarded in an effort to suppress the media censorship. Weekly discussion forums, as well as recitals, and other performances, were initiated to create an awareness about freedom and peace through art. Tremendous amounts of illustrations, slogans, and videos were created and shared among millions of people every day through various social media platforms. The level of self-expression and humor displayed for these protests truly reflected people’s experiences and captured the energy that was absorbed from the creative environment of the city.

Istanbul undoubtedly has the greatest potential for economic advancements by new business acquisitions, enabling more cultural activities. The city can be the pioneer for future strategic initiatives, to connect with the creative business environment, and also to create opportunities for social innovation. Fostering strategic development initiatives for prosperity is a key solution towards reviving the social and economic innovations in Istanbul, a city that has and will continue to witness cultural richness and creativity. These efforts will enable the city to have higher prosperity, while inspiring other cities to enrich the world.