The European Union released the Innovation Union Scoreboard 2010, which is an assessment of innovation performance in EU member states in the last year. The Innovation Scoreboard includes the relative strengths and weaknesses of each EU member’s research and innovation systems. Main categories cover enablers, firm activities, and outputs. “Enablers” describes the basic elements that lead innovations, like HR, Finance and Research systems. “Firm Activities” shows measurements such as firm investments, linkages & entrepreneurship, and intellectual assets. “Outputs” indicate benefits that innovation brings to the economy as a whole, like economic effects. 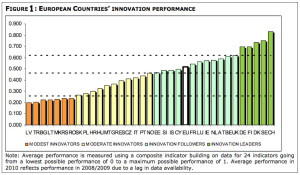 Countries have been placed in 4 levels according to different innovation performances. As the figure 1 shows, Denmark, Finland, Germany, and Sweden all show performance well above that of the EU27 average, indicating that they are innovation leaders. The second group, innovation followers, includes above-average countries such as Austria, Belgium, and France. The third and fourth groups are those countries that are weak in innovation. Greece, Italy, and Portland are all below the average level of innovation performance. 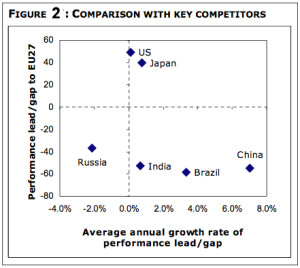 The 2011 Scoreboard also makes comparisons between EU Member States, other European countries, the US, Japan, and other countries. Figure 2 shows the comparison with key competitors.