i Am Here Series: Bárbara Arredondo Empowers Women to Lead Their Communities to Peace

Executive Summary
Bárbara Arredondo is a noted cultural curator, a journalist who writes about peace building, and a peace entrepreneur recently named a global shaper by the World Economic Forum. Her hometown of Monterrey, Mexico was once considered one of the safest cities in Latin America, until the city became afflicted by violence of drug cartels in recent years. Arredondo is leading the design of a new chapter for Monterrey, and has created a platform to empower the community’s women to become vital influencers and shapers of positive change. With her mission in mind, she launched the first chapter of the i Am Here Series in Monterrey in 2012 as a platform of conferences and workshops where women where can recognize their potential and vital role in designing peace at different levels in their communities.

Introduction
In 2011, Bárbara Arredondo organized a gathering of 6,000 peacemakers in her hometown of Monterrey, Mexico for a weekend of intensive conferences and workshops with notable figures ranging from the Dalai Lama to Iraqi-born women’s activist Zainab Salbi. The following year, she launched IListen – a design thinking consulting agency that creates and curates experiences that redefine human potential. The i Am Here Series was its first project. In this article, Arredondo describes in her own words what the i Am Here Series platform is and shares her own journey. 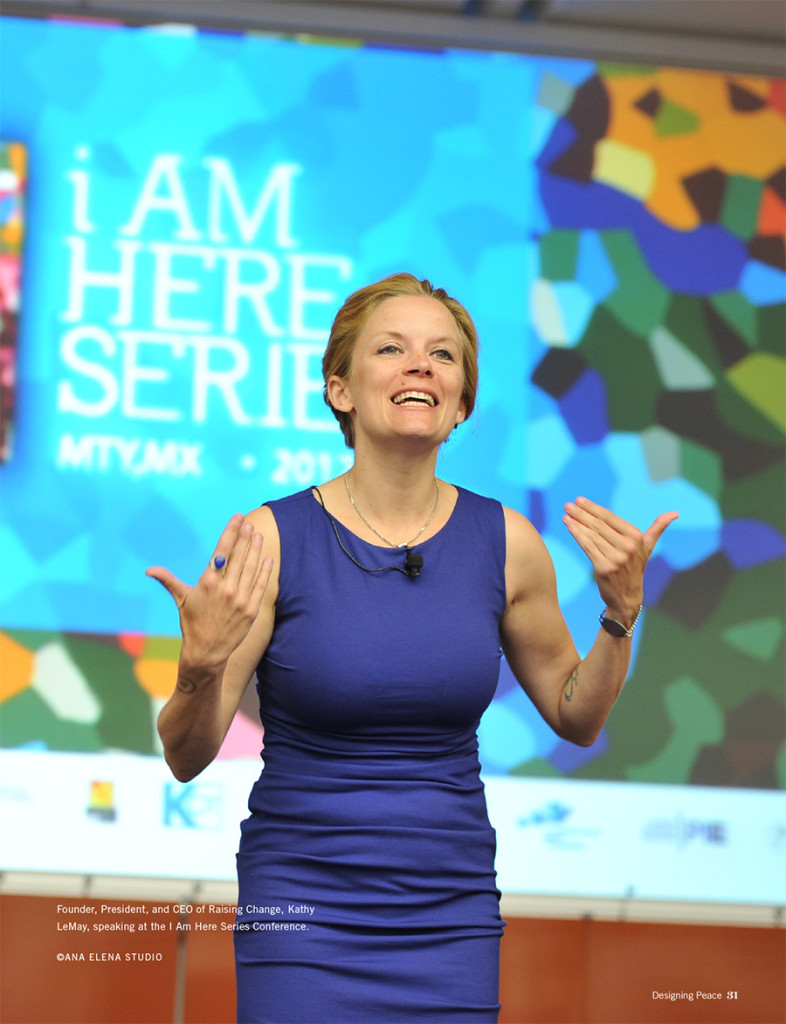 I do not know much about war, but I have been actively learning about peace, and peace starts from within. I came to this personal realization on August 25, 2011 when over 50 people died during a narco-terrorist attack at a casino in my hometown of Monterrey, Mexico. The news spread across the world. This appalling incident sparked a shift in Monterrey, from one of the safest cities in Latin America into one of the hot spots for drug-related violence. Hate and hopelessness soon became an engrained part of our city’s atmosphere.

When I was a journalist, I was eager to write stories that presented my city and my country in a positive light, to help uplift and comfort our people during these chaotic times. However, I realized that I could not catalyze peace through my writing alone. I realized that I could not solve my city’s problems myself. I needed to bring people together. I needed to have hundreds by my side. Together we might heal our own personal emotional wounds as well as those inflicted on our communities by empowering Monterrey’s women to design peace into everyday experiences, structures and objects. Together we can build the resilience vital to our communities in this constantly changing world. It was then that I decided to be a peace entrepreneur. By stepping outside of my own comfort zone and home of Monterrey and visiting a place suffering from disaster, I found the inspiration for how to begin my work.

Inspired by Resiliency and Hope in the Most Challenging Circumstances
In 2011, I was invited to speak at Byakko Shinko Kai’s (BSK) inspiring Symphony of Peace and Prayers annual event in Japan. BSK, a Japanese organization founded in the 1950s, is dedicated to world peace and raising the consciousness of everyone on Earth. During my stay in Japan I visited Tohoku, the most damaged region by the earthquake and tsunami of March 2011. As I stepped off the bus, the silence and emptiness were overwhelming. I stood amongst utter devastation, a place where homes with families once shared thousands of moments as a community was now desolate. As overwhelming as it was, an enlightening moment occurred. In the midst of the great silence I began to feel a sense of hope that the city would recover faster than one could imagine. After all, it is in our nature as people to overcome adversity. Tohoku made me realize that we must celebrate our time on Earth even though situations out of our control will always happen. There are ebbs and flows in life, and no matter how much devastating situations impact us and how much joy they take from us, we need to be agile and resilient to reorient ourselves to peace.

In the most devastating situations, creative thinking can play a critical role, helping us to re-examine our circumstances and identify opportunities to bounce back and design peace. This particular trip influenced my personal outlook on how humans deal with chaotic environments. It was the impetus that led me to create the i am Here Series as a platform to communicate to people in Monterrey that we cannot let environmental situations ‒ in this case drug-related violence ‒ dictate our future. Our people, especially women, need to discover our strengths and opportunities to bring back peace and unity to Monterrey. It is about taking reality in our hands. For me, the challenge was to create the platform to communicate that possibility to the community of Monterrey.

Building a Platform for Unity and Empowerment
In its first edition, the platform was designed for 300 women to come together for four months to experience inspiration, support, and human contact through lectures, workshops, and community building projects. Influential women from around the world came to Monterrey to share their personal stories, challenges, and successes. Guest speakers and participants included world game changers such as documentary filmmakers, Abby Disney and Jennifer Siebel Newsom; co-founder of the Peace Alliance, Marianne Williamson; singer and song-writer, Patti Smith; founder of Women for Women International, Zainab Salbi. Each of them set the foundation for our community’s participants to become empowered by the idea that they can affect change. With every talk, conference and workshop, there was an invitation to understand ourselves better and to step outside of our comfort zones.

Leveraging the Strengths of Others Towards a Mission of Peace
One of the i Am Here Series partners during those months was Zihaume Mochilla , which means ‘Women with Hope’ in the Nahuatl language. This organization was founded in 2003 and focuses on educating women of the Nahuatl community in the area of Nuevo León, Monterrey. Besides celebrating their heritage as indigenous people; women take Spanish classes, library and computer courses, violence prevention classes, and programs to develop skills sets that enable them to shape their community and create extra income. 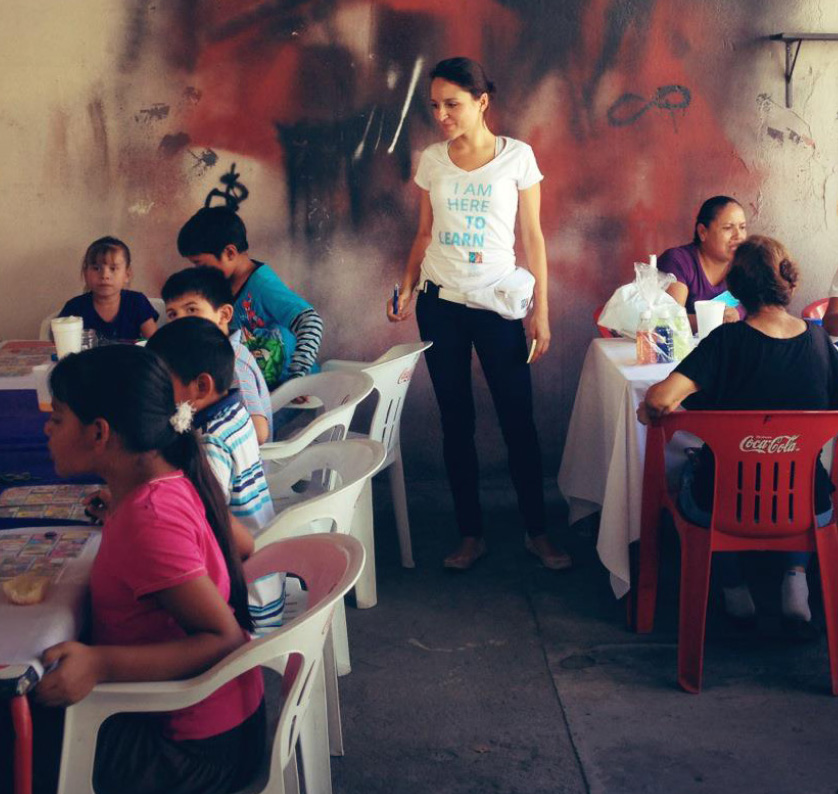 The interaction between the i Am Here Series and Women with Hope left participants from both groups with a profound sense of responsibility for the development of their communities. Participants were enthusiastic that this interaction was the starting point of something bigger than them; they felt able to work together toward the common mission of ‘designing peace’ within their communities.

The Key Component to Designing Peace for Monterrey’s Future
To design peace it is critical for women to be fully present in the process. It is vital for women to understand how relevant and powerful their contribution can be in decision-making processes within their communities. Their empowerment can lead to the creation of critical solutions to complex problems. Before the i Am Here Series, the majority of participants had never engaged in any humanitarian or community-supporting initiatives. Even though they were fully aware of how important it is to develop these systems, people were afraid of what could happen if they interacted with well-known dangerous areas of the city. During the i Am Here Series, participants were awakened to their potential for shaping peace in their own lives and were encouraged to leverage their different sets of skills in order to magnify their impact in their communities. Gradually, woman within the community began to connect with each other. Although most participants were acquaintances through the program, over the course of the program they began to work together in more honest and meaningful ways. Some began projects of their own for their children and schools and others for their businesses. The women of Monterrey were empowered to change the circumstances of violence in their community and the I Am Here series provided tools and strategies to help them bring peace back to Monterrey.

Through the i Am Here Series, we are not only empowering women to believe in the possibility of peace for Monterrey, but also empowering ourselves as sponsors and supporters as results of our interactions within the platform. Our needs, skills, and strengths fuel each other’s passion and commitment. This inspired the mantra of the platform: I am here for you. We are not alone. We aim to build peace through our common ground, celebrate our uniqueness, grow from our differences, and design a dignified, self-supporting system for ourselves and for future generations.

In order to ignite a conversation and to design peace in the 21st century we must address the issues from a positive perspective, one of hope and possibility rather than one of tragedy and doom. From hate to love or war to peace, our everyday choices determine our reality. We need to start celebrating our time on earth with the utmost joy. We need initiatives that remind us that there is always something we can do even when we feel powerless and that peace within oneself leads to peace for our community. In conclusion, if peace and joy are what we are seeking; we need to allow ourselves to be entrepreneurs in the area of peace. We need to be open to the idea that we absolutely have each other and that without hesitation i Am Here for you, and we together can promote and design peace.

STRATEGIES IN ACTION:
Recognize your potential; magnify it with your community.
Ownthe problem so you have the proper insight to design a solution.
Builda community. Creating peace is not a one-woman show.
Identifypeace stakeholders in a community.
Connectpeace entrepreneurs at different levels of the society. 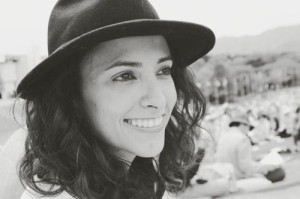 Bárbara Arredondo, Founder and CEO, IListen & i Am Here Series

Bárbara Arredondo is a noted cultural curator and journalist in peace building. Bárbara worked as content director for the Second & Third Worldwide Meeting on Human Values and as ED tech project manager for EducarUno and Kiran Bir Sethi. She has advised diverse projects and events such as the Lincoln Center Institute’s Imagination Summit and the Newark Peace and Education Summit. In 2012, she launched IListen – a design thinking consulting agency that creates and curates experiences that redefine human potential. Her first project began as a 4-month series called i Am Here Series – a platform featuring conferences and workshops where women were able to recognize their own potential to craft positive and meaningful change in their communities. Early this year the World Economic Forum named Barbara as a Global Shaper.