Transforming Medellin, Colombia From a City of Fear to a City of Hope
by Design 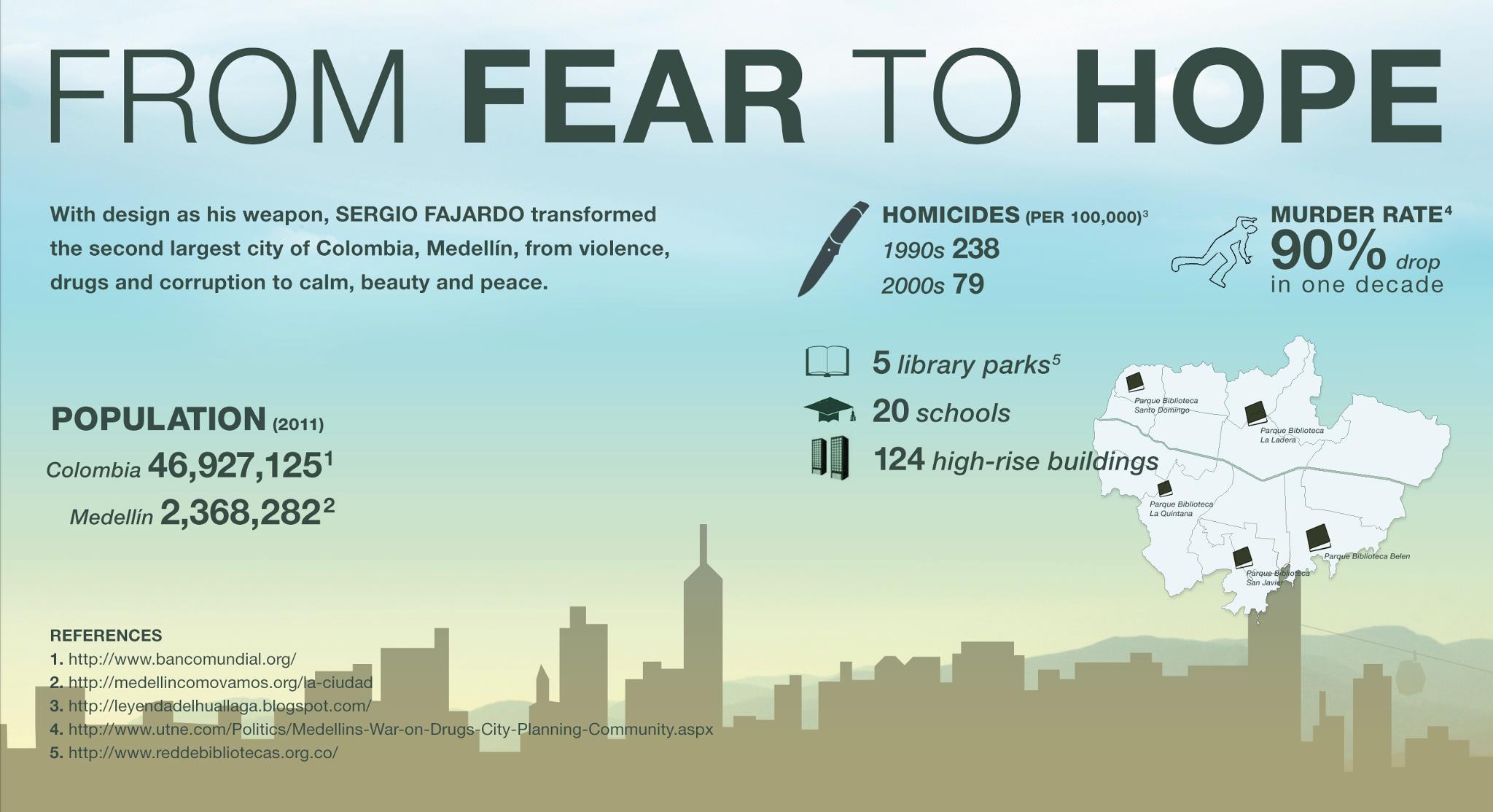 With design as his weapon, Sergio Fajardo transformed the second largest city of Colombia, Medellín, from violence, drugs and corruption to a place of calm, beauty and peace. Fajardo, a former mathematics professor, was appointed mayor in 2004, at a time where the concept of peace in the city seemed hopeless. However, Fajardo began working towards peace from his first day in office. The newly elected mayor built a foundation to design peace by identifying key areas of focus such as education, social responsibility, and urban renovation. With his efforts, new construction and renovation for public use began to cover the city with a new outlook, hope.

Believing that “aesthetics is a tool for social transformation,” Fajardo was committed to implementing architecture, infrastructure and design to transform the city. The primary areas addressed were Medellín’s poorest and most dangerous neighborhoods. Fajardo believed that the most vulnerable communities needed and deserved the best of the best. As he once stated, “the most beautiful for the most humble.” With a limited budget, the designs for public buildings were realized through open competitions, giving local architects a unique opportunity to promote their work and contribute to the social and urban transformation of the city.

Over time, violence was replaced by awe-inspiring public architecture, creating a sense belonging throughout the city. New schools, low income housing, community spaces, and library parks emerged. The term Parques Biblioteca (Library Parks) was born, describing new cultural centers where people can meet and participate in educational and interactive activities that help to strengthen their community.

Fajardo’s main objective was to transform the community’s behaviours by improving their physical, cultural and educational environments. One of the most famous projects that came to be during this period of time was, Parque Biblioteca España. This building was designed by Colombian architect Giancarlo Mazzanti. Parque Biblioteca España was constructed in 2007, and is located on top of a mountain in the neighborhood of Santo Domingo. It is made up of three complex buildings with exteriors resembling the mammoth stones and rocks that already exist within the surrounding landscape. This project was just one among several implemented during Fajardo’s time in office.

Today, Sergio Fajardo is well remembered by the citizens as the mayor who led Medellín “del miedo a la esperanza,” in English meaning “from fear to hope.”

His impact was so strong that future mayors readily continue his vision. Fajardo is currently governor of Antioquia, and he hopes to become Colombia´s next president. Fajardo has proved that it is possible to govern in a strategic, responsible and transparent manner, even in the presence of deeply rooted corruption. Colombia has a long history of violence and social inequality, made worse by a lack of community and education. Fajardo gave Medellín the hope it had lost twenty years before, and the rest of the world an admirable example of how the power of design can make peace and social transformation a reality for even the bleakest of places.

“Fajardo believed that the most vulnerable communities needed and deserved the best of the best. As he once stated, “the most beautiful for the most humble.”