Is Groupon creating a new trend or are they simply using new technology to capitalize on a human behavior that has been around for decades? It seems every generation has had its own version of Groupon, each spawned by wanting more for less. There’s a natural desire to want to make a deal. My frugal gene is quite dominant, but I question Groupon’s potential for longevity.

From the 1930s to the 1970s, S&H green stamps were recognized for successfully aggregating tie-in opportunities nation-wide. The penny saver came along in the late 1940s. By the early 1960s half of US homes cut coupons. Then, of course, came credit card inducement programs. 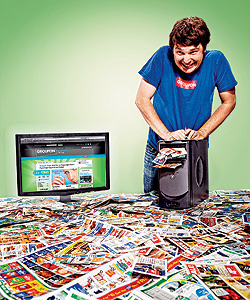 For Groupon founder Andrew Mason, success is not only about the deal-of-the-day. It’s also driven by good timing. Consumers are especially cost conscious and investors are hungry to find the next Facebook.

In addition to launching the right technology at the right time, Mason creates value by adding a fun factor. Groupon is tapping into impulse buyers with “I’m bored” and “I’m hungry” options. Groupon also uses digital technology’s ability to segment, localize, and expedite offerings, as well as social media’s ability to create demand in order to create competitive advantage. This is all adding up; according to March 17th’s Bloomberg Businessweek, Groupon is projected to generate 3 to 4 billion in revenue this year.

In April 2010, Groupon was valued at $1.4 billion, sought $3 billion in funding in the fall, snubbed Google’s $6 billion buyout, and, according to two sources, is considering an initial public offering that would value it at up to $25 billion. Bloomberg Businessweek quotes Starbucks CEO and Groupon board member Howard Schultz: “I candidly haven’t witnessed anything quite like this. They have cracked the code on a very significant opportunity.”

Groupon faces challenges from competitors and may be threatened by waning consumer interest. Groupon’s competition includes other daily deal providers, but also includes Lifesta, which aggregates daily deals from Groupon, LivingSocial, BuyWithMe, and others. CNNMoney reports that since the start of 2011, online traffic to Groupon has fallen 13%.

Time will tell if Groupon can truly capture “frugal by design” and if it will have the longevity of S&H green stamps.