Can strategic design create environments that enhance wellbeing and healing? The Meyers Pediatric Hospital in Florence, Italy, is an example of just that. The hospital is an exceptional example of sustainable design that uses architecture as a medium to help the healing process, both for its patients as well as the environment around it.

The complex is part of a park-like setting surrounded by the Florentine hills, consisting of the original hospital structure, an early 20th century villa, and the new sustainable wing. With a green roof, extensive daylighting, prolific art and open space throughout, the hospital provides an ideal setting for healing its young patients.

The children first enter the original restored complex when admitted into the hospital – the designer, Romano Del Nord of architecture firm CPSA explains, “We wanted to create a memory of the past while reducing the stressful impact of a typical hospital structure.” The entrance, known as the ‘Serra’ (Italian for Greenhouse), is a bio-climatic hall comprised of a curved triple-height space, attached to the central wing of the villa. Its laminated wood pillars reflect the shape of the surrounding trees, and incorporate building-integrated photovoltaics that enhance the aesthetic of the facade, filter natural light and produce electricity up to 31 kWp. 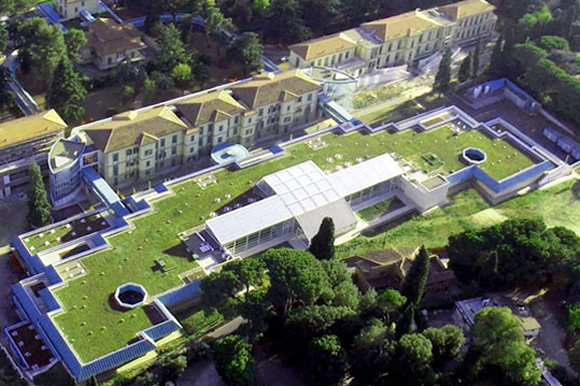 The design of the hospital was an attempt to combine old aesthetics and grandeur with state-of-the-art modernity. The development was based on the European Union’s Energy Program, and has reduced energy consumption by an incredible 62% for HVAC and 80% for electrical compared to a typical hospital.

The green roof, aside from being a sheltered, healing garden for patients, is an insulated covering which naturally lowers the temperature inside the hospital by several degrees and therefore restores the energy balance of the building. Whimsical, conical skylights in another area of the complex, called ‘cappelli di Pinocchio’ (Pinocchio’s hats), pierce the roof and together with 47 ‘solatubes’ provide the interior with natural lighting. The building is set into the hillside and has a tiered structure, which helps it to blend beautifully into the surrounding environment. The upper atrium features a play area, which opens out to the green roof, allowing the children to remain connected to the outdoors.

Ultimately, healing is a combination of intrinsic and extrinsic influences, which can be enhanced by strategic design. “Meyer is the original outcome of a long-standing Italian tradition of childcare: a tradition that believes in children’s dignity with a commitment to the highest levels of care,” says Meyer’s CEO Tommasso Langiano. CSPE and Anshen + Allen collected extensive data during the design and development process, including information on infant psychology, health management, environmental psychology, and even suggestions from 500 Florentine children. The result is a response to the challenge of creating a successful example of architecture that utilizes psychology in order to create a hospital for the future.