GERMAN TRACES NYC: An App that provides a walking experience of German heritage

Through the use of the camera and other sensors in smartphones, Layar Augmented Reality incorporates educational videos, photos, and sounds over the user’s surroundings, connecting the learner with more meaningful content. To experience the Layar Augmented Reality, you must first download the free Layar app and then search for “Goethe-Institut” under “Geo Layers.”

Through the mobile web interface users can create a customized walking tour based on location and the amount of time he or she would like to spend exploring. The length of the tour can range from one hour and 15 minutes to five hours. If a user clicks on the name of an attraction, the website provides a description, address, and a suggested amount of time needed to explore. To start using the mobile web interface, enter http://m.germantracesnyc.org. 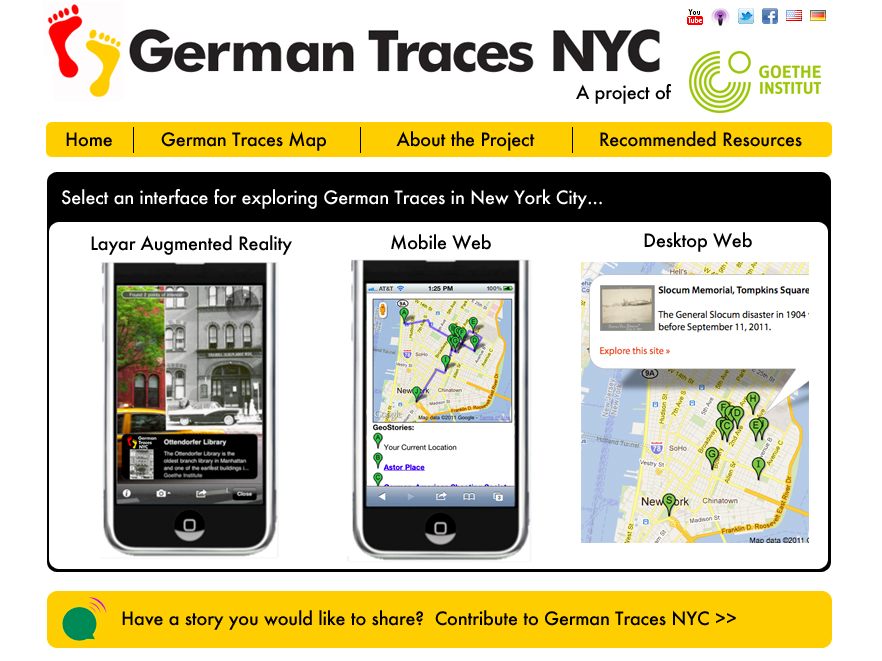 The desktop web interface lists several types of attractions for users to choose from to get full information of event description, address, and a suggested length of time needed to explore. All three of these methods include fully informative archival documents, photographs, and multimedia narratives.

German Traces NYC shows how integral German immigrants were in the development of New York City. “Over the years, however, the community assimilated and dispersed, but not before it left an indelible mark on the city. Since that time, New York has been built up and torn down, both by design and by tragedy, but if you look close enough, you can still find traces of the German immigrant experience hiding throughout the city’s corridors.” German Traces NYC is an engaging way to do just that and with three different methods to do so, there is an option for everyone.