Frozen Desire: The Meaning of Money

In this historical account of the origins of money, author James Buchan crafts a meandering book of money’s rise, fall, adaptation and role in the function of society. The basis of Frozen Desire is rooted in an observation first attributed to Aristotle, who identifies that the natural purpose of money is to gain the necessities of life.  However, Aristotle noted that money could also be used to gain wealth through trade or lending. This dual purpose of money as both currency and capital is of great importance to the central discussion of the book, as it is in the secondary function of money as capital that desire is bred, for there is no limit to its pursuit.

The text is composed of eloquently written stories of money and its connection to significant dates on the timeline of human and social development. Buchanan investigates the role of money in multiple arenas including politics and property, warfare, classical antiquity, the life and death of Christ, and in currency’s social identity as “coined freedom” in European, Japanese and American societies. In each historical example, Buchanan abstracts facts that support his argument that money is “incarnate desire,” that “mobilizes wishes” with both positive and oftentimes perilous results. 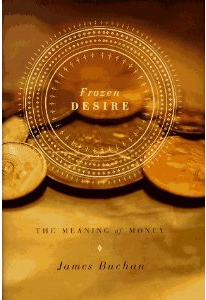 Fraught with more questions than it answers, Frozen Desire is an essay of cases of how money was transformed from being a “conveyance of desire to the object of all desire.” In the closing chapter, Buchanan identifies the desire to attain wealth as the cause of multiple present day problems including extinction, loss of natural resources, and global warming. He closes with a vision of a world where money loses its value, and nature regains hers. “People will not accumulate [money], because it will not bring them the fruits of existence but rather will destroy them; because it does not create true wealth but destroys it. As interest and profit fall away, human beings will at last recognize the nature of their wishes and at last be able to satisfy them. They will cease to injure the objects of their desire. Humanity will be at peace in the world: at home, as it were, at home.”