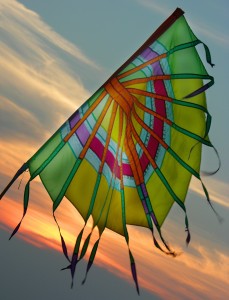 Flying Paper is a documentary about a group of children in Gaza, collectively attempting to break the world record for number of kites flown simultaneously. The documentary was screened on the 27th of June 2013 at the 12th Conference of Interaction Design and Children, at The New School in New York City. The conference discussed the latest findings and innovative methodologies of child centered design, learning and interaction. This year, the conference focused on supporting DIY/maker culture among children and global inclusion, particularly for marginalized children worldwide. The film was directed by Roger Hill and professor Nitin Sawhney. Sawhney, also the conference co-chair,  presented the documentary as an example of how educating children in media and digital story telling can benefit them. The film also served as an introduction to Sawhney’s media initiative Voices Beyond Walls, a program designed to teach marginalized children new media techniques that assist them to partake in the global conversation regarding the issues they face.

A Boy’s Life in Gaza

Musa is an ambitious young boy from the small town of Seifa in Gaza. Seifa is the closest town to the Israeli blockade border on Gaza. The sight of military watchtowers and tanks is a normal one here, even for the children. Children like Musa have learned to cope with extreme social and political conditions. In Gaza, 98% of children have witnessed or experienced a war trauma. As children try to engage in normal childhood activities like playing catch or soccer with friends, chances are high that external inflicted injuries will result- even death is likely in this military blockaded area.

A large number of schools have been demolished and over a third of Gaza’s schools are running on double shifts one group is hosted in the morning and a second group in the afternoon. The fuel shortage has restricted parents from driving children to school, teachers from reporting to work and forced children to walk long distances to school and back. Reports have portrayed student failure rates as high as 80% in the weakening school system. Half the youth will not have future job opportunities. Presently, 34% of their existing workforce is unable to find jobs. Children like Musa have a very challenging future waiting.

Since the 2007 military blockade, Gaza’s population has suffered from fuel and electricity shortages, sometimes up to twelve hours a day. Almost half the population battles with food insecurity on a daily basis and 80% rely on foreign aid, which for many, has declined tremendously. The water from its water aquifer is undrinkable and the situation is degrading. Gaza is one of the most densely populated regions on earth. Its population is 1,763,387 million, 1,167,000 of who are refugees. Alarmingly, more than 40% of its population is under the age of 15 and 60% is under the age of 24; and comprises the youth of Gaza. Children like Musa, who are deserving of life’s most basic needs are most impacted by these conditions.

Empowering the Impoverished through New Media

In 2006, Professor Nitin Sawhney and a collective of independent media technologists, filmmakers, photographers, and educators co-organized an initiative entitled Voices Beyond Walls, as a way to raise awareness of issues faced in Gaza and to engage affected youth directly. Voices Beyond Walls is a participatory program that “supports creative expression and human rights advocacy among impoverished youth through digital storytelling workshops, new media production, and global dissemination of their work.” Voices Beyond Walls also has a Media Barrios initiative, sponsored by MIT Jerusalem project 2050, which fosters cultural expression by connecting disenfranchised communities through centers focused on media and the arts.

Voices Beyond Walls conducted a digital storytelling workshop focused on Gaza’s youth called The Re-Imagining Gaza Program. The children who attended the workshops were largely responsible for the production of Flying Paper; some even took on starring roles. Twelve children, all under the age of sixteen, were divided into six production units. Each unit was provided cameras, was responsible for creative writing, scouting locations, conducting interviews, photography, as well as held partial responsibility for the cinematography.

The documentary follows a group of young children around their neighborhoods, as they prepare kites for the record-breaking event being held in Gaza, Musa is one of those children. We are drawn into his story, a young boy who wants to build “the best” kite at the event. We watch Musa tirelessly build kite after kite with his limited arsenal of twigs, newspaper and wheat paste. He and his young cousins had all learned this craft from their grandfather who years before them had shared this favorite pastime. The choice to follow Musa seemed a natural one; he is a charismatic compelling young leader, wise beyond his years.

We watch Musa grow and continuously problem solve through his challenges. The young boy, determined to film parts of his project from an aerial perspective, required building a special kite to support the weight and movement of his video camera. The dizzying top view footage may not have been the most successful, but Musa’s resilience and innovative spirit is exceptional and inspiring.

As the film develops we are introduced to the second character, Abeer, a young girl from Jabaliya refugee camp. Abeer was one of the children who had attended a Voices Beyond Walls workshop and was brought onto this documentary as a co-producer before Sawhney decided to cast her as one of the leads. Abeer aspires to become a journalist and helped coordinate all interviews and scout locations for Flying Paper.

With a population living under siege and access to rudimentary education, the workshops presented by Voices Beyond Walls are a rare opportunity for these children to expand their horizons. Typically a girl Abeer’s age (16) would soon be married off; however, having been exposed to this storytelling and media workshop, Abeer dared to pursue a career in Journalism. Sawhney, impressed by her capacity to learn, her professionalism and drive, asked her to join the team and help produce Flying Paper.

At one point in the film, we are treated to a beautiful view of over 7,200 kites soaring through the sky. The vision on the screen heightened a curiosity and wonder about each and every one of the 6 thousand children living there; what were their stories? While Gaza may be the land of plenty in population, very few have access to basic necessities. In spite of this, we watch these children face each obstacle in stride and empower themselves through hope. Art and media can provide children the tools to create peaceful opportunities for their future.

We have seen numerous programs around the world introducing marginalized children to art, design and media. One example is El Sistema, which was introduced by social economist Jose Antonio Abreu in Venezuela. The program has been running since 1975 and has numerous extensions around the world; it provides free orchestral music training to underprivileged children.

Designing opportunities to expose children to media and the arts helps with integration and social cohesion, and provides them with tools they can use to lead productive lives. El Sistema, for example, uses the orchestra as a metaphor for community, it teaches children to work in groups aligned together toward a common goal. It teaches them about strength in collaboration. It provides children with opportunities to carry themselves and their families toward an improved economic status, hence providing them recognition within their families. The program highlights the talents and skills of the children to create a unique voice through music, and hopefully newly developed respect within the family dynamic.

Leading as if Life Matters

To move forward, designing programs like Voices Beyond Walls is essential, it enables children to participate and take an active role in their lives and provides them with tools with which to work. Teaching these children that they are in a position to tell their own stories is empowering. Involving them in all aspects of production gives them a sense of purpose, which will in turn translate to other parts of their lives. They will learn that they can be part of a much larger global conversation and find confidence in being able to share their personal perspective.