Designing for Preventative Health – Part One

How designers, alongside doctors and other medical professionals, have a direct responsibility to ensure public health.

An interview with Dr. Adrienne Sprouse, Medical Director of the Environmental Medicine Center in New York City
Conducted by Maren Maier
This is part one of a two part article. Part two will publish on Wednesday, October 15th

Dr. Adrien Sprouse discusses her initiatives and efforts to reform healthcare in taking a more preventative track. Dr. Sprouse believes that by avoiding key hazardous chemicals in the design of everyday things we can save ourselves from major health issues and also reduce overall healthcare costs. Through design, we can benefit our personal health, and our bottom line. In light of this Dr. Sprouse believes that strategic design is in a position to play a major part in preventative care.

The U.S. Government recently overhauled one of the world’s largest public health care systems, yet most Americans remain unclear about their prospects for affordable health care. Interest groups and policy-makers jockeyed for influence throughout yearlong negotiations, but the debate side-swiped a crucial problem underlying the entire system- the effect of environmental toxins on our health and the crucial importance of preventative care. As many stakeholders may see a chapter closed on healthcare, Dr. Adrienne Sprouse believes it is essential to re-visit the conversation and prioritize preventative care by getting the right people at the table, starting with designers.

Dr. Sprouse, Medical Director of Manhattan Health Consultants Environmental Medicine Center in New York City, is steadfast in her belief that true health lies in one critical act of preventative care: avoidance of chemicals. A long bout of unexplained and debilitating symptoms sparked her interest in a career in medicine, where she later crossed paths with a Doctor of Environmental Medicine. Together, they discovered the root of her problem was chemical exposure, and after a series of treatments, she regained her health and went to medical school to practice the medicine that saved her life.  Traditionally trained, she has focused her medical practice on Environmental Medicine for the past 15 years.

Dr. Sprouse’s personal story is not an aberration. The truth is, millions of people walk about their daily lives with chronic conditions that nag at their wellbeing. We are taught to suppress the symptoms with the latest dosage of over the counter or prescription drugs. Unknowingly, many more of us are exposed to hazardous substances at home or in the workplace and may not feel the effects of exposure until years later. One telling example is asbestos. Found in siding and building insulations of older buildings, asbestos is linked to lung diseases and lung cancers. Evidence suggests that asbestos damage often does not appear until 20 years after the exposure. Unfortunately, the Environmental Protection Agency (EPA), the federal watchdog for the health and safety of our environment, currently does not test for the effects of low-dose long-term exposure to many commonly used chemicals.

Unknowingly, many more of us are exposed to hazardous substances at home or in the workplace and may not feel the effects of exposure until years later

While most of us are now informed about the hazard of asbestos, there are tens of thousands of chemicals that are used in manufacturing and circulated through commerce in the U.S. alone. In fact, over 85,000 chemicals are registered with the EPA, as mandated by the Toxics Substances Control Act (TSCA). However, most of these chemicals were simply grandfathered in when TSCA became law in 1976, with no requirement that they be tested or shown to be safe. Only 200 have ever been tested for their effects on human health, and none have been tested in combination to monitor the interaction of compounds on a molecular level. Many of these chemicals are tucked away in products, buildings, and environments used by millions of Americans in their daily lives and are understudied and largely unregulated. 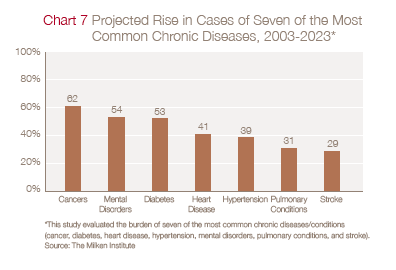 Environmental and medical scientists have long suspected a connection between exposure to environmental toxins and the increasing incidence of chronic diseases. As chemicals have become more pervasive in daily life over the last fifty years, scientists have developed a more complex understanding of how exposures to chemicals can contribute to serious illness, such as cancer, reproductive and developmental disorders, neurological diseases, pulmonary heart disease, diabetes, stroke, and asthma.

The rise of the use of chemicals of concern also parallels a simultaneous rise of chronic disease in the United States. According to the U.S. Centers for Disease Control and Prevention (CDC), 133 million people in the U.S.—almost half of all Americans—are now living with chronic diseases and conditions, which now account for 70% of deaths.1 Studies also show that developed countries, most notably the United States, have the highest percentage of cancer cases per capita in the world.2

Incidentally, both the use of chemicals of concern and cases of chronic disease are expected to rise in the decades to come. According to the latest reports, chronic diseases are expected to rise between 29 – 62% by 2023, and the use of chemicals of concern is expected to increase a little over 200% within the same time period.3 In their recent annual report, the President’s Cancer Panel stated their concern that the true burden of environmentally induced cancer has been grossly underestimated, bringing more credibility to a largely under-represented issue.4 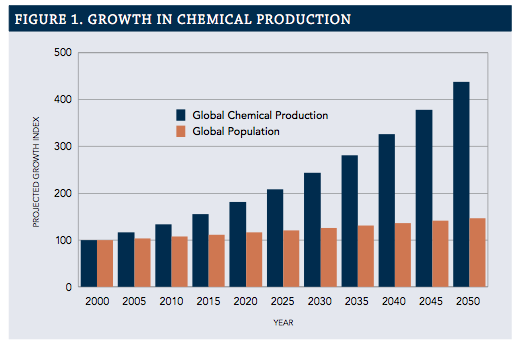 In light of these changes, the field of Environmental Medicine has garnered increasing respect within the medical community. Established in the 1960s to treat allergies and asthma in children, Environmental Medicine physicians were the first to link toxins in our environment and medical illness, and pioneered successful treatments with children. These doctors equate the liver to a wide-mouth funnel. When we inhale or come into contact with chemicals, the toxins enter our bloodstream directly. When the blood circulates through the liver, there is a finite rate of clearance, and if the level of toxins exceeds the rate of clearance, the chemical impurities remain in the bloodstream and are eventually stored in fat tissues, muscles, and the gall bladder. The accumulation of toxins over time leads the body to malfunction and this process triggers disease.

Environmental Medicine physicians were the first to link toxins in our environment and medical illness, and pioneered successful treatments with children

As seen with asbestos, symptoms ranging from headaches, nausea, dizziness, muscle aches, and stiffness, can take years to accumulate. At the Manhattan Health Consultants Environmental Medicine Center in New York City, founded in 2006, Dr.Sprouse uses certain blood tests to pinpoint the presence of environmental toxins in the bloodstream or urine of children and adults.

Fortunately, exposure to most toxic chemicals can be medically treated. Once diagnosed,Dr. Sprouse prescribes avoidance of toxic exposures, then a targeted medical regimen of high dose vitamin, mineral, and amino acid intravenous treatments along with a heat depurations chamber to augment the liver’s ability to metabolize the accumulated toxins so they can be excreted.Dr. Sprouse also provides allergy desensitization to molds, trees, grasses, and foods, as well as some specific chemical exposures. The success stories are numerous.

Jonathan was, a 60-year old executive who developed severe memory failure, fatigue, and word-searching difficulties after exposure to mold in the basement of his apartment building.   He also developed food allergies and inhalant allergies, especially to mold.  Jonathan underwent a comprehensive treatment of chemical avoidance, nutritional supplementation, desensitization, and heat chamber detoxification, resulting in improvement in all of his symptoms and allowing him to remain at work.

Donna was a 45 year-old teacher who developed breathing problems, fatigue, and thyroid disease after exposure to repeated water leaks at her school. She underwent treatment of avoidance, desensitization, IV nutrition, oral nutritional supplementation, and heat chamber detoxification with improvement in all of her symptoms.

Peter was only 8 and suffering from Attention Deficit Disorder, asthma, and eczema when Dr. Sprouse measured petrochemicals in his blood and determined he had a severe allergy to inhalants and foods.  Now 21, he is completing his third year of college without any psychiatric medications.

Yet despite Dr. Sprouse’s successes at her clinic, she believes people should not have to reach the point of Environmental Medicine treatments. Testing and treatment is expensive and not adequately covered by health insurance, which can keep the necessary medical care out of reach for many. Americans already face rising health costs that could likely jeopardize the affordability of insurance coverage and lead to higher rates of personal bankruptcies.

Part 2 of this article will be published next wednesday, October 13th.

There are many things you can do to control exposure to environmental toxins in the home. As a rule of thumb, remember the big five: TVOCs, Temperature, Humidity, Particulates, and Mold.

Here are some common steps to take:

Use low or no-VOC paints, building products, wood furnishings, cleaning, and personal care products (generally products with no or low odor, and no formaldehyde)

Use integrated pest management instead of pesticides for pest control.

Avoid fabrics, upholstery, and mattresses that are treated with flame retardants

Use atomizer applicators rather than aerosolized products

The Asthma and Allergy Foundation of America www.aafa.org

Dr. Sprouse is court certified as an Expert Witness in Environmental Medicine.  In the past she has also served as the Environmental Specialist for Fox Good Day New York, and has been interviewed on many television programs including ABC News, NBC News, New York One, and the Tony Brown Show in addition to interviews in the Daily News, New York Times, New York Post, New York Health and Hospital News, and Big Apple Parent.