George Miller, the current president of the American Institute of Architects and a local practitioner, opened the fifth annual Fit City symposium at the Center for Architecture, in Manhattan, by challenging the crowd to rethink the planning, architecture, and design of our metropolis, with the goal of encouraging physical activity and healthy lifestyles. Our city is in the midst of a health emergency: 43 percent of elementary school children are overweight or obese, and diabetes rates are climbing, driving health-care costs up and life expectancies down. Clearly, a shift in mind-set is needed. “Ninety percent of the game is half mental,” Miller quipped, channeling Yogi Berra, master of the malaprop. That morning in May foretold an era of collaboration between policy makers and the creative community. Fit City 5, a partnership between the local AIA chapter and the New York City Department of Health and Mental Hygiene, attracted stakeholders from public health, education, and design as well as other concerned citizens.

The commissioners (looking fit, like Mayor Mike, who leads by example) gave an update on their efforts. David Burney, of Design and Construction, said the city’s new Active Design Guidelines are frequently downloaded to addresses far and wide. Janette Sadik-Khan, of Transportation, said the Street Design Manual stresses sustainability, while the “Look” campaign focuses on etiquette to promote safe cycling. Amanda Burden, of City Planning, talked about new zoning regulations that encourage the development of neighborhoods where cars aren’t necessary. Parks and Recreation’s Adrian Benepe reported that hundreds of school playgrounds are being turned into parks, wheelchairs can now get on city beaches with help from special mats, and Blue Cross and Equinox are supporting public-exercise programs. “Health is profitable,” he added. 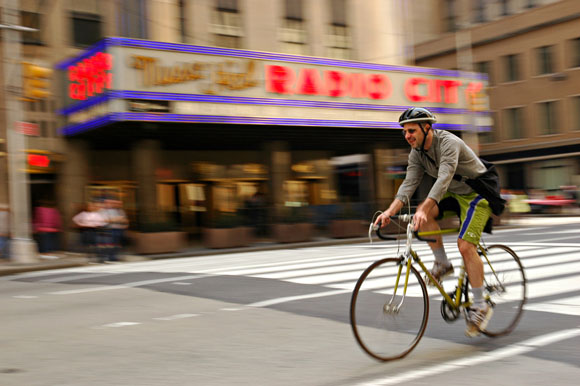 In addition to creating neighborhoods where children can walk to school and play outdoors, and where people can buy fresh, locally grown food, a fit city must also pay attention to the design of its interior spaces. The health-care specialist Robin Guenther, of Perkins + Will, drew a correlation between the severity of illnesses and increased energy use in hospitals. Smart planning can save fossil fuels and encourage exercise by slowing down elevators, making stairs visible and attractive, and putting them where people gather. Les Bluestone, a developer, described housing built for first-time buyers with rooftop hydroponic gardens for growing their own produce.

On that balmy spring day, it became clear that New York’s policy makers have joined designers in an effort that is more comprehensive and complex than any single department. They are challenging themselves, and designers, to rethink our aging, unhealthy buildings while celebrating our famous urban density. As I write this, I’ve received an invitation to join a group at the national AIA convention this June to discuss ways to develop research and connections among architects, the USGBC, the Centers for Disease Control and Prevention, and the National Institutes of Health. The solutions we come up with must be “half mental,” as Yogi might say.