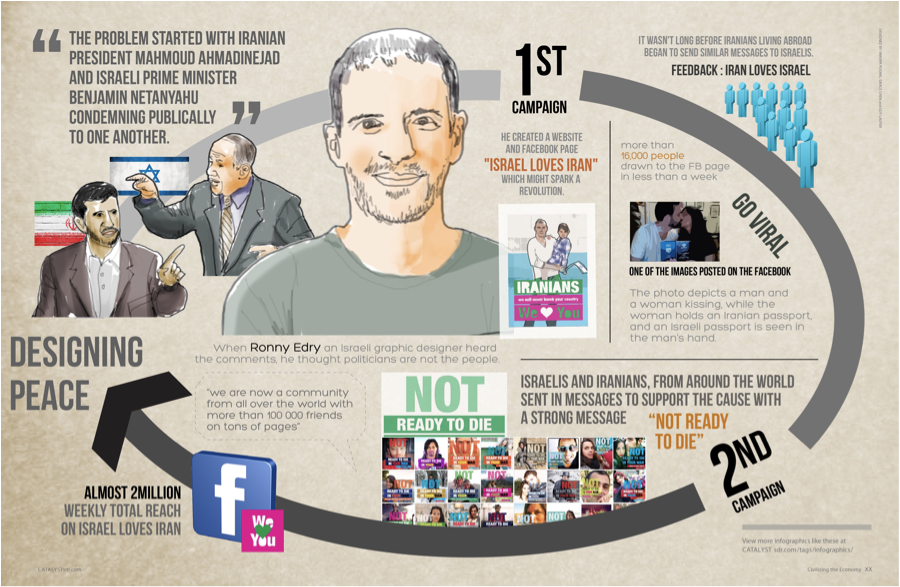 Design as a Common Language: Ronny Edry Designs Peace in the
Middle East

There are roughly 6,900 recognized languages spoken around the world. While this figure is astounding, it does not even include local dialects or unofficial languages. As a society we are highly reliant upon our ability to verbally express ourselves in order to communicate with one another, yet what happens when there is no common language?

Resorting to gestures and social cues as a means of communication becomes our first instinct; however, we cannot always rely on being able to speak face-to-face. This inability to communicate effectively affects us in a much greater capacity than we realize, as language plays a fundamental role in linking perception to reality. The Sapir-Whorf hypothesis states, “language determines how we perceive and think about the world.” The absence of language can distort our perceptions; therefore, potentially affecting our reality. Language does not only influence our reality, but also our sense of culture.

“Iranians, we will never bomb your country. We heart you.” This was the Facebook post Israeli graphic designer, Ronny Edry sent to Iran in March 2012. With Israel and Iran on the brink of war, Edry realized now more than ever he needed to communicate with the people of Iran before it was too late. What followed was an online movement for peace fueled by design. The response to his poster was almost immediate. This was a huge shock to Edry; “you have to understand we [Israelis] don’t talk to people from Iran.” The power of this dialogue was amplified as Edry began designing posters with his friends, colleagues, and students. Through this he designed a movement that all Israelis could participate in. Furthermore, creating a common language.

Yet after a few weeks something even more astonishing happened – Iran began to respond back. It became a truly unique dialogue that had never happened before, with Israel and Iran spreading the same message – peace. In less than a year Edry’s Facebook page has reached 106,000 likes and approximately 2 million people on a weekly basis. He has truly shown what the power of one person can do. What started out as a simple campaign to communicate with Iran has turned into a global peace movement that continues to grow at a rapid rate.

It is time to communicate in a way that can be understood on a global level. Using Edry as a model we can see that designing sustainable peace for tomorrow is indeed possible.