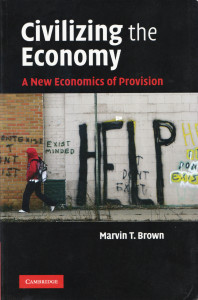 Civilizing the Economy: A New Economics of Provision

In order to understand the ideas in Civilizing the Economy: A New Economics of Provision, by Marvin Brown, one has to have a basic understanding of classical economics and the work of Adam Smith, namely the Wealth of Nations. It is there that Brown begins his contrasting philosophies regarding the state of the world’s economic welfare. He argues that classical economics has gotten it wrong all of these years because it is based on traditional Smithian principles, which were in themselves ultimately flawed. This has positioned the state of the global economy as it is, which as Brown reasons, is destined to fail if not changed. He cites many parts of Smith’s work that have shaped the economy in an unsustainable way. His most central and poignant theory: “Smithian economics created a blind optimism by omitting the story of slavery, the notion of divine providence silenced the moral question of whether it was right to exclude former slaves from the national story.”

Brown expands on this idea in Civilizing the Economy when he states that the silence was a denial, allowing, “a different story to be told, a story that made it that much more difficult to tell the truth.” He presents the idea that society should abandon these economic theories of the past, which are steeped in the denial of their human authors, unable to separate property and people.

His book offers a remedy for the Economics of Property that are currently in place due to the orthodoxy of Smithian principles found in modern economic theories. Brown identifies what he believes will be a sustainable economic system, the Economics of Provision. The difference between the two is that one is, “based on property relations…the accumulation of property,” the other is, “based on civic relations and focuses on the making of provisions.”

Brown continues to support his theory using a full spectrum of examples founded in society and civic behavior, employment, government systems, and the modern use of money as commodity versus credit.

This is a profound book, which proposes a bold new vision that is inspiring to readers. Brown’s ideas are fresh and undeniably an essential reading for those willing to approach the economic and ethical issues of the world today. With Civilizing the Economy: A New Economics of Provision, he envisions a new economical framework, and in doing so has empowered his readers with an authority to design a more just and sustainable world.