Clean water. It’s something most of us in the developed world take for granted. We can buy it for a few dollars at the supermarket and we get it pumped into our homes everyday. It’s something we can’t imagine going without. But for some people clean water is an elusive, inaccessible resource. In countries like Ethiopia, for example, residents will travel miles to gather water, even if it’s not clean. This results in untold amounts of disease, wasted time and hardship for these communities. charity: water is a non-profit designed to raise money and awareness to help alleviate this problem. 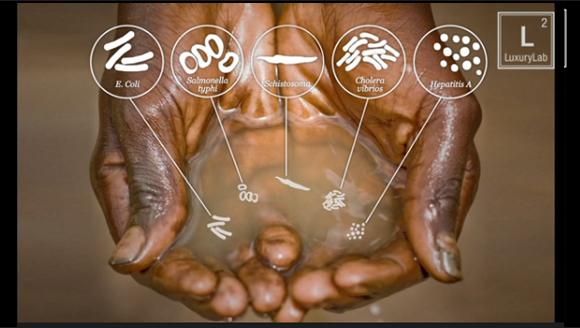 A number of harmful diseases are acquired from dirty water including E. Coli and Cholera.

Scott Harrison, the founder of charity: water, has an interesting background. For ten years he was one of New York City’s preeminent club promoters. Then one day, he had an awakening. He realized he needed to be doing something more important with his life. On his 31st birthday, he asked people to bring a gift of $20 in cash to his party instead of a present. A total of 700 people came to his birthday party, all of which brought the requested $20. Harrison used this seed money to create charity: water. He took the money raised from this one party and invested it into community water projects in rural Africa. He and his team were able to build clean wells, which had a ripple effect throughout the community. Disease decreased, women regained lost dignity from no longer having to haul water for miles each day and people generally became happier. This also created the motto of the organization: water changes everything.

Harrison expanded his idea and repeated the model of sacrificing his birthday for charity while encouraging others to do the same. Since then, he has successfully used design to create a model for global altruism. This is much harder than it sounds. As Harrison discusses in the video below, people are averse to making charitable donations because they do not know where their money is going. He has solved this problem for his organization using all the available design and technology he has at his disposal. To reassure donors that their money is going to a good cause, he launched a website last fall, my charity: water, where people can donate money and see the proof of their donations’ impact through photography and GPS. Additionally, he has designed the site so other people can launch their own fund-raisers, empowering people to contribute and solicit donations on their own. This creates a personal connection between the donor and the donation recipient, providing those who contribute with tangible proof of their philanthropy.

charity: water also used traditional advertising campaigns to promote its cause throughout New York City. It launched campaigns successfully equating private school children on the Upper East Side to poor rural students of Africa. Imagine if residents of Park Avenue had to lug gasoline cans full of water to school everyday? The charity water design team created attractive e-cards for holidays that successfully tied donors back to the cause and raised awareness while it simultaneously celebrated Christmas, Easter and other important dates. Saks Fifth avenue even got in on the action by giving up its storefront window for a week and replacing designer clothing with charity: water promotions. Stores began to compete with one another to see who could raise the most money. This effort alone raised $700,000 and helped create 140 community wells. 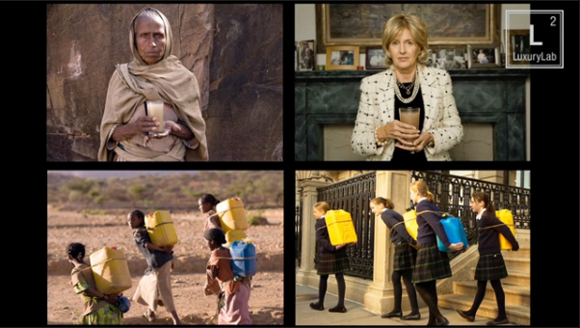 One of a series of ad campaigns equating members of rural Africa to privileged New York City residents.

To date charity: water has raised $1,516,350 resulting in over 300 water projects in the developing world. Using the my charity site, anyone can set up fund raising efforts and help get their friends, family and colleagues involved in the fight to provide clean drinking water for those who need it most. Visitors can also track the progress of projects charity: water is involved in around the world through photos, reports and GPS overlays using google maps.

This is a successful example of the use of design to make a difference. Yet, it all seems so simple. Imagine sacrificing a mere $20 a year and funneling it towards a cause. In our first term at the Pratt Institute’s Design Management program, six groups were each assigned a global topic. Water was one of them. The others were food, carbon and the environment, education, displacement and transportation. Any one of these issues could benefit from a charitable model like this one. I can easily see this applied towards improving the quality of education facilities and supplies in the worst parts of the world or helping to provide aid for those currently displaced in Chile and Haiti. Design can make a difference. This project is proof of it.