CATALYSTS: Journey to the Heart of New Orleans

Building and learning with New Orleans Area Habitat for Humanity 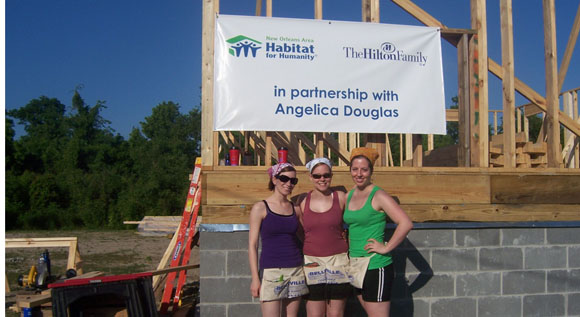 On the morning of Monday, April 20th, Phyllis, Becky and I woke up at the crack of dawn and set off for Newark Airport. Although it appeared that we were just beginning our journey to New Orleans, the journey had actually begun months earlier over beers at a bar near Pratt Manhattan while unwinding after class. We talked about our shared passion in helping empower communities to rebuild after devastation. Fast-forward through many conversations and hours of research; we were on our way to volunteer with the New Orleans Area Habitat for Humanity.

We are Masters students in the Design Management Program at Pratt Institute. Together, we formed a team called (RE)build in preparation for our senior thesis. Phyllis Frantantoni is a senior web designer. Becky Duignan is a LEED Accredited Professional interior designer. And I am Holly Burns, a painter and illustrator turned designer.

The following is a brief documentation of how we spent five days at the end of April building and learning with New Orleans Area Habitat for Humanity.

On the first morning, we were greeted by Habitat for Humanity Construction Supervisor, Terry Cooney, who put us to work along with the 75 Canadians and approximately 10 other Americans who came to volunteer.

Our team of three focused on three houses over the next five days. We worked on a variety of projects ranging from building and raising exterior walls to ensuring roofing was built to code. Over those five days we had conversations with Terry about the energy-efficiency of the Habitat houses, about how they acquire their materials, about construction and life in New Orleans post-Hurricane Katrina, as well as conversations about the community and his personal experiences in New Orleans. We also learned about Habitat’s sweat equity requirements: how homeowners and their families are required to volunteer their time and give back by building other Habitat homes.

Terry and his colleague, Chris, kindly offered to take us on a tour of the devastated Lower Ninth Ward, as well as show us the newly constructed Musicians’ Village in the Upper Ninth Ward.

What we saw in the Lower Ninth Ward was a community that, even four years after Hurricane Katrina, continues to struggle. This area is one of the most at-risk areas for future hurricane damage because of its proximity to the levy. Habitat for Humanity does not rebuild in the Lower Ninth Ward as it is many feet below sea level. However, Make it Right, assisted by Brad Pitt, builds with the fragile ecology of the Lower Ninth Ward in mind, as people still want to return to their homes there.
Image courtesy of: http://convert-solar.com/assets/habitat_logo.jpg

The Musicians’ Village, in the Upper Ninth Ward, has fared better. It looks much more prosperous with the many finished and colorful Habitat for Humanity homes in which local musicians now reside. These houses are so colorful that some people say it looks like someone scattered a bag of jellybeans around the area. It was great to see how successful the labor of coordinated volunteers can be, reminding me of the Margaret Mead quote, “Never doubt that a small group of thoughtful, committed citizens can change the world. Indeed, it is the only thing that ever has.”

Later in the week, Terry invited us to a barbeque that a local Habitat for Humanities homeowner was throwing. The three of us, along with Terry and Chris and local community members, indulged in Southern hospitality and home cooking, while the homeowner told us how grateful she was to Habitat for Humanity.

After my experience with Habitat for Humanity, my feeling about New Orleans is that it has an overwhelming sense of community that inspires me and reminds me that life and love can return to places that have seen the worst of times.
It also reminds me that rebuilding in communities that have been damaged is part of the healing process.

My teammates and I are considering directing our thesis towards community development including affordable housing and water collection, or disaster relief through building with local or reused materials, etc. While we are still deciding in which direction to focus our thesis, we will keep all that we have learned in New Orleans close to our hearts as a resource and a reminder as to why we are doing what we are doing. In New Orleans we were able to obtain a foundation of understanding about the complexities of disaster relief so that we can build our ideas upon that foundation.

I am grateful to our new friends, Construction Supervisors Terry and Chris, to the homeowner who allowed us into her home, and to the people of New Orleans who graciously thanked us every chance they had when they heard that we were there to help.

Holly Burns is currently a graduate student in the Pratt Design Management program. Holly lives and works in Washington, DC, and when she’s not working, doing school work, or commuting to the New York City campus she enjoys painting, reading, being outdoors, and volunteering with various organizations including Habitat for Humanity. Holly earned her Bachelor of Fine Arts from the University of Wisconsin-Madison and still proudly calls herself a Badger.