The New York City Bus System
The New York City Transit Authority (NYCTA) serves over 666 million people each year. With 4,373 public buses, it represents the world’s largest fleet. The bus systems’ success is in servicing routes that are not reached by the subway system.1
In general, buses stop every two blocks making them agonizingly slow, but for those who have the time to spend, it can also double as a scenic tour of the city. Buses spend 30% of their time waiting for passengers to board and exit, in addition to traffic congestion, frequent stops, infrequent service in some areas and no signal synchronization.

However, they still service a broad sector of riders. MTA buses are much more handicapped accessible than the NYC subway system with accommodations for wheelchairs and fewer steps to deal with. In addition, the bus is a popular mode of transportation for K-12 students traveling to and from school. 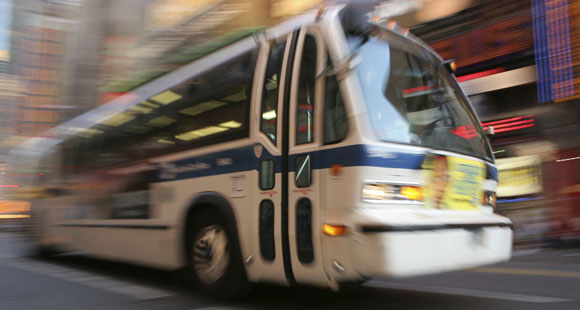 Bus Rapid Transit
Bus rapid transit (BRT) is seen as an additional surface solution to the mobility needs of urban citizens and one that is quicker and more time efficient. The goal of bus rapid transit is to improve trip and wait times. This is accomplished through more frequent service, fewer stops, multiple points of bus entry rather than just one and customers pre-pay; therefore, there is much less wait time. Benefits of this solution is that the cost of implementation is significantly less than the addition of subway stops and lines due to the ability to utilize existing infrastructure. The following are national and international examples of the successful implementation of a surface bus rapid transit system.

Global and Local Success Stories
Curitiba is a compact city in Brazil. Its five main radial bus lines are only about six miles long. Prepayment of fares and level boarding, systems typically found in rail systems, create a very efficient boarding and de-boarding process. A bi-articulated bus (a 5-door, 82-foot bus built by Volvo which is currently used only in Curitiba) with a load of 270 people can board or de-board in about 20 seconds. The average speed of buses using the bus way is 13 miles per hour–twice the estimated speed for buses operating in the same Curitiba corridors in mixed traffic.

The TransMilenio is a bus rapid transit system that serves Bogotá, Colombia. TransMilenio consists of numerous elevated stations in the center of a main avenue. Users pay at the station and await the arrival of the bus, whose doors open at the same time as the sliding glass doors of the station. A dedicated lane on each side of the station allows express buses to pass through without stopping while other buses stop to allow passengers in or out. The buses are diesel-powered, split into two sections with an accordion-like rotating middle to allow for sharp turns, and have a capacity of 160 passengers.
Boston’s Silver Line is one of the United States’ largest BRT examples to date. The Silver Line Waterfront’s underground stations (South Station, Courthouse and World Trade Center) feature elevators, escalators and electronic message boards along with artwork and seating. The Silver Line uses a fleet of high-tech, 60-foot, articulated buses. The buses’ three wide doors, low-floor design and simple-to-deploy ramps allow easy access for riders with wheelchairs, walkers, strollers and everyone else.

The Design Challenge
Where we see an opportunity to improve the bus rider experience through bus rapid transit is to introduce an intelligent and sophisticated online network that is linked to the GPS system incorporated within the bus system. The goal of this service is to notify customers in real time of service schedules and arrivals in addition to delays and interruption. It is also to increase bus ridership through the use of community networks by providing scheduling and bus updates to enhance the rider’s experience. Typical target users include tech savvy riders between the ages of 15-80 years old, including the disabled population, the elderly, working professionals and teenagers who use the bus to go to school.

SOLUTIONS AND RECOMMENDATIONS
Technology is always evolving and customers are continuously adapting to it and finding new ways to use it in order to make their daily lives more efficient and easy. eMarketer estimates that in 2008 nearly 80 million people, 41% of the US Internet user population, visited social network sites at least once a month, an 11% increase from 2007 (emarketer.com). By 2013, an estimated 52% of Internet users will be regular social network visitors. Teens are a huge consumer market segment and spend more than $100 billion annually. Today, approximately 79% of all teens (17 million) have a mobile device – a 36% increase since 2005.2 Most teens have a conventional cell phone while about 15% own a smart phone. “More than one-half of people ages 65 to 69 are on-line. Internet-using 70-to-74-year-olds make up 45% of people that age, according to the Pew Internet & American Life Project.”3 The following solutions are based on keeping these statistics in mind. 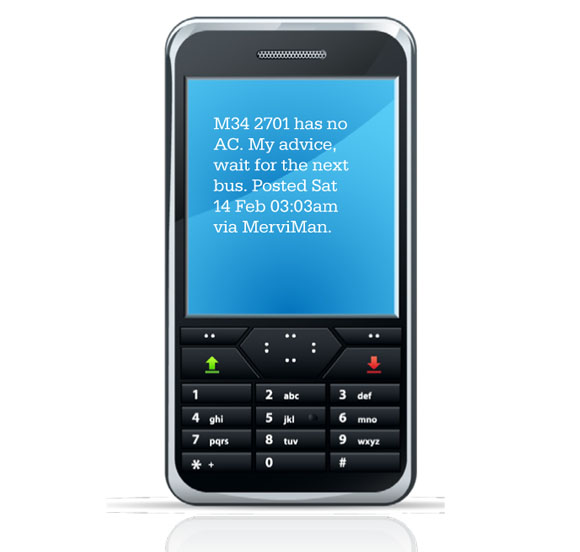 Example of an SMS message posted to a bus community by a commuter and associated with a specific bus using GPS technology.

Example: Metro Transit, the transit agency serving the Minneapolis-St. Paul metropolitan area, has recently installed Automatic Vehicle Location (AVL) systems in its fleet of buses in an effort to improve service quality. These systems utilize Global Positioning System receivers to determine the exact position of each bus. This information is commonly used by bus operations centers to determine whether buses are adhering to their schedules, and can also be used to provide updates on arrival times at major transit stations.

2. Introduce digital displays. Initial introduction will be on major intersections throughout the city to display the exact time of bus arrival at a stop using the same GPS technology. The GPS system will provide coordination between the operation of computerized traffic signal controllers and the movements of buses using wireless data transmission, which are designed specifically for use in vehicle-to-vehicle. This enables communication between vehicles and infrastructure systems. This would be an added convenience to the passenger and will also help increase ridership of the buses.

Phone System
GPS technology can be combined with cell phone technology to form downloadable software onto passengers’ cell phones. Websites such as Google and/or Facebook could be utilized to make such software available, free of charge, to the public. This would enable the passenger to gauge exactly how far the bus is from the stop while sitting in the comfort of their homes or workplace.

Online Communities
Building an online social networking community, either a subset of existing services or a new online community built by the MTA, will enhance the New York bus riders’ experience. This enhancement will include more information to aid customer knowledge, such as: location, speed of travel, trouble spots, or general riding experience. Information provided will inform customers in live time on what is happening in the NYC bus system.

Data Generation – Microblogging
The first step of engagement with customers is to generate a data stream of information that can then be filtered into several types of online and mobile communications platforms. This can be done through microblogging, which is comprised of small messages, similar to text messages, that utilize only a low number of characters, (i.e. twitter messages have a maximum of 160 characters), are entered by a user, then fed into a data stream. The following are some ideas about how the MTA and individual riders could contribute to the data generation through microblogging:

MTA contribution #1 Bus GPS tracking system, from above, sends out a signal every time a bus passes a specific stop or marker along its route. Simultaneously this signal is converted to a text message that is sent to the online feed of the specific bus routes user group (the buses will also need assigned individual numbers in addition to the route number).
Example: As the M34, (bus no. 2701) bus passes 7th avenue and the GPS recognizes it, a microblog is automatically uploaded that reads: M34_2701 passes 7 Ave – 05min29sec behind schedule. Posted Sat 14 Feb 03:03am via GPS.

MTA contribution #2 The MTA needs to release a statement or alert to its ridership. This messaging can be limited to alerting a specific route or even location within the route.

Example: The Eastbound M34 needs to be diverted on Saturday, February 14th. Bus system employee in charge of alerts sends out a message. A microblog is automatically uploaded that reads: All M34 Eastbound Divert to 32 St between 5 Av and 3 Ave until further notice –Posted Sat 14 Feb 03:03am via MTAlerts.
Individual user contribution #1 The bus riding community can upload text messages from their mobile phone or computer. They will have an online user ID that makes their “posts” automatically routed to their specific bus routes user groups (the buses and bus stops will need to post clear numbers identifying both the route numbers and bus numbers).

Example: The M34 bus that just passed 7th Avenue has no air conditioning. Passenger MerviMan is annoyed and sends an SMS message to the M34 online community. Using GPS the MerviMan’s location is determined and the specific bus he is on is tagged in his message. MerviMan’s actual message is illustrated to the left. Individual user contribution #2 The bus riding public can offer positive and negative feedback on the bus experience, the individual drivers, or even the condition of the bus itself.

Example: MerviMan has a problem loading himself, his daughter and his stroller onto the bus. The bus driver is very helpful and Merviman wants to thank him publicly. MerviMan sends a SMS message to the M34 online community. Using GPS the MerviMan’s location is determined and the specific bus he is on is tagged in his message (MerviMan’s actual message): M34 2701 Driver extremely polite and helpful. Posted Sat 14 Feb 03:03am via MerviMan. 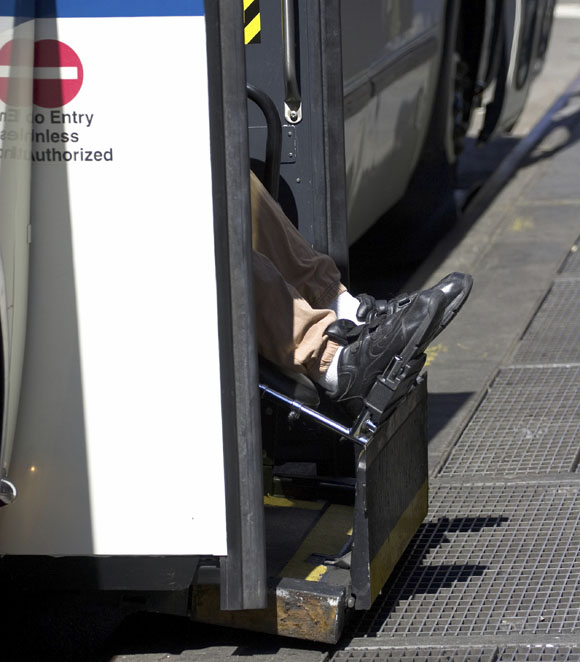 Data Retrieval
Riders without User Accounts On the simplest level, anyone with a mobile phone can go to a bus stop, see the assigned numeric code for that particular stop and send a text message on their phone to that assigned number. They will immediately get a status update, via text message, sent back to their phone.
Riders with User Accounts If a rider sets up a user profile on the MTA Bus Social Network, they can personalize their settings in many ways.
Mobile phone applications for smartphones (i.e. Blackberry, IPhone) Custom applications can be built for smart phones that include features like bus schedules, (already offered by Google), realtime tracking of customer and nearest buses/bus stops that are identified by route and locations.

This integrated technology communication system provides the ability to track bus arrivals at each destination. Riders are able to check the closest available bus as an alternate means of transportation when a bus is having difficulty making its scheduled time. Quick accessibility to bus information, delays and schedules will help customers to arrive at their destinations on time and to know when to find an alternate route.

This will also help the city to provide better service, which will in turn, increase ridership. Increased ridership allows for increased service, which is a nominal cost compared to that of adding new subway tunnels and stops. Surface transportation is a cost-effective way to use existing infrastructure and resources if it provides an efficient and reliable service for its customers.