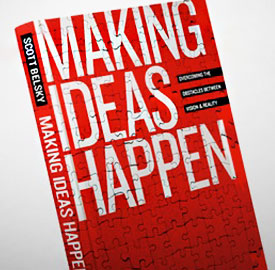 Overcoming the Obstacles Between Vision and Reality

Making Ideas Happen by Scott Belsky, is a book that claims to be a lifejacket for creatives who are unproductive or fail to see their ideas through to completion. Creatives are free flowing thinkers who don’t adhere to a set workflow — a note here, a scribble there, ideas jotted across 10 unfinished moleskine notebooks. A book like this had to be made and we’re glad Scott Belsky stepped up and tried to deliver. Ji Lee, Creative Director at Facebook has been quoted as saying this book is, “ A Swiss army knife of ideas,” so most creatives might feel compelled to pick it up. But did this book deliver or is it just another over-promised marketing hype?

Scott Belsky is a smart guy — MBA from Harvard Business School, worked with the best at Goldman Sach’s and is now CEO of Behance Network. Belsky’s been working with creative types for a while and noticed a trend. He came to realize that most of us are guilty of too many ideas and not enough action. Scott, being the businessman he is, saw a need and filled it. And from that came the Behance Network, 99% and The Action Method, all channeled into a creative eco-system. This book is a nice tie-in to those three platforms, a sort of self-promotion, which is fine — they are all mostly good quality products. So on to the review.

The book is divided into three sections — Organization and Execution, The Forces of Community and Leadership Capability (we’’ll try to sum up each section in as few words, providing the general take-away of each topic). 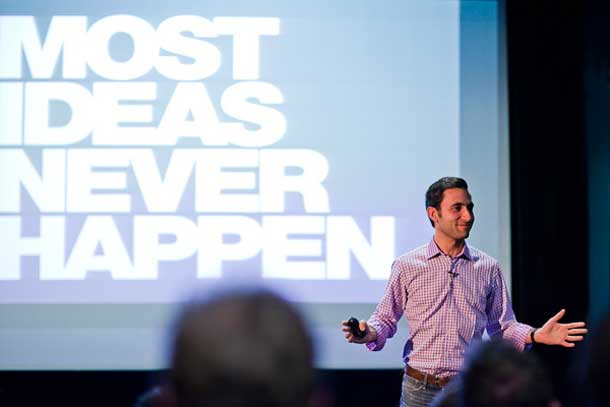 This section introduces the importance of being organized. After pages of examples of organized knowledge workers who get results, it will have you convinced that you need to find a system. A person can be a goldmine of ideas, but if none are put into action, they will go to waste. Belsky uses the formula creativity X organization = impact. This equation explains that in order to be productive both actions, creativity and organization, need to be valued.

After a few more examples, Belsky leads us into “The Action Method.” The tools used for this method are both online and on your desk. including web resources and series of special notebooks designed to make it easy for anybody to turn their ideas into actionable steps. I personally put this system to work right away and quickly came to realize it’s not new or revolutionary in anyway. Which in my opinion is disappointing since it’s a key aspect of the book. The “Action Method” is a watered down version of GTD by David Allen. I can see the benefit in Scott’s system since you can learn it in five minutes, but “revolutionary” it is not. There are more effective and simple Getting Things Done (GTD) systems that were pioneered earlier; ZTD by Leo Babauta comes to mind. However, I did find some helpful tips in the chapter, for example using the word “ACTION:” for all actionable emails and “FYI:” for reference/back burner items in the subject line. I found this to be very effective and makes important e-mails easily searchable.

The Forces of Community

This section addresses the concept of being transparent with your ideas. Discuss them openly with the community. If it is a good idea others will join in your idea to see it through or hold you accountable for taking action. This is the strongest chapter in the book, but, sadly, there’s not much information here I haven’t read in other books. A recent book by Gary Vaynerchuk called Crush it! was far more in-depth and focused on this matter, and provides excellent resources.

Scott also discusses three types of people; the Dreamers, the Doers and the Incrementalists. Dreamers generate ideas, the Doers execute and Incrementalist are a combo of both—but often take on more than they can handle, resulting in mediocre work. Many will find themselves being all three in different aspects of my life; a great way to assess one’s values. Belsky continues to break down this section into subcategories like competition, pressure of the spotlight, power of the network, the benefits of a shared workspace and self-marketing to list a few. Again, none of these ideas are new or original, but it’s a nice reminder and the strongest section in the book.

I found this to be the weakest and most disorganized section of the bunch. There were way too many ideas being tossed around and in no clear direction. This chapter felt rushed, and at times, contradictory to the other ideas presented in the book. This book contains a lot of plugs and praise for friends or associates, which is a pet peeve of mine. For example, mid-way through Belsky went as far as to write that Seth Godin’s new six-month alternative MBA program was comparable or even surpassing his own Harvard MBA. Statements like this make Belsky lose some credibility points in my book. Even though I like Seth Godin, the chances of Godin’s MBA alternative surpassing an MBA from Harvard Business School seems far fetched–shameless plug. Nothing in this chapter really stuck with me in a positive way, and it all came off like a mishmash of ideas.

Scott Belsky’s first book, Making Ideas Happen, is a good start for him, and shows how he took his own advice, accomplishing a lot professionally, and should be commended. I can see a lot of creatives getting something out of it. Having read countless self-development books, nothing in this book stands out. I can still half-heartedly recommend this to creatives and knowledge workers who want a basic primer to become more efficient and productive—everyone else should pass. Even though the book dabbles on many subjects, I just wish Scott had explored the topics further instead of playing it safe. In the End, it felt like Belsky had tons to say, but never took command of the subject matter.

Hopefully, Scott Belsky’s future books have a more polished feel with less plugs and more creative ideas. This book does deliver on ideas for improved productivity — too bad they aren’t new or creative.