Dosier’s Better Bricks have the potential to reduce worldwide CO2 emissions by millions of tons a year.

This year, Metropolis’ Next Generation competition asked entrants to invent a “small (but brilliant and elegant) ‘fix’” for the designed environment. The runners up presented concepts for everything from artificial limbs for women, to ocean filters that track and attract plastic debris. This year’s winner, Ginger Krieg Dosier, an assistant architecture professor, sprouts building blocks from sand, common bacteria, calcium chloride, and urea.

Making a clay brick in a coal-powered kiln, fired at 2,000?F, emits about 1.3 pounds of carbon dioxide. Multiply that by the 1.23 trillion bricks manufactured each year, and you have more pollution than is created by all the airplanes in the world per year. Dosier, the winner of the 2010 Metropolis Next Generation Design Competition proposes a radical alternative: don’t bake the brick; grow it .1

The process, known as microbial-induced calcite precipitation, or MICP, uses the microbes on sand to bind the grains together like glue with a chain of chemical reactions. The resulting mass resembles sandstone but, depending on how it’s made, can reproduce the strength of fired-clay brick or even marble. If Dosier’s biomanufactured masonry replaced each new brick on the planet, it would reduce carbon-dioxide emissions by at least 800 million tons a year. “We’re running out of all of our energy sources,” she said in March in a phone interview from the United Arab Emirates. “Four hundred trees are burned to make 25,000 bricks. It’s a consumption issue, and honestly, it’s starting to scare me.”1

Although Dosier’s bricks are certainly small—in lab tests so far, about the size of a Lego— their impact could resonate all over the world. Considering the prospects in countries like China and India, where outdated kilns put brick production among the top coal consumers, it is clear that the use of the bricks is a scalable, strategic redesign of what we consider building materials, and how they are made. “There was a strong feeling among the judges that the award should go to someone dealing with an issue on a global scale,” says Chris Sharples, a juror and a principal of SHoP Architects. “Here was a very simple concept defined by scientific method and an example of how you can come up with some very innovative ways to solve basic problems.” Choosing it as the winner was, he adds, a “no-brainer.” It was also a testament to the value of an architect who knows her way around a microscope. 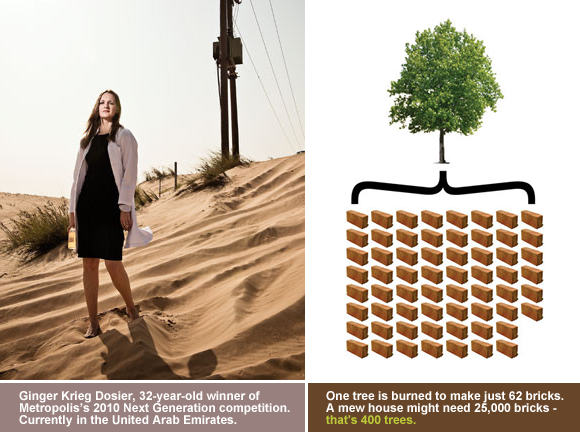 1. Place the formwork in the sand.

7. Pour the cementing solution over the sand.

11. Watch the brick harden some more.

If these bricks were adopted worldwide, they would reduce CO2 emissions by 800 million tons a year. Dosier isn’t the first to dabble at the crossroads of microbiology and chemistry, nor is she alone in trying to green the humble brick. Dosier’s act of alchemy was to apply science to design. The strategic redesign of something as simple as a building block shows that so many of the things we take for granted have profound effects on our lives, and our environments.