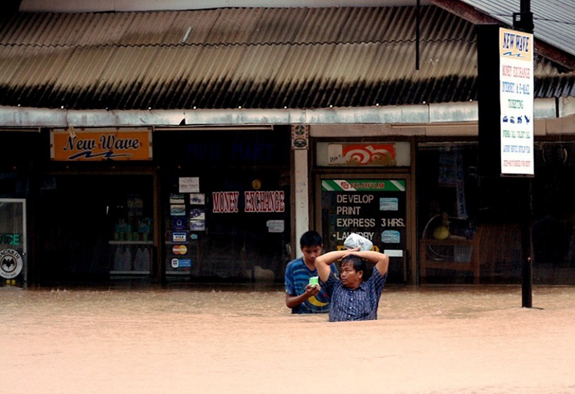 Thailand has recently found itself in the violent throws of the worst floods they have seen in past seventy-five years, with some experts predicting that it could last until December of this year. Not only has this disaster caused physical damage to the architecture and infrastructure of the region, but it has also displaced thousands of residents as the casualties continue to grow.

Over 500,000 square kilometers—an area equal to the size of Spain—are affected by the floods. According to the Thai government, more than 500 people have died, 62 of the country’s 76 provinces have been affected (including Bangkok), and the floods have impacted more than 8 million people. This damage is likely to cost more than 3.4 billion US dollars and shrink the country’s GDP by 2%. The situation has been exacerbated by the government’s slow response to the disaster, similar to how the United States government responded to Hurricane Katrina back in 2005. Like the US, the people of Thailand are suffering due to the power struggle between a centralized leader and local leaders trying to impose authority, as well as blame over one-another. Their communication breakdown and lack of response has left the public angry and confused.

However, emerging from the devastation are several design solutions aimed at alleviating the life-threatening problems that arise during response and recovery. Organizations such as Design for Disasters, are working towards providing long term solutions for the problems Thailand is currently facing. They advocate cooperation between government, the private sector, and NGOs in order to achieve resiliency, sustainability and safety for those who have been effect by the floods. Design solutions such as the “Jud Nak Bag”, a biodegradable waste bag, are being distributed for people living without access to conventional toilet areas. This product was designed to inhibit the spread of disease that can occur when human waste enters water sources. But some of the most impressive design solutions have been created by everyday citizens, including boats built with plastic bottles.

Despite the regionally specific and strategic adaptations designed by a people who have adapted to flooding as part of an annual cycle, recent times have imposed challenges difficult to overcome. Traditionally, houses in Thailand were built on high stilts due to regular flooding that occurs annually. During the monsoon season, houses would stand above the floodwater. Increasing urbanization has greatly hindered the land’s ability to adapt to floodwater, and “upgrades” to infrastructure have not been designed in consideration of the flooding that occurs during monsoon season.

The major flooding crisis of 2011 has affected countless countries around the world including Thailand, the US, Australia, Saudi Arabia, and Pakistan. Both climate change and the way we live in our industrialized and urbanized world are problems which become painfully apparent in the wake of these catastrophic events. People typically underestimate the power of nature and do nothing until the damage is already done. Band-aid solutions no longer work. It’s time to proactively reform the way we think about our lives and the infrastructure in this time of global climate destabilization.