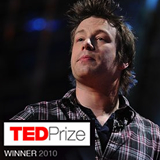 A few weeks ago, I watched Jamie Oliver’s talk on TED.com where he stated,“I wish for your help to create a strong, sustainable movement to educate every child about food, inspire families to cook again and empower people everywhere to fight obesity.” I’ve become a huge fan of his show and the conversation that it has sparked within the population. What has struck me most about Jamie’s Food Revolution is the social aspect and the subtle use of design thinking. The statistics are staggering as obesity-related diseases are the leading causes of death in America. Jamie reminds us that during his 20 minute TED talk, 4 Americans will die as a result of food-related illnesses. The effect this has had on the new generation of children growing up on processed foods is also extremely disturbing, as we have “blessed” the newest generation with a shorter lifespan for the first time in human history. Recent films such as Food, Inc. have depicted the level of artificial and unnatural ingredients used in agriculture, as well as the national demand and consumption of fast or processed foods. What is hopeful amidst all the bad news, though, is the reminder that the power to change rests within our hands as consumers and purchasers of these products. However, this is still considering the issue at a slightly shallow, economic level. To observe the use of design thinking in this revolution, we must go past the effects, statistics, even some of the causes and simply look at what motivates us to consume these products.

Jamie encourages the use of fresh, unprocessed foods and it is clear that he is concerned with the quality of the ingredients. He also reminds us that food is one of the few things that nourishes us, connects us to past traditions of our families and culture and unites communities in unique ways. He challenges us to think not only of the food we eat in terms of its components and preparation, but also the meaning of it as a human practice “to inspire families to cook again.” This is at the heart of his strategic thinking, because ultimately what needs to change is not just the label on the food, but human behavior. His reform of the British school food system is a testament to the power of this type of behavioral change; my hope is that his efforts in America will be met with similar success. Other initiatives to transform the experience of food in the education sector, even at the tertiary level, have begun to emerge successfully across America. It is clear that the public is ready for this change, for a myriad of reasons (health is one of the largest); otherwise Jamie’s show would not be such a huge success. The challenge we face now is to rethink and redesign our approach to food, so that the policies and practices currently in place become our ally in working toward a healthier population; not just because we have to, but because we want to.