Subway riders on the 7 train through Long Island City are privy to a view of the midtown Manhattan skyline and the building formerly known as 5Pointz. 5Pointz was considered to be the world’s premiere “graffiti mecca,” located in New York City. The building was a monument that fueled a profound appreciation for the creative culture in Queens and gave graffiti art a sense of belonging in New York City. The name 5Pointz signifies the five boroughs of New York City coming together as one.

The 200,000 square-foot factory building was established in 1993 as Phun Phactory, in a city effort to discourage graffiti vandalism by encouraging artists to showcase and display their work on the building. Its reputation as the epicenter of the graffiti scene attracted creative professionals, spectators, and entire tour buses full of admirers. The outdoor exhibition space was converted into thriving works of graffiti art by artists from around the world. Queens, New York, the location of the building notably recognized as 5 Pointz New York City: The Institute of Higher Burning,  is also home to various museums and cultural institutions that serve its diverse communities. Its cultural vibrancy consists of the Queens Museum of Art, MOMA PS1, New York Hall of Science, Afrikan Poetry Theatre Inc, Sculpture Center, and other more conventional art galleries.

5Pointz and its curator, Jonathan Cohen otherwise known as MeresOne to the graffiti community, fought a three-year losing battle with property owners to demolish the building after an artist was injured when an outdoor staircase broke in 2009. 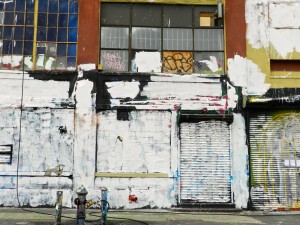 5Pointz helped elevate street-based art from the bottom of the art world. Now street art is an art medium that is sought after by galleries. Banksy for example is a British street-based artist whose work is worth upwards of a million dollars. The whitewashing and demolishing of 5Pointz caused outrage in the public. The ongoing dispute over 5Pointz’s future permanency was recently settled when the building owner, Jerry Wolkoff, painted over the works of art at night. Wolkoff’s haphazard attempt to white wash 5 Pointz happened after months of debate to make 5Pointz a cultural landmark. Mr. Wolkoff plans to demolish and replace the property with two luxury high rises, though the new development plans include a 60 foot wall that stretch around the block designated for graffiti art.

Daniel ‘Danny’ Simmons, gallery owner, 5 Pointz advocate, and older brother of Hip Hop impresario Russell Simmons, told the Guardian, “Its been a major tourist attraction for the city – a place where young and old could go for free and let their imaginations run wild. It was an inspiration to art’s free spirit and spoke volumes to artists like myself about color and form. With the painting over and razing of this building, the arts and NYC has been sorely diminished.”

The process for developing and reviewing public art and street art was at its height of popularity. Rachel Alban, in Untapped Cities, Urban Discovery from a New York Perspective, described the significance of 5Pointz in the community: “Community arts organizations such as 5Pointz are extremely important. They are artist-founded and driven, provide education and programming to youth and families, and support the arts with tiny budgets. These creative people, their works, and their energy are what make New York vibrant.”

The relocation of 5Pointz had been briefly discussed in the past by The Long Island City Parent’s Group. Kris Schrey, co-organizer of the group, suggested the works of graffiti art move from 5Pointz onto the concrete walls surrounding MoMa PS1, across the street. There has been little, if any, follow through with the idea, though it served as a catalyst from the community to support public art. Aerosol artists can either wait for the new 60 foot wall to be built alongside the high rises or go back to the origins of graffiti writing painting illegally in the streets.

Is There A Better Option that Serves the Direction of 5 Pointz? 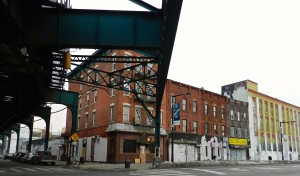 The way for rebuilding 5Pointz is still unknown. The challenge is getting on a similar working scale while reaching the same international level. The magnitude of the building creates an unforgettable experience for aerosol artists, daily commuters and tourists which is why it was so successful as a graffiti mecca. The artists freely painted outside and on any given weekend could interact with tourists of all ages from all over the globe who supported the art form. Currently Collaboration and a 501(c)3 can be an integral part of 5Pointz action plan. Support from a business initiative or different creative approaches can provide workable and sustainable solutions. Currently 5Pointz is nothing more than a storage space for food vendors and empty patches of grey and white walls for onlooking travelers on the 7 train.