Living in New York City, I tend to walk everywhere. New Yorkers, in general, walk a lot. Maybe it’s because we don’t want to get on the sweltering subway in the summertime, and maybe it’s because there is so much to see along the way to our destinations each day. Whatever the reason, being able to walk the city is a necessity for New Yorkers and with that comes a need for feeling safe while doing so. The infographic below from GOOD is a representation of cities where it’s not so safe to hoof it to work. New York falls about halfway on the scale, while Los Angeles, Atlanta, and Detroit are ranked as the most dangerous cities to walk in.  Though not a cheerful subject, it underscores the importance of the all around liveability our cities require for us to feel at home. I have previously written about biking in cities as an integral part of community wellbeing, but until now, walking had never occurred to me. It is the most basic form of commuting and as cities grow to include mass transit and more car lanes, we need to be sure to not lose track of this basic, human form of transportation. Click on the image to see a high res version. 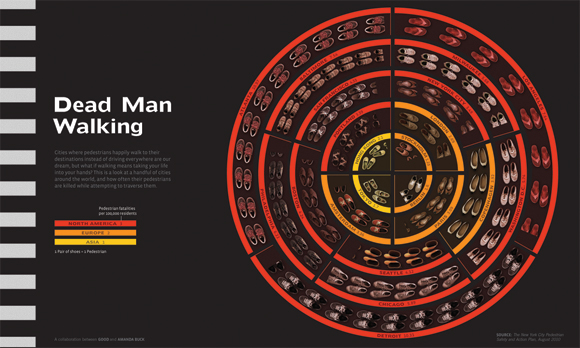